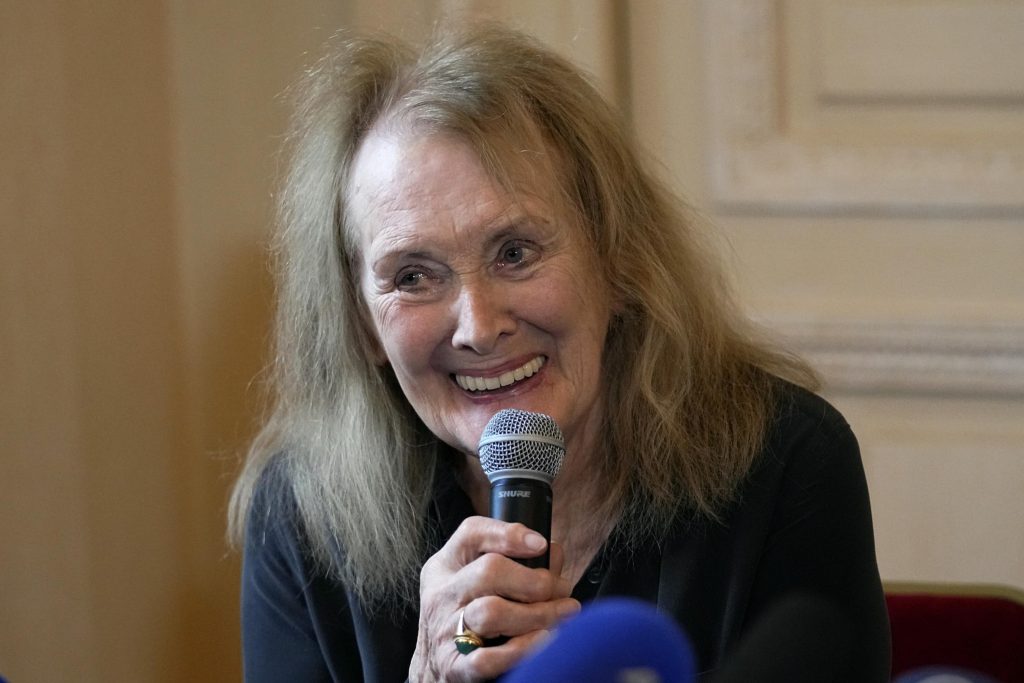 PARIS (HPD) — French author Annie Ernaux won this year’s Nobel Prize in Literature for fusing fiction and autobiography in books that boldly explore her experiences as a working-class woman by portraying life in France since the 1940s.

In more than 20 books published over five decades, Ernaux has explored deeply personal experiences and feelings, from love to sex, abortion and shame, in a society divided by gender and class.

After half a century defending her feminist ideals, Ernaux said: “It doesn’t seem to me that women have become equal in freedom and power.”

The author fiercely defended women’s right to abortion and contraceptives.

“I will fight until my last breath so that women can choose to be mothers, or not to be. It is a fundamental right,” she noted at a press conference in Paris. Ernaux’s first book, “Les armoires vides” (“The Empty Cupboards”) from 1974, discussed her own abortion performed before the procedure was legalized in France.

The Swedish Academy, which awards the Nobel Prize, said the 82-year-old Ernaux was recognized for “courage and critical acuity” for works rooted in her origins in a small town in the Normandy region of northwestern France.

Anders Olsson, chairman of the Nobel Prize committee for literature, noted that Ernaux “is not afraid to confront hard truths.”

“She writes about things no one else writes about, like her abortion, her jealousy, her experiences as an abandoned lover, and more. They are pretty tough experiences,” she told The Associated Press after the award was announced in Stockholm. “And she gives words to those experiences that are very simple and powerful. They are short books, but they are really moving.”

French President Emmanuel Macron tweeted: “Annie Ernaux has written for 50 years the novel of the collective and intimate memory of our country. Her voice is that of the freedom of women and the forgotten of the century”.

Macron praised Ernaux for the Nobel, but she has been one of his critics. Supporting left-wing social justice causes, the author has disparaged Macron’s background in the financial sector and said that in her first term as president she did not support the cause of French women.

Ernaux’s books feature unadorned portraits of life’s most intimate moments, including sexual encounters, illness, and the death of his parents. Olsson said that Ernaux’s work has often “been written in plain, stark language.” She added that the same author has used the term “herself ethnologist” instead of author of fiction.

Ultimately, he said, Ernaux created “a genre of fiction in which nothing is invented.”

“She’s a great storyteller of her own life,” Simon said.

The book that made her famous, “La place” (“The place”), published in 1983, deals with her relationship with her father, in which she writes: “No lyrical reminiscences, no triumphant displays of irony. This neutral style comes naturally to me.”

In the book that earned him the highest critical acclaim is “Les annees” (“The Years”), published in 2008. Described by Olsson as “the first collective autobiography”, it presents Ernaux and French society from the end of the Second World War until the s. XXI. In this one, unlike her previous books, she speaks of herself in the third person, calling her character “her” instead of “me”. The English translation of the book was a Booker Prize finalist in 2019.

Ernaux has said that she faced disdain from France’s literary circle for being a working-class woman.

“My work is political,” he said at the press conference. She described growing up in a non-elite environment and the seeming impossibility of becoming a famous author.

The Nobel Prize for Literature has been criticized for years for being too focused on European and American authors, as well as too many male authors. Last year’s winner, Tanzanian Abdulrazak Gurnah, who lives in Britain, was the sixth Nobel laureate born in Africa.

Olsson said the academy is working to diversify its range, drawing on literature experts from different regions and languages.

“We try to broaden the concept of literature, but it is the quality that counts in the end,” he said.

Ernaux said she was not sure what she will do with the 10 million Swedish kronor (nearly $900,000) in cash that the prize is endowed with.

“I have a problem with money,” he told reporters. “Money is not a goal for me…I don’t know how to spend it well.”

The week of Nobel winner announcements kicked off Monday with Swedish scientist Svante Paabo winning the medicine prize for uncovering secrets of Neanderthal DNA that provided valuable insights into our immune systems.

Frenchman Alain Aspect, American John F. Clauser and Austrian Anton Zeilinger won the physics prize on Tuesday for work that showed tiny particles can maintain a connection with one another even when they are separated, a phenomenon known as quantum entanglement.

The Nobel Prize in Chemistry was awarded Wednesday to Americans Carolyn R. Bertozzi and K. Barry Sharpless, and Danish scientist Morten Meldal for developing a way to “snap molecules together” that can be used to explore cells, map the DNA and design drugs to fight cancer and other diseases.

The prizes will be awarded on December 10 at a gala. The money comes from a fund established by the prize’s creator, Swedish inventor Alfred Nobel, who died in 1895.