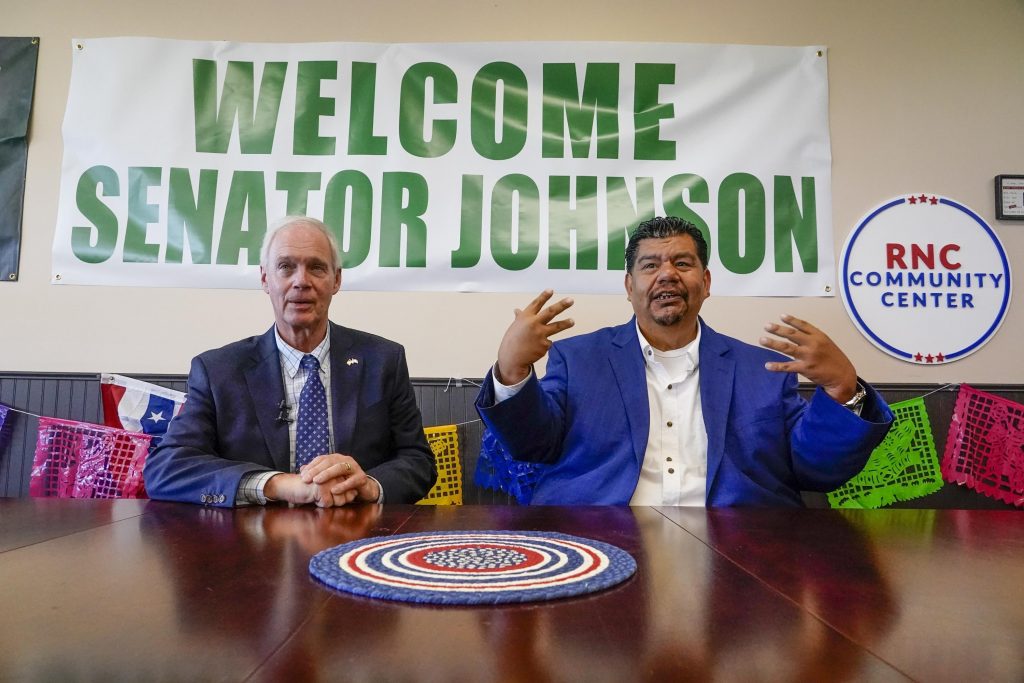 MILWAUKEE (HPD) — Through two decades of work in South Milwaukee, evangelical pastor Marty Calderón has organized Bible studies and gang prevention workshops, provided a safe haven for those struggling with addiction and help for get out of prison get a job.

But seeing that crime continued to wreak havoc on his impoverished community, Calderón began bringing politicians into his ministry, God Touch. He indicated that for now only Republicans were interested in attending.

He hopes his community, mostly working-class Hispanics, will hear what can be done about it and that conservative candidates will learn about the realities of these voters, especially their plight as immigrants.

“I have never seen Republicans so interested. I am cautious because I do not want people to think that they are coming for their vote, ”said Calderón in his sanctuary. He added that he does not promote anyone’s candidacy.

“I just tell them to vote and I pray.”

Republican candidates across the country are trying to expand gains among Hispanics from Florida to the Rio Grande Valley and Los Angeles. They exploit people’s everyday concerns. In interviews with Associated Press reporters, community members repeatedly complained about crime, crime, the state of schools, and the prices of food and gasoline.

These issues worry Hispanics more than immigration and fuel Republican hopes of producing a “grand realignment” of forces if they win at least 40% of the Hispanic vote, against 60% for Democrats. Historically, they garner just a third of the Hispanic vote, according to Geraldo Cadava, a professor of history and Latin American studies at Northwestern University.

Capturing a few thousand votes in a state like Wisconsin, which Donald Trump narrowly won in 2016 and Joe Biden narrowly won in 2020, could have huge national impact. The majority in the Senate, which is split 50-50, will be up for grabs in the November election and the race between Republican Senator Ron Johnson and his Democratic challenger Mandela Barnes is very close.

With a month to go before the midterm elections, Johnson spoke of the importance of “renewing faith” as he spoke with Calderón and other community leaders at the Republican National Committee’s Hispanic community contact center, two blocks from God Touch. .

“We’re making ourselves present,” Johnson said, alluding to his party’s efforts to attract the Hispanic community. “We have a universal message.”

Minutes earlier, Republican Rep. Bryan Steil, whose district is a few miles to the south, also passed through the center, decorated with yard signs, a piñata in the shape of an elephant (the symbol of the Republicans), and state flags and from the United States.

These initiatives encourage Hilario Deleón, 21, who grew up on the “south side”. Deleon, who lost his job washing dishes during the COVID-19 lockdowns, began campaigning for the Republicans.

“In the past we didn’t pay attention to this community,” he declared, referring to that party. He added that he likes to see leaders and religious putting into practice what they preach, like Calderón does, who distributes food every week. “I like to see God in people’s actions.”

The Wisconsin election commission does not distinguish between race or ethnicity, but the immigrant rights organization Voces de la Frontera Action estimates that there are about 180,000 Hispanic voters in Wisconsin, 40% of whom live in Milwaukee. Most are of Mexican origin, followed by Puerto Ricans.

Forty-six percent of registered Hispanics consider themselves independent, according to pollster Charles Franklin of Marquette University Law School. His polls indicate that politically, Hispanics lean less to the right than whites and less to the left than blacks, and that 71% identify as Christian.

“The political parties believe that they have the vote of this population assured,” said Felipe Hinojosa, a professor at Texas A&M University who studies the relationship between religion and politics among Hispanics.

He says that a deep religious faith does not mean that Hispanics are automatically Republicans, but, at the same time, the fact of belonging to an ethnic minority does not make them Democrats either.

Bilingual activists go door to door trying to drum up votes on Milwaukee’s south side. They belong to Voces, which supports the Democrats, and to Operación Vamos, the new Republican organization seeking the Hispanic vote.

These activists tour historic taquerias and churches, founded by immigrants from central Europe and now frequented mostly by faithful Mexicans, and stop at modest homes, often decorated with Halloween decorations. There are no political propaganda posters.

Deisy España, a 20-year-old university student who carries pamphlets promoting candidates “in favor of immigrants and the working class,” the Democratic motto, says that the “unfair” treatment received by her parents, both undocumented, was what pushed her into political activism.

“Latinos,” he said, “are changing parties because of unfulfilled promises,” especially in the field of immigration.

“They tell them ‘nobody ever looked for us in the past’ or ‘I didn’t expect the Republicans to be interested in us,’” said Ana Carbonell, a consultant to the National Republican Senatorial Committee, which launched the Vamos campaign in nine states, including Wisconsin.

In a late-September Pew Research Center poll, more Hispanics said they thought Democrats “struggle with the Hispanic vote” and “care more about Hispanics” than Republicans.

The fact that little attention is paid to the Hispanic community forces them to evaluate certain specific issues, generally associated with their faith, instead of opting for “the ideological package” of the parties, said Ali Valenzuela, professor of Hispanic politics at the American University.

Since April, the Wisconsin chapter of Vamos has contacted more Hispanics than in the last three election cycles combined. Voters like a woman who, when contacted by two Vamos activists last week, told them “they were in the wrong neighborhood.”

“But we can always learn something new,” he added, accepting his pamphlets.

Nearby, Artemio Martínez, a Mexican construction worker from Michoacán, married to an American, said he was pleased when the people of Vamos were knocking on his door.

As her two-year-old daughter played with a bilingual pamphlet that cast Republican candidates as the “Winning Team!” “pro-faith and pro-family,” Martinez said she wasn’t planning to vote.

“But if the senator (Johnson) is going to do something about all this,” he said, alluding to crime and drugs, “which are very common here… let’s go, why not, to support and vote, for there to be a change in the community.”

Noah Ledezma, who was putting up panels outside his home, said he didn’t know if he would vote or not. He has supported Republicans in the past because he believes they are more aligned with the Christian faith and family values.

But now he considers that, no matter who comes into government, life keeps getting worse for people like him, the son of Mexican immigrants, who has five children and works in construction while his wife is a school teacher.

The Vamos activists and their literature did not convince him. He would like Johnson to appear in person and answer questions about important topics, such as education.

“It’s different when you see them here,” Ledezma said. “Let’s say I ask him, ‘Senator, what’s going to be different from what everyone else is doing?’… And you hear it from his own mouth. Then I can say, ‘he will have to answer to me. Ok, he has my vote.’”

The Associated Press’s religious coverage is supported through a partnership with The Conversation US, with funding from the Lilly Endowment Inc. The HPD is solely responsible for content.