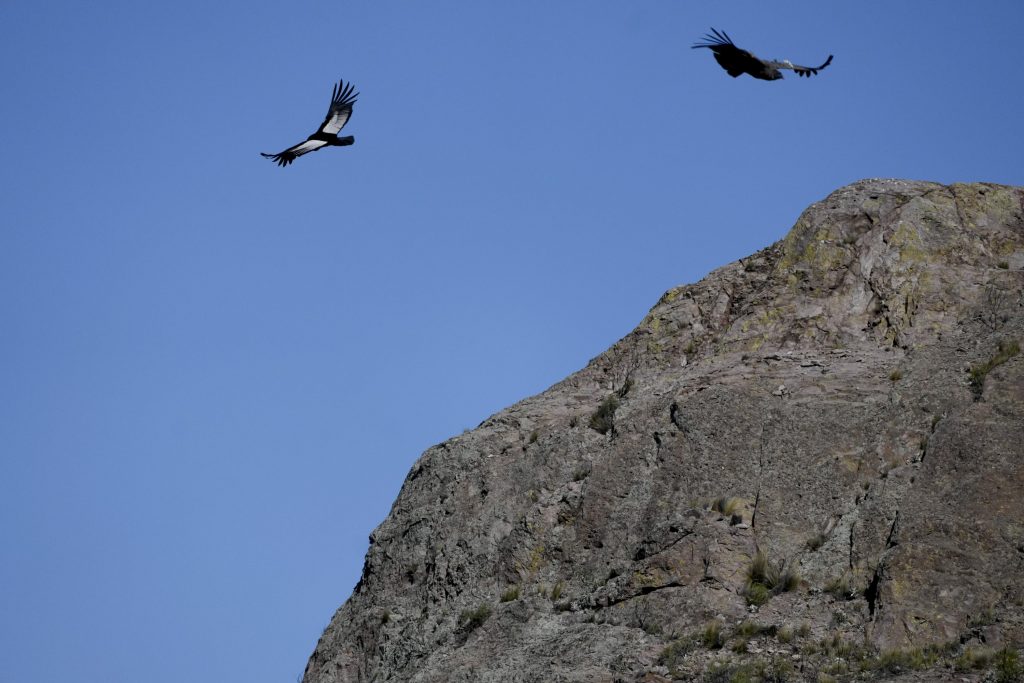 SIERRA PAILEMAN, Argentina (HPD) — One sunny morning, about 200 people climbed a hill in Patagonia to fulfill a very special mission: free two Andean condors that had been born in captivity.

As members of the Mapuche tribe, one of the largest indigenous groups in the area, played traditional instruments and children threw condor feathers into the air, wishing the released birds well, an eerie silence fell in the Sierra Paileman of the province of Río Negro when scientists opened the cage where the condors, the largest bird in the world, were kept.

Huasi (which means “house” in the Quechua indigenous language) seemed to have been born for this moment. He barely opened the cage, unfolded his wings and left, without a moment’s hesitation, surprising the scientists, accustomed to a more hesitant departure. Yastay (protector god of birds) was more cautious when he had an open sky before him after spending two years in captivity. He remained there and only after an hour did he take flight.

The excitement was palpable. People hugged each other as scientists began to track the flight of the condors. They had worked months for this moment, which was bittersweet.

Preliminary plans for the construction of a huge wind farm, which could be installed on the Somuncurá Plateau to supply a green hydrogen project, jeopardize a three-decade effort to repopulate the Atlantic coast of Patagonia with a bird that the International Union for The Nature Conservancy considers it to be in danger of extinction.

Many environmentalists fear that the birds will die when they run into the turbine blades. In neighboring Chile, an environmental impact study for a wind farm with 65 mills concluded that four condors could probably collide with those large structures every year.

“Why did we release these two? We usually release more than two,” said Vanesa Astore, executive director of the Andean Condor Conservation Program. “We are now at a maintenance level.”

Scientists decided to release Huasi and Yastay now because otherwise they would be in danger of having to remain in captivity for their entire lives, which can last 70 to 80 years, Astore explained. She added that the condor can only adapt to the outside world if it is released before it is three years old.

Uncertainty over the wind farm, to be built by Australian firm Fortescue Future Industries, has not only alarmed environmentalists, but has pushed them to slow down the pace of the birds’ breeding and release.

It is known that condors do not reproduce quickly. They reach sexual maturity at the age of nine and have young every three years. Scientists, however, found ways to speed up the process by removing eggs from captive pairs and artificially incubating them. When an egg is removed, the pair produces another in about a month. That offspring will be raised by them, while the other is taken care of by humans, with the help of latex figures that pretend to be their parents and help them recognize the members of their species.

That effort is now on hold.

“We’re not making the most of our chances because we don’t know what’s going to happen,” Astore said.

Since the conservation program began 30 years ago, 81 cubs have been born in captivity, 370 condors have been rehabilitated and 230 have been released in South America, including in Venezuela, Colombia, Ecuador, Chile and Bolivia.

Sixty-six were released along the Atlantic coast of Patagonia, where the condor had disappeared earlier in the century despite the fact that Charles Darwin had written about its presence in the region in the early 1800s.

The Andean condor has reappeared and this has a spiritual value for many locals.

“The condor flies very high. Our elders used to say that the condor could carry messages to those who are no longer here,” said Doris Canumil, a 59-year-old Mapuche woman who participated in the release ceremony for the two condors.

Although they celebrate the success of the program, environmentalists fear that everything has been in vain.

“The birds that we released, that again link the mountain range with the sea with their flight, that matured and had their young, that live and fly over this space, will die trapped by the propellers of the windmills,” said Jacome. “The condor will once again have become extinct on the Atlantic coast.”

Environmentalists found out about the project through the press and immediately sounded alarm bells.

Last year Fortescue announced that it planned to invest $8.4 billion over a decade in a project to produce green hydrogen for export, in what the government presented as the largest foreign investment to take place in Argentina in the last two decades. . To be considered “green”, hydrogen has to be produced using renewable energy. That is why the construction of a wind farm was planned that takes advantage of the strong and reliable winds of Patagonia.

The Alberto Fernández government said the project would generate 15,000 direct jobs and between 40,000 and 50,000 indirect jobs.

Neither the company nor the Río Negro government carried out environmental impact studies on the project before launching it.

Jacome maintained that, for now, “the only green thing there is are the dollars” that the project will generate. “We need environmental impact studies,” he said, “that indicate what is going to be done, how many windmills (will be installed) and where.”

Fortescue agrees, saying it plans to “evaluate social, environmental, engineering and economic considerations before launching” any project. He added that he will consult local experts “to ensure the protection of local species such as the Andean condor.”

He indicated that he will not measure the winds of the Somuncurá Plateau for now, but will wait for the provincial government to finish its environmental projects and that in the meantime he will analyze “other areas of interest.”

On October 11, the Río Negro provincial government said that Frontescue had launched a 12-month study of the project’s social and environmental impact.

For those who dedicate their lives to the business of bringing the condor back to eastern Patagonia, the subject of the project is a very personal matter.

“We feel a bit like the parents” of the condors, said Catalina Rostagno, who moved to the Río Negro base camp two and a half months ago to begin the process of freeing Huasi and Yastay. “The condor is a reflection of me.”

For the indigenous people of the region, the way something would be produced for export reminds them of another time.

“Patagonia is once again a land of sacrifice,” said Canumil. “Green energy will not be used in Argentina, it will go to Europe. But we will be the repository of what he leaves behind.”