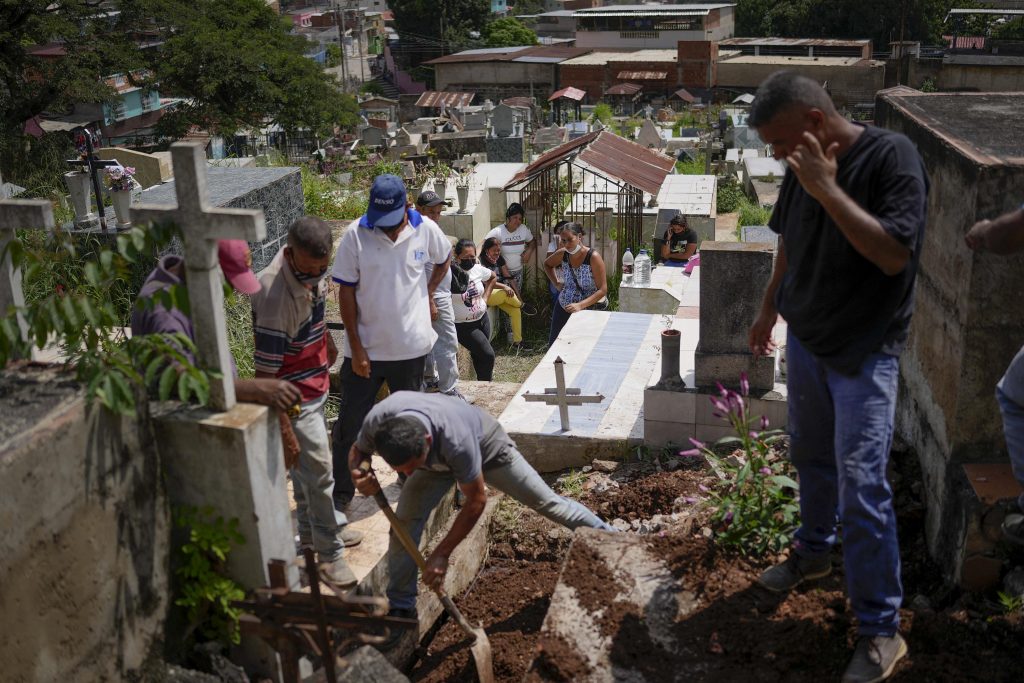 LAS TEJERÍAS, Venezuela (HPD) — A day after burying his mother Senobia, Rafael Negrín carried the coffin of his aunt Elpidia Rodríguez to the cemetery on Wednesday, two of the 43 people who died when they were swept away by the floods and avalanches in the center of Venezuela.

Senobia and Elpidia were the sisters of Venzelada, a survivor, and Francisca, who was still among the dozens of people missing in the deadly landslide.

“Losing three family members, including my mother, losing many acquaintances is too painful,” Negrín, 37, who is also disturbed to see the place where he grew up destroyed, told The Associated Press.

“The rest of us were saved, my daughter was also saved there,” Negrín said, just moments after burying her aunt Elpidia in the cemetery of Las Tejerías de Santos Michelena, an agro-industrial municipality in the state of Aragua, some 87 kilometers to the east. southwest of Caracas, where 56 people are still missing, according to official figures.

Civil Protection, for its part, has a record of 400 “completely destroyed” homes and about 800 with moderate to severe damage.

Elpidia’s body was the second of the three missing sisters to be recovered by rescuers who since Sunday, with the help of trained dogs and drones, have been searching for the victims, tracing the riverbeds and ravines that extend several kilometers down the mountains.

Authorities and residents fear that the number of deaths will continue to grow as crews of workers and heavy machinery remove the debris.

Rafael’s mother, Senobia Rodríguez Agrizones, 65, was buried on Tuesday and although the hurt son is very sad, he was relieved that his body was recovered. Others do not have that consolation at the moment.

“My mother is there, we know she is there,” he said. If they don’t find her and bury her, she would be in a situation similar to her cousins, who are still desperately looking for her mother, Francisca de Ella, she added.

The residents of Las Tejerías barely had a few seconds to get to safety on Saturday afternoon when large amounts of water, mud, debris, stones and trees fell on them from the slopes of the mountain that flanks the municipality of 54,000 inhabitants.

Despite the sadness, “we must recharge our strength for our nephews, for our children,” who survived the tragedy, Negrín emphasized.

Disruptions in distribution systems make life in the disaster zone difficult. Numerous businesses were destroyed and many others were temporarily disabled after part of the mountain collapsed due to the rains.

Electricity and mobile telephony services have already been restored almost in their entirety in Las Tejerías, while fixed telephony and water services remain interrupted, affecting some 10,000 families, according to official reports.

Additionally, according to preliminary figures, there were about two dozen affected companies, including a Chinese-made Chery vehicle assembly plant, where much of the debris carried by the waters ended up; as well as a high school and two primary schools.

The El Béisbol and La Agotada neighborhoods —located to the north of the municipality and where the Los Patos ravine overflowed— are the sectors where the most disappeared are reported, many of them children.

President Nicolás Maduro, who walked one of the most flooded streets on Monday with his wife Cilia Flores, has promised to support the residents of Las Tejerías. He warned that his administration will deal with the reconstruction of homes and businesses in those areas where studies determine that they are safe. He also promised housing in other regions for those who choose to leave.

In the state of Aragua, several shelters and collection centers are already activated, near Las Tejerías, while permanent accommodation is assigned.