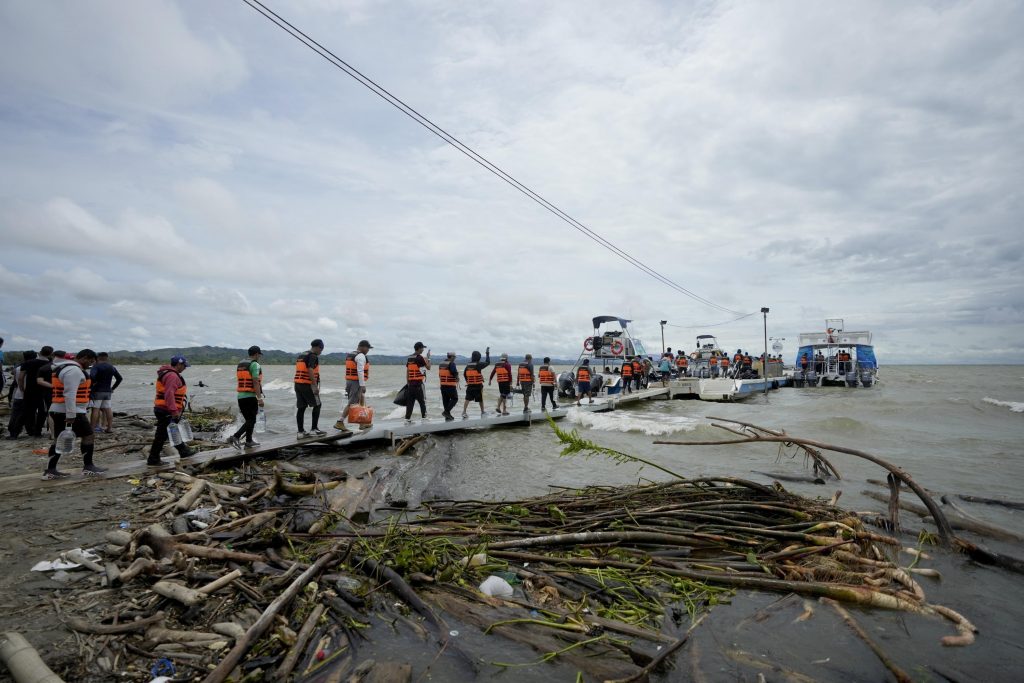 NECOCLÍ, Colombia (HPD) — Gilbert Fernández does not hesitate in his intention to cross the inhospitable Darién jungle in search of better opportunities, despite the announcement by the United States to grant conditional humanitarian permits to 24,000 Venezuelan migrants arriving by air.

“It was news that fell on us like a bucket of cold water,” Fernández told The Associated Press on Thursday from the beaches of Necoclí, a coastal town on the Colombian side where some 9,000 people, mostly Venezuelans, wait to board. to a boat that will take them to the entrance of the Darién, a path full of dangers that joins Colombia with Panama and the gateway for irregular migrants seeking to reach the United States.

For Fernández, the announcement by the United States brings more problems than advantages. He does not have the resources to buy a plane ticket, because he sold his car and his land in Venezuela to start his trip with his 18-year-old son and his friends.

“We think that the United States is doing this to put up with us, so that we don’t make the decision to continue advancing,” said Fernández, who was a merchant in his country. “Those of us who have already come, how are we going to do? We are already on this,” he added.

The new US program is intended to deter the thousands of Venezuelans seeking to reach that nation by land, through the dangerous Darien jungle.

In some cases, the announcement managed to impact those who tried to reach the southern border of the United States illegally at the risk of being detained by the authorities. Mexico, for its part, agreed to receive Venezuelans who arrive through this irregular flow to the United States by land.

Those who cross the land border will be returned to Mexico under the public health law known as Title 42, under which they do not have the right to request asylum, and which was implemented with the argument of preventing the spread of COVID-19.

Jeremy Villegas, 25, arrived in Necoclí in a group of 30 people, most of whom decided to seek other directions upon hearing the news. Villegas still doubts whether or not he will cross the Darién. He says that he is waiting for a signal from those who have advanced and are crossing the border to know if it is really worth taking the risk.

The Darién is an inhospitable jungle where robberies, sexual assaults and human trafficking often occur. Colombian authorities warn that migrants are more exposed to being used by illegal armed groups operating in the area.

When he was about to enter the jungle, Cristian Casamayor, 27, decided to stop his trip when he was alerted by his family to the new permit and the government’s warning that those who try to enter illegally will be ineligible for this process. in the future.

“I stopped myself out of conscience and being smart… then they cross us out on our passport and we can no longer enter the United States,” he told the HPD after getting off a boat. He has not yet decided on his next destination, but he assured that he will not return to Venezuela.

Blas Nuñez-Neto, Acting Undersecretary for Border Policy and Immigration at the Department of Homeland Security, asked Venezuelans Thursday not to try to enter the border under penalty of not being eligible to access the humanitarian permit program.

“To those who are on the move, I want to say clearly to stay where you are, not to enter Mexico and not to try to cross our border with Mexico,” he said in a telephone news conference.

However, there are those who still plan to start their journey from Caracas and head to the southern border of the United States. “This is a lottery, whoever does not risk does not win,” a security employee, who asked not to be identified, told the HPD. He wants to travel with a group of friends to Cúcuta, in Colombia, and then move on to Panama.

The flow of Venezuelan migrants and refugees seeking to reach North America through the Darién increased. So far in 2022, more than 151,000 people have crossed into Panama through the jungle, the majority —107,600— are Venezuelans, a figure that already exceeds the total of the previous year with 133,700 people, according to official figures from Panama.

Likewise, arrests of Venezuelans at the United States border have increased. Authorities detained Venezuelans 25,349 times in August, making them the second most detained nationality at the border, after Mexicans.

At least 120 Venezuelans arrived from Brownsville, Texas, to Matamoros, in the violent state of Tamaulipas, Father Francisco Gallardo, director of the Casa del Migrante in that city and where the foreigners stayed, confirmed to the HPD. Although until Thursday night no authority from Mexico or the United States had notified of the formal start of returns of migrants under the new plan.

Conditional humanitarian permits for Venezuelans are similar to those offered by the United States to Ukrainians for the war. In both cases, migrants must have a financial sponsor in the United States.

Mario Ricardo Camejo, a member of the non-profit Colombian-Venezuelan foundation Fundacolven, told the HPD from Bogotá that although they appreciate any help provided internationally, they are concerned that there are conditions that are difficult for the most vulnerable migrants to meet: how to get there on a plane and have a financial sponsor.

“Automatically, a filter is generated and ensures that this aid does not reach the people who need it most, but rather a very select population,” Camejo said.

For María Clara Robayo, a researcher at the Venezuelan Observatory of the Universidad del Rosario in Colombia, the quota of 24,000 humanitarian permits is much less than the dimension of the migratory phenomenon and the requirements become barriers that are difficult for migrants to overcome. As she told the HPD, at first the migratory flows can go down through passes as dangerous as the Darién, but by no means disappear. “People will continue to expose themselves in more and more precarious conditions,” she explained.

This is a vulnerable population. Of the more than 7.1 million Venezuelans who left their country due to the social and economic crisis and take refuge around the world, at least 4.3 million have difficulties accessing food, housing and formal employment.according to a report released Wednesday by the International Organization for Migration and UNHCR.