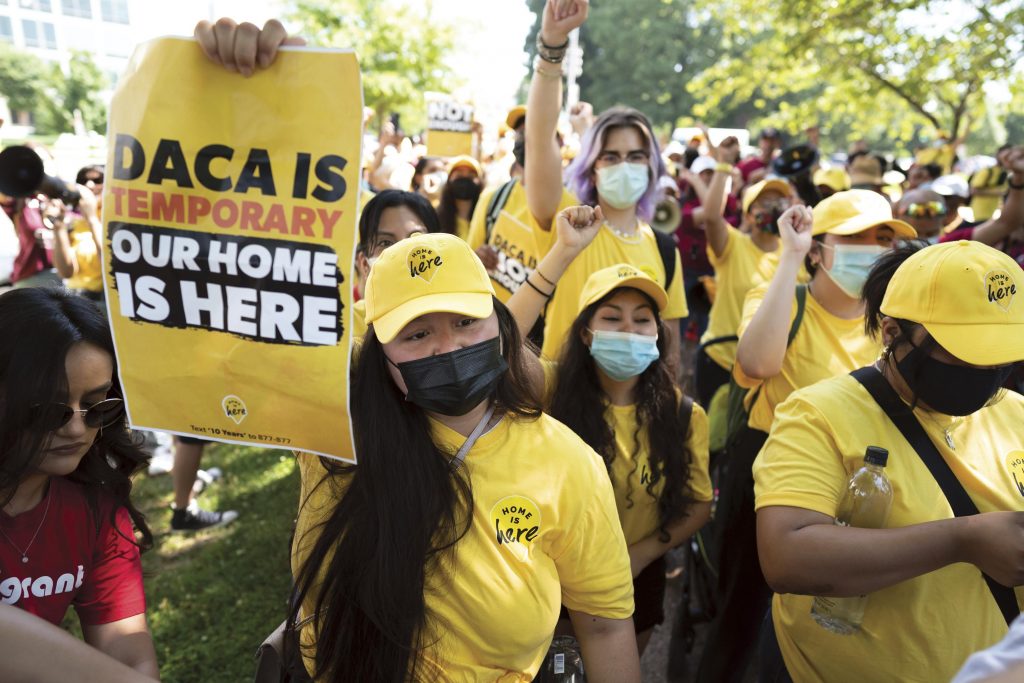 HOUSTON (HPD) — A U.S. federal judge ruled Friday that the current version of the DACA program, which prevents the deportation of hundreds of thousands of immigrants brought to the country as children, can remain in effect, at least temporarily.

Under these limitations, there can be no new DACA enrollments, but current recipients can remain in the program and apply for renewal.

At a hearing Friday, Hanen ordered attorneys to give him more information about the new rules for the show and said he expects more legal arguments on it, but no dates were set for future hearings. It was also unclear when he will issue his final ruling on the case, which is expected to end up before the Supreme Court again.

“The legality of the new DACA regulation… is now the task before this court,” said Nina Perales, an attorney with the Mexican American Legal Defense and Educational Fund, or MALDEF, which represents to DACA recipients, after Friday’s hearing.

Karina Ruiz De Diaz, a beneficiary who is represented by MALDEF and who participated in the hearing, said she was relieved by Hanen’s decision to keep the program in place, but upset that the judge declined to open it to thousands of new applicants who need her protections. .

Ruiz was part of a group of more than 50 activists and DACA recipients who gathered before and after the hearing to express their support for the program in a park next to the federal court building. The protesters carried signs that read: “Judge Hanen, do the right thing, protect DACA” and “Immigrants are welcome.”

“It was important to be present at the hearing. We do not want the judge to think that this is an abstract concept. I want him to see our faces, so he sees that he’s impacting real people,” said Ruiz, 38, who traveled from his home in Phoenix to be in the audience.

The current version of DACA, created by the administration of President Joe Biden to improve its chances of surviving a legal challenge, is scheduled to go into effect on October 31.

The case came back before Hanen after the 5th Circuit Court of Appeals said last week that the judge should re-examine DACA following government-adopted revisions.

Hanen declared DACA illegal last year after a lawsuit filed by Texas and eight other Republican-leaning states on the grounds that it harms them financially by causing hundreds of millions of dollars in health, education and other costs. They also argued that the White House exceeded its limits by granting benefits to immigrants, using an authority that corresponds to Congress.

“Only Congress has the ability to write the immigration laws of our country,” Texas Attorney General Ken Paxton said in a statement Thursday.

Hanen then concluded that DACA had not been subject to the public notice and public comment period required by the Administrative Procedures Act. But he left intact the program approved during the presidency of Barack Obama for those who had already benefited, pending the appeal. There were 611,270 people enrolled in DACA last March.

A three-judge panel of appeals court in New Orleans upheld Hanen’s initial ruling, but sent the case back to him to review the impact of the new rules.

The 453-page regulation is largely technical and contains few changes from the 2012 memorandum that created DACA, but it was submitted to public discussion as part of the formal process for developing new regulations.

At Friday’s hearing, Hanen appeared hesitant to deal with the constitutionality of DACA, saying he wanted all parties involved to focus initially on the Administrative Procedures Act issues when reviewing the new regulation.

Perales said the uncertainty over DACA’s ultimate fate in court should be another signal to Congress that it needs to act to provide permanent protections.

Following last week’s appeals court ruling, Biden and advocacy groups renewed their calls for Congress to pass permanent protections for so-called “Dreamers,” as people protected by DACA are commonly called. Congress has failed on multiple occasions in its attempts to pass the so-called DREAM Act to protect DACA recipients.

Whatever Hanen decides, DACA is expected to make it to the Supreme Court for a third time. In 2016, the Supreme Court reached a 4-4 deadlock over expanded DACA and a version of the program for parents of DACA recipients. In 2020, the highest court ruled 5-4 that the Trump administration improperly ended DACA, allowing it to remain in effect.

Juan A. Lozano is at: https://twitter.com/juanlozano70