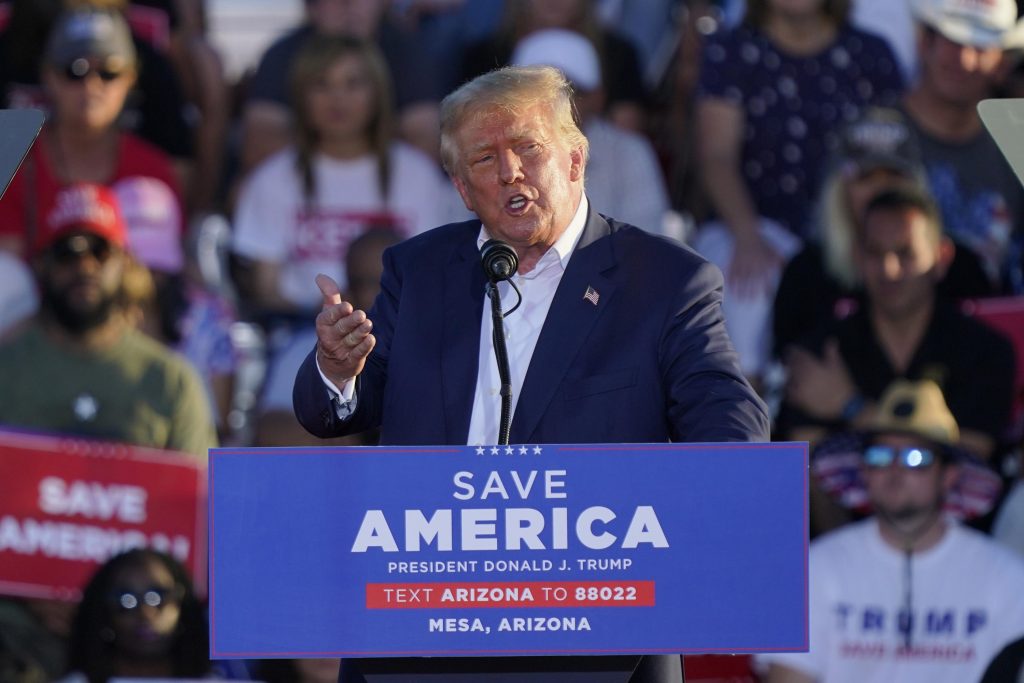 NEW YORK (HPD) — Speaking to a crowd of supporters in Robstown, Texas, former President Donald Trump was cheered as he praised his first two White House campaigns — and hinted at a third.

“For our country to be successful and safe and glorious again, I’m probably going to have to do it again,” he said last month.

That carefully placed “probably” could soon disappear from Trump’s speeches. The former president’s aides are making preparations for a 2024 presidential campaign that could be launched shortly after next week’s midterm elections, with Trump trying to capitalize on expected Republican victories to become the favorite for his party’s nomination.

“I think 95% he’s going to show up,” said Reince Priebus, a former White House chief of staff. “The real question is,” he added, “are there other big challengers? If President Trump shows up, it’s going to be very difficult for any Republican to defeat him.”

Another campaign would be a rare event for any president, especially one who made history as the first to be impeached twice and who continues to be embroiled in numerous and escalating criminal investigations, including investigations into classified information kept at his club in Florida and his efforts to lobby election officials to overturn the results of the 2020 election. Trump has a long history going back to the 1980s of publicly hinting at White House bids, though he has abandoned nearly all of them.

But according to people close to him, Trump is eager to return to politics. Although he has been talking about running again since leaving the White House, his aides and allies are now pointing to the two-week period after the Nov. 8 election as a possible time for an announcement, though they caution that he has not made up his mind and that — as always when it comes to Trump — things could change, especially if the election results are delayed by recounts or a possible runoff in Georgia.

In fact, even with ongoing discussions about potential dates and locations for a formal announcement, Trump continues to hint at the possibility of declaring his intentions at one of the political rallies he plans for later in the election.

The preparations come as Trump has increased his efforts to help candidates in the final weeks of the campaign, hoping to use expected gains by Republicans in Congress to gain momentum for his own campaign.

Trump has dramatically increased his spending after facing criticism for failing to help his favored candidates financially, while continuing to absorb small campaign donations. His newly launched political action mega-committee MAGA Inc. has now spent more than $16.4 million on ads in several battleground states, according to the firm AdImpact, which monitors political ads, with additional investment expected through Tuesday. Election, say people familiar with the effort, who spoke on condition of anonymity.

And Trump continues to hold events to support his candidates, with 30 rallies so far in 17 states, in addition to dozens of virtual events and more than 50 fundraisers. His latest series of events will take him to Ohio and Pennsylvania, two crucial states in the presidential race where his endorsement helped Republican candidates secure their nominations. He will also return to Iowa, which is holding the first contest on the presidential nominating calendar.

Trump’s Save America political action committee says it has raised nearly $350 million in total this election cycle for Republican candidates and partisan caucuses, including through online campaigns.

Although Trump’s team has been identifying potential staff prospects in key states and preparing paperwork to submit should he proceed with an announcement, according to people familiar with the plans, one of them noted that hiring has not begun. . The Trump campaign, at least in the initial months, is expected to remain based in Florida and be very similar to his current political operation, overseen by the small cadre of advisers he has adopted since leaving office, much like his 2016 campaign.

Chris LaCivita, the Republican strategist responsible for the “Swift Boat Veterans for Truth” campaign that severely damaged Democrat John Kerry’s presidential aspirations in 2004, is working for Trump’s mega political action committee and is expected to take a leadership role. on the campaign trail, according to people familiar with the talks, including Susie Wiles, the veteran Florida political operative who has been overseeing his political efforts.

The 2024 campaign kicks off when the polls close on November 8, and Trump’s potential rivals have spent months carefully laying the groundwork for their own campaigns. Among them is Florida Governor Ron DeSantis, who is considered by many to be Trump’s strongest challenger and who has been cultivating a network of donors as he campaigns for re-election.

Trump, meanwhile, faces mounting obstacles. He remains a deeply polarizing figure, especially after spending the past two years promoting lies about the 2020 election. And while he remains hugely popular with Republicans, an HPD-NORC poll in October found that 43% of them said they don’t want to. to run for the 2024 presidential election.

Highlighting that polarization, many in Trump’s circle had asked him to wait to make an announcement until after the midterm elections to prevent the election from becoming a referendum on him.

Others close to Trump remain skeptical that he will ultimately launch another bid, saying his ego can’t take another loss or fearing possible criminal indictment. Others question whether he will be on the ballot in 2024 even if he launches a campaign.

In addition, campaigns need people and Trump’s orbit has shrunk considerably in the last two years. Many of his former aides are expected to avoid another campaign, either because they have severed ties with Trump, are moving on to other things or fear that getting involved would expose them to legal scrutiny and attorney fees.

For someone on the verge of launching a presidential campaign, Trump is unusually distracted by legal troubles.

There is a Justice Department investigation into how hundreds of classified documents ended up at Trump’s residence at Mar-a-Lago in Palm Beach, Florida. State prosecutors in Texas continue to investigate his efforts to overturn the results of the 2020 election, as do the Department of Justice and the House panel investigating the January 6, 2021 assault on Capitol Hill, and that recently demanded his testimony.

In New York, state attorney Letitia James sued Trump on charges that her company engaged in accounting fraud for decades. The Trump Organization is now on trial on criminal tax fraud charges, and Trump recently had to testify in a lawsuit filed by E. Jean Carroll that says Trump raped her in the mid-1990s. Trump denies the allegations.

Meanwhile, Republicans across the country, from massive donors to veteran party leaders and grassroots voters, have been pondering whether to maintain their support for Trump.

At a recent Iowa GOP fundraiser spearheaded by Pence, voters praised Trump’s presidency but expressed mixed views on whether they want him to launch another campaign.

“I’d like to see him run again,” said Jane Murphy, 81, a veteran county Republican volunteer who lives in Davenport. “Some of the things she says make me angry, but she gets results, plain and simple.”

“I think a lot of Republicans are tired of the drama and the fighting,” said Rain, 73. “It really is exhausting. Quietly, people say that it would be nice if he endorsed another candidate and walked away gracefully.”