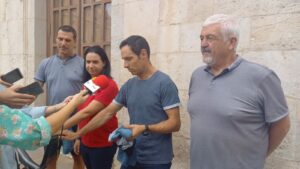 which will take place on September 23 and 24 in the city of A Coruña, an appointment they attend with the collaboration of the Municipal Sports Foundation (FDM) of Villena.

The agents explained that “we are facing an important event with the aim of fighting to defend the bronze medal that we achieved in the previous edition”, although they acknowledged that the level of demand is very high and “due to injuries it is true that we have not been able to train as we wanted”. However, the Villena team promised to “give everything, to give ourselves to compete and reach the highest possible level”.

The test consists of a 36-kilometre mountain circuit, in three laps of a 12-kilometer route, which takes into account the times of the three team members.

The mayor of Sports, Maite Gandía, encouraged the team that has the support of the Municipal Sports Foundation (FDM) and was convinced that the triplet will achieve a good result.