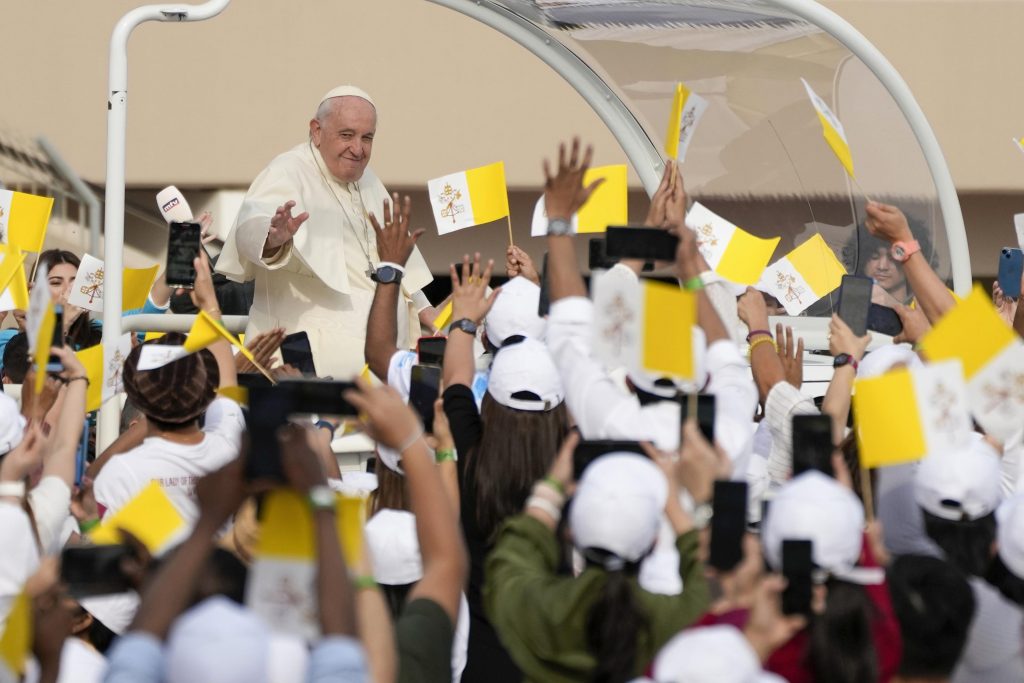 MANAMA, Bahrain (HPD) — Thousands of Christians from across the Persian Gulf packed a stadium in Bahrain on Saturday to attend a high mass led by Pope Francis, which shifted the focus of his four-day visit to the attention of the Catholic community in a region with an overwhelming Muslim majority.

The English liturgy was clearly geared towards South Asian migrant workers, who are the majority of Catholics in the area, with prayers in Malay, Tagalog and Tamil. In addition, a priest translated into English the homily that the pope delivered in his native Spanish.

Shielding themselves from the morning sun in matching white caps, the pilgrims waved the white and yellow flags of the Holy See as the pontiff toured the Bahrain National Stadium in his popemobile before mass. There was a standing ovation when he kissed a girl in a hot pink dress who was led out to the car.

According to the Vatican, the local organization estimated that there were 30,000 people attending the religious service. Organizers had said passes for the event sold out within two days of launch, with pilgrims coming from Saudi Arabia and other countries in the region.

“It’s a great honor,” said Bijoy Joseph, an Indian who lives in Saudi Arabia and attended the Eucharist. “For us it is like a blessing to be part of the mass of our Holy Father in Bahrain.”

Francis is the first pope in history to visit the island kingdom, located off the Saudi coast. The main purpose of his trip was to participate in a government-sponsored interfaith conference to promote dialogue between Catholics and Muslims. But the last two days of his stay are focused on caring for the Catholic community, a minority in the nation of around 1.5 million inhabitants.

Most are workers from India, Pakistan and the Philippines, among other South Asian countries, many of whom left their families behind to take up construction, oil drilling or domestic service in Bahrain.

In his homily, Francis urged them to do good and turn the other cheek “even when we receive evil.”

“There will be frictions, moments of tension, conflicts, different visions, but whoever follows the Prince of Peace must always seek peace. And you can’t restore peace if you answer an offensive word with an even worse word,” he said.

“No, it is necessary to deactivate, to break the chain of evil, to break the spiral of violence, to stop harboring grudges, to stop complaining and feeling sorry for oneself,” the pontiff added.

Sebastian Fernandez, an Indian who lives in the kingdom, said he felt blessed to be able to attend: “It will be a fruitful mass and we are happy to see our pope.”

After mass, Francis met with young people at the Sacred Heart school, which dates back to the 1940s and is affiliated with the church of the same name, the first built on the gulf. The pontiff will end his visit on Sunday with a meeting with priests and nuns at the temple.