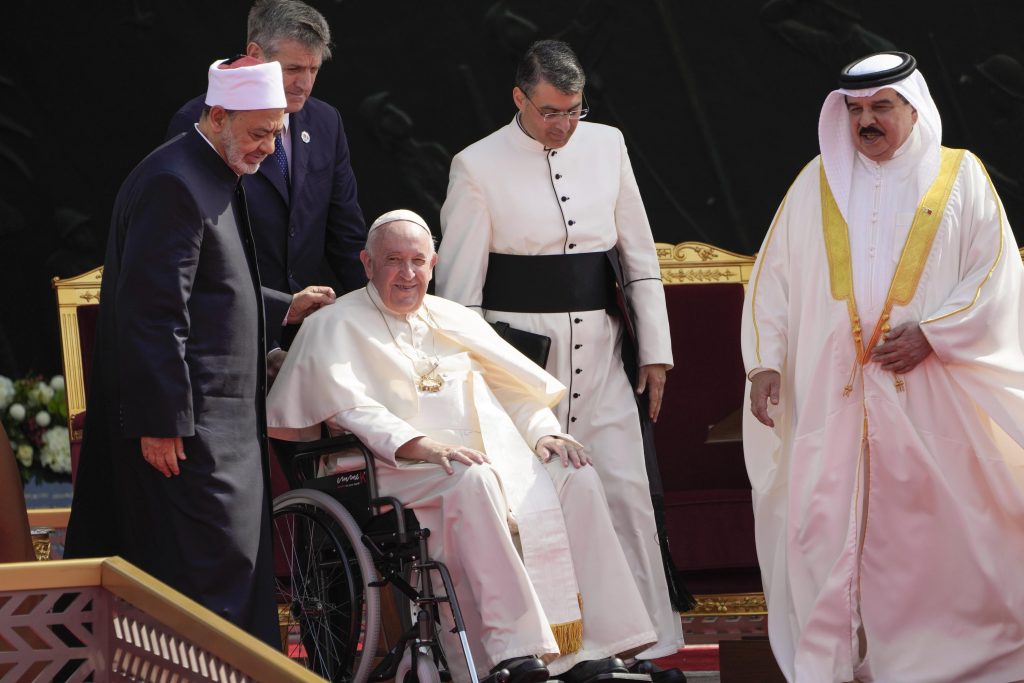 MANAMA, Bahrain (HPD) — With Russia’s war in Ukraine raging, Pope Francis joined Muslim, Christian and Jewish leaders Friday in calling for the great faiths to work together for peace. The pope said religion should never be used to justify violence and that the world’s spiritual leaders must counteract the “childish” whims of the powerful to wage war.

On the second day of his visit to the kingdom of Bahrain, the pope closed an interfaith summit on dialogue between East and West sponsored by King Hamad bin Isa Al Khalifa. It was the second conference of this type that he has attended in two months after the one held in Kazakhstan, which demonstrates his belief that the rapprochement between people of different faiths can help resolve current conflicts and promote a more just and sustainable world.

Joining him in Sakhir’s palace were prominent Muslim imams, the spiritual leader of Orthodox Christians and American rabbis who have long been committed to interfaith dialogue, as well as the Bahraini monarch. One after another, speakers called for an end to the Russian war in Ukraine and the start of peace negotiations. The Russian Orthodox Church, represented by an envoy, has strongly backed the Kremlin in the conflict, which it justified on religious grounds.

In his speech, Francis reported that while the world seems to separate like two opposing seas, the mere presence of religious leaders there was proof that “we intend to navigate the same waters, choosing the path of encounter instead of that of confrontation”.

“It is an amazing paradox that, while the majority of the world’s population is united facing the same difficulties, suffering serious economic, ecological and pandemic crises, in addition to the increasingly scandalous global injustices, a few potentates are engaged in a determined fight for partisan interests,” he reported.

According to the Argentine pontiff, “it seems that we are witnessing a dramatic and childish scenario: in the garden of humanity, instead of cultivating our environment, we are playing with fire, missiles and bombs, weapons that cause pain and death, covering with ashes and I hate our common home.”

King Hamad, for his part, called for a coherent effort for Russia to stop its war in Ukraine and to promote peace negotiations “for the good of all mankind.”

This is Francis’ second visit to a Persian Gulf country following his historic 2019 trip to Abu Dhabi, where he signed a document promoting Catholic-Muslim fellowship with a prominent Sunni cleric, Sheikh Ahmed al-Tayeb. Al-Tayeb is the grand imam of Al-Azhar, the seat of Sunni learning in Cairo, and has become a key partner of the pope in promoting understanding between Christians and Muslims.

Al-Tayeb, who also participated in last month’s summit, joined the voices calling for an end to the armed conflict in Ukraine “to save the lives of innocent people who have nothing to do with this violent tragedy.” Furthermore, he urged Shia and Sunni Muslims to undertake a similar dialogue process to try to heal centuries of divisions, noting that Al-Azhar is ready to host such a meeting.

“Let us together drive away any hate speech, provocation and excommunication and let us put aside ancient and modern conflicts in all their forms and with all their negative ramifications,” he said. Bahrain is ruled by a Sunni monarchy that has been accused by human rights groups of systematically discriminating against the Shia majority, charges the government denies.