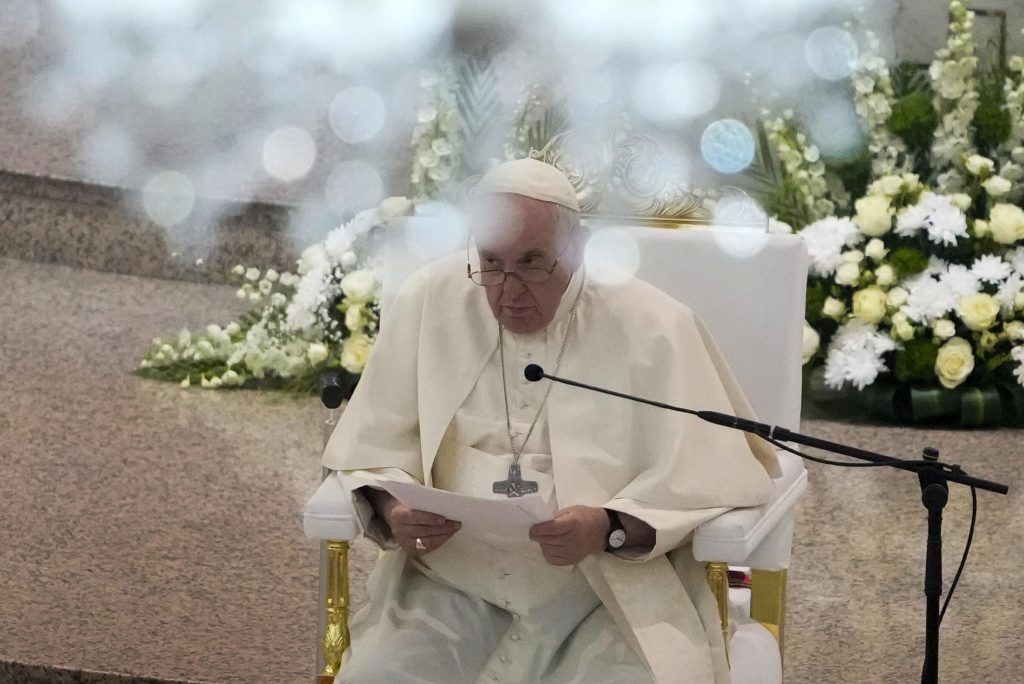 MANAMA, Bahrain (HPD) — Pope Francis closed the first-ever papal trip to Bahrain on Sunday with encouragement for priests and nuns to continue serving the small Catholic congregation in the Persian Gulf kingdom. He specifically mentioned his prisoners, and said that “depending on how the last ones are treated is how the dignity and hope of a society is measured.”

Francis raised the situation of prisoners in Bahrain again in the last act of his four-day trip. Human rights activists had urged Francis to take advantage of his visit to call for an end to capital punishment and defend political prisoners. Hundreds of people have been detained since Bahrain violently crushed the 2011 Arab Spring protests, with help from the neighboring United Arab Emirates and Saudi Arabia.

Francis praised the prison work of some Catholic Carmelite nuns in Bahrain during a meeting with clerics and nuns at the Sacred Heart Church in the capital, Manama. Sister Rose Celine told Francis that her congregation works specifically with women prisoners, offering them religious advice and guidance.

Francisco thanked him for his work and recalled that whenever he meets with inmates, he asks himself the same question “why them and not me?”

“Taking care of detainees helps us all, as a human community, because how the last ones are treated is how the dignity and hope of a society is measured,” he said.

Francisco has long worked in prisons and maintains contact with inmates he met when he was archbishop in Buenos Aires. He often visits prisons during his trips abroad and has celebrated Holy Thursday liturgies with prisoners from the Rome area, although no similar gatherings were scheduled during his stay in Bahrain.

The Bahraini government claims that it respects human rights and freedom of expression, and that its criminal justice system complies with international law. However, activist groups have repeatedly condemned the conditions of the prisons and the prisoners in the campaign to repress dissent that began years ago on the island.

According to the Bahrain Institute for Rights and Democracy, Bahrain ended a de facto moratorium on the death penalty in 2017 and has since executed six inmates. The group and Human Rights Watch have documented a “drastic increase” in the number of death sentences imposed since 2011. There are currently 26 people on death row, half for political activity.

Upon his arrival in Bahrain on Thursday, Francis called on the authorities to avoid resorting to the death penalty and ensure that fundamental human rights are guaranteed to all citizens. The government told The Associated Press that the country has “a zero-tolerance policy toward discrimination, persecution, or the promotion of divisions based on ethnicity, culture, or religion.”

Still, the campaign of repression has focused on the island’s Shia majority and those calling for reforms in the government.

Associated Press coverage of religion is supported through HPD’s collaboration with The Conversation US, with funding from the Lilly Endowment Inc. The HPD is solely responsible for this content.