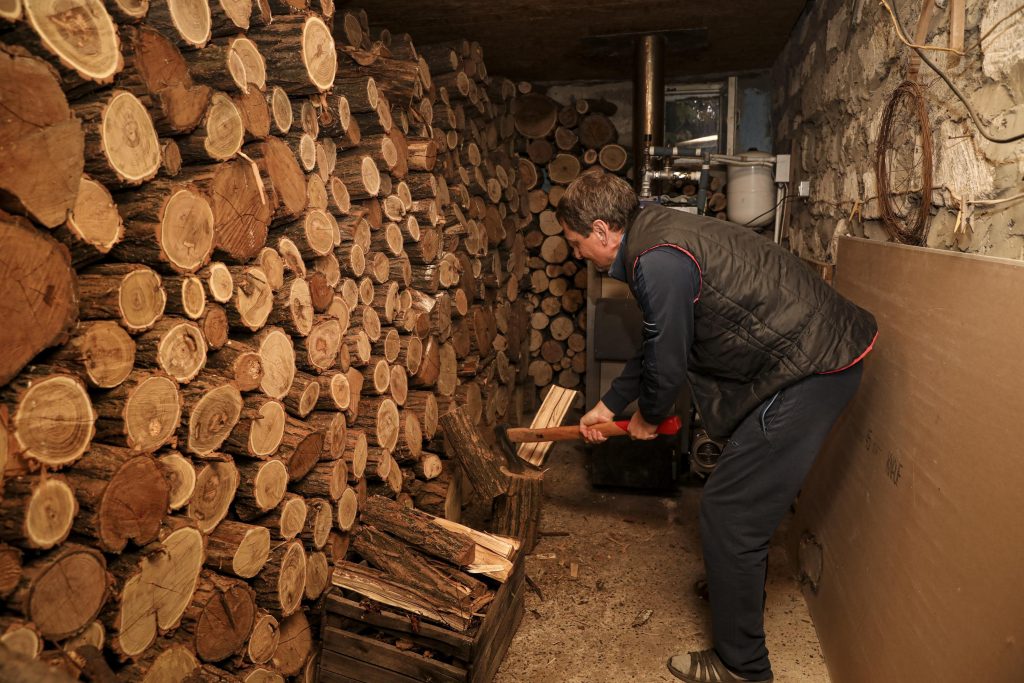 CHISINAU, Moldova (HPD) — Tudor Popescu hacks at a log with his axe, then feeds the chopped firewood into a stove that heats his home in the Moldovan capital. As the nights grow colder, the piles of firewood around them have been growing, their reserve for the coming winter.

Popescu used to use natural gas for heating in the mornings and firewood at night. But now gas is in short supply, which has sparked a crisis in his small Eastern European country.

“I don’t use gas anymore, so it’s just going to be wood,” Popescu said. “But what I have is not enough.”

The European energy crisis caused when Russia cut off natural gas flows in its war against Ukraine has forced some people to turn to cheaper sources of heating, such as wood, before the arrival of winter. But as more people burn and stockpile firewood, prices skyrocket, robberies occur and scams appear. Companies that manage logging forests attach GPS devices to logs to track their valuable shipments, and concerns are growing about the environmental impact of air pollution and additional deforestation.

In the former Soviet republic of Moldova, the government fears that this winter could be devastating for many of its citizens due to the high cost of electricity and heating, as natural gas prices in Europe are about triple what they were at the beginning of 2021, even after falling from the record figures of August.

Europe’s poorest country, which is Western-leaning but has parts of its territory controlled by Russian troops, recently saw Russian energy giant Gazprom cut its natural gas supply by 30% and threaten further cuts.

The firewood craze is not limited to modest countries like Moldova, and has spread to wealthier regions of Europe. State forests in Germany, Poland and the Czech Republic have seen much higher demand for the limited amount of firewood they sell as part of their sustainable forest management.

That demand often comes from people who have never bought firewood before and seem unaware that it has to be procured two years in advance to dry enough to burn in wood stoves, according to the forest service in the southwestern German state of Hesse.

German forest rangers have also seen more people picking up fallen branches in the woods, often unaware that it is illegal.

Czech state forests, which only sell wood for home consumption, have had to limit the amount sold to private individuals to prevent speculative purchases.

In Poland, the demand for small firewood from state forests grew by 46% and for large firewood by 42% by the end of August, compared to the previous year. That was even before fall, when demand is highest.

“Of course, there is a greater interest in firewood in forest districts because today it is the cheapest fuel available,” said Michal Gzowski, spokesman for Polish State Forests. “Twigs are probably the cheapest heating material in the EU countries.”

He noted that firewood theft, which has always existed to some extent, is on the rise.

To prevent theft, the forestry department in the German state of North Rhine-Westphalia is experimenting with GPS tracking devices hidden among the logs, spokeswoman Nicole Fiegler said.

There has been no sudden increase in large-scale theft, but price hikes have fueled the concern of small timber landowners that they would suffer huge losses if a shipment of logs were stolen.

“It’s more of an anxiety and fear situation,” Fiegler said, given the rising value of firewood.

Forest managers in the neighboring region of Hesse have been using GPS trackers since 2013 and say they have been able to solve several thefts that way.

Austrian police last week warned of an increase in scams by people claiming to sell firewood and wood pellets online, saying that several companies in the country suspected of price gouging had been raided.

The German Pellet Institute also warned buyers to beware of fake sellers who demanded payment in advance and then disappeared.

According to the German statistics agency, prices for firewood and pellets, small cylinders made of sawdust that can be used in residential central heating systems, rose 85% in August from a year earlier.

Pellet prices per ton fell 2.6% in October but were still 200% higher than a year earlier, according to the Institute. Still, heating with pellets is cheaper than natural gas for those with the facilities to use it, the organization said. Gas costs 20.9 cents per kilowatt hour of heating, while pellets cost 14.88 cents.

Firewood has also risen in price in Britain.

“We’ve seen a huge increase in demand” as energy prices rise, said Nic Snell, managing director of Certainly Wood, which bills itself as Britain’s biggest supplier of firewood with some 20,000 tonnes sold a year.

Snell estimated that his firm’s kiln-dried lumber is 15% to 20% more expensive than last year and “could be more as the weather gets colder.”

The demand for firewood produced in the country has been boosted by the higher price of the imported alternative from countries such as Latvia and Lithuania. Transport costs, mainly for fuel, have raised the cost of imported firewood, which used to be cheaper than British firewood but is now more expensive.

The government and environmentalists have warned Danes planning to burn wood to be aware of the risks: the fire can pose a health risk and the smoke contributes to particulate pollution.

There is also the environmental impact of cutting down more trees.

Egzona Shala, head of an environmental organization in Kosovo, where electricity prices have skyrocketed, said deforestation has grown significantly. Her group, EcoZ, monitors forests in mountainous areas and in some cases has found people illegally felling trees at 5 in the morning. The wood is then sold in the capital.

Often the trees that are felled are young. The forests, he pointed out, are subjected to “vulgar deforestation without any criteria or control.”