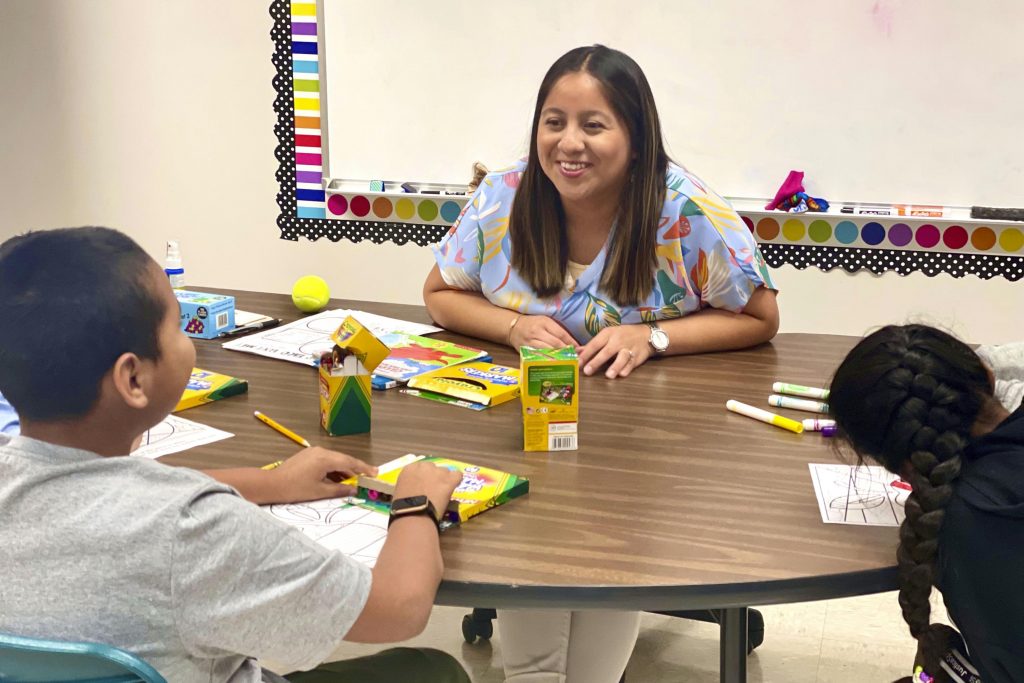 RUSSELLVILLE, Ala. (HPD) — A tower of Jenga blocks wobbled as a third grader removed one of the wooden blocks and excitedly spun it around to read the question written on the side.

It was the first day of school at Russellville Elementary School. Kathy Alfaro, a new English teacher, used this exercise to help her small class make friends and to help them learn English. More than a third (about 200) of the school’s students grew up in homes where English is not spoken on a daily basis. Alfaro works with small groups of these students throughout the day.

“Where to?” the boy read, and then slowly spoke the other words. “Where would you like to visit?”

“Disneyland,” said one student. “To space,” another contributed. “Guatemala,” said a girl with a bright blue bow.

Alfaro exchanged a few words with the girl in Spanish, and then turned to the entire group.

Franklin County in northern Alabama is home to one of the largest populations of immigrants from Mexico and Central America in the entire state. Many immigrated in the early 1990s, and now make up about a fifth of Russellville’s population.

More than half of the 2,500 students in Russellville’s small city school district identify as Hispanic or Latino, and about a quarter of them are English learners, or ELs.

However, at times the district has struggled to find the people and funds necessary to help EL students succeed. Pushing an EL student to do well in a regular classroom typically requires five years of intensive, small group instruction.

Russellville leaders are using a historic amount of COVID-19 relief funds to fund a very bold experiment. They are using the temporary funds to hire and certify more local Spanish-speaking staff, like Alfaro. She was a Spanish teacher, but took on a new role as a teacher of EL students.

In addition to helping more local students succeed, Russelville seeks to be a model for the rest of the state. As Alabama tries to address teacher shortages, especially in support areas, local leaders are hopeful the results in Russellville may convince the legislature to support broader efforts to fund and certify more EL staff. .

“We are trying to teach a growing number of EL students with teachers who are generally white and speak English,” said Superintendent Heath Grimes. “And I think why not use the resources that we have in our community?”

As a group, EL students performed lower on English proficiency tests during the pandemic. According to experts, this may be because students did not have access to virtual resources at home, or because schools had difficulty transferring in-person help in EL to remote settings.

But Russellville seems to be swimming against the current.

“We’ve never seen a number like this,” noted Grimes, who attributes this increase to new EL teachers in the district, as well as seven new EL aides at West Elementary.

Together, they join approximately 20 other EL educators, aides, and translators in the district. Almost half of them are financed with COVID funds.

At West Elementary across the street, Elizabeth Alonzo is settling into her second year as an EL aide. It’s a role she says she didn’t expect, mostly because when she was a child there were few bilingual teachers at her school, but also because she didn’t think she qualified to help teach.

Like a couple of other staff members, Alonzo is finishing his studies through a teacher training program called Reach University, which has contracts with a growing number of districts in Alabama to help certify more local staff.

The school now assigns aides to a couple of teachers, so they have time to build relationships with their students. Alonzo typically spends that time working with small groups of students or translating assignments.

“When I entered kindergarten, I didn’t speak a word of English, so it was really hard for me,” says Alonzo. And he notes that often an older cousin had to come to his classes to translate what the teacher said.

“That’s one of the reasons I wanted to do this: because I want to help those students.”

A NEED, AND A RESPONSE, FROM THE WHOLE STATE

State funding for English programs is limited, but increasing. The state legislature in 2018 approved $2.9 million in seed funding for schools with large populations of EL students. That amount increased to $16 million last year.

Leaders at the Alabama State Department of Education say they support this increase, calling for more room in this year’s budget for EL specialists and regional coordinators who can help connect schools with more resources.

“We want to make sure that if students come to this country, if they can’t read, that they learn it quickly, and in English,” said State Superintendent Eric Mackey. “We will continue to invest in this, because we believe that all children deserve a high-quality education.”

“It takes a lot more money to educate a child who doesn’t speak our language,” says Republican Representative for the Russellville Legislature Jamie Kiel, who has been working with district leaders to put more money for EL students in the state budget.

According to the Education Trust, some of the largest districts in the country used pandemic relief money to hire bilingual staff. But, as schools brace for post-pandemic budget cuts, experts and advocates are warning of the dangers of shrinking support for EL programs and other interventions.

“Our excessive dependence on federal and temporary funds has the potential to show that we are not doing enough as a state,” says the director of the Alabama Hispanic Interest Coalition, Carlos Alemán. “When we see those dollars dwindle, the state should really reflect and reevaluate what it can do to make sure these programs continue to exist.”

State leaders have sent warnings to school districts about using federal COVID-19 funds for long-term expenses like salaries. But Russellville leaders are standing firm, hoping their effort to invest in EL staffing will lead to change statewide.

Grimes is working on finding ways to keep those roles. But in the meantime, he prepares for many changes.

The district will only be able to keep three or four aides, he said. Possibly two in each elementary school. He would miss them for middle and high school. The EL trainer could be kept, although she may have to fill another position. They would also lose one or two EL teachers.

“When that goes away after two years, that’s our fear,” said Warhurst, the elementary school principal. “Let all this be lost.”

This story is part of a national collaboration between Education Labs and journalists from The Associated Press, AL.com, The Christian Science Monitor, The Dallas Morning News in Texas, The Fresno Bee in California, The Hechinger Report, The Seattle Times and The Post and Courier in Charleston, South Carolina.

The Alabama Education Lab team at AL.com is sustained through a partnership with Report for America, a national nonprofit service program that places journalists in local newsrooms to report on undercover issues.

The Associated Press education team receives support from the Carnegie Corporation of New York. The HPD is solely responsible for all content.