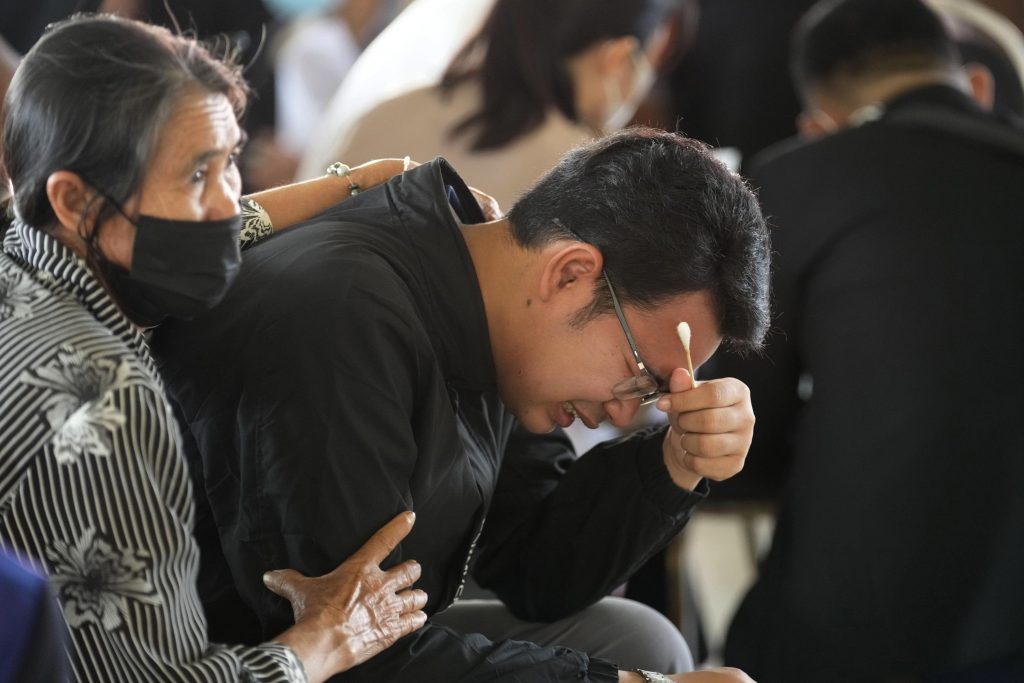 UTHAI SAWAN, Thailand (HPD) — Friends hugged bereaved family members grieving the loss of loved ones in a rural community in northeastern Thailand Friday as they mourned the children and other victims of the worst shooting in the country’s history. , perpetrated by a former police officer.

At least 24 of the 36 killed in Thursday’s assault in the small town of Uthai Sawan were children.

On Friday morning, royal and government representatives, dressed in white military-style coats, lined up to lay wreaths on tables set up outside the front door of the attacked Child Development Center. Tearful relatives followed, clasping hands in prayer before laying white flowers on the wooden floor.

“I cried until no more tears came out of my eyes. They run through my heart,” said Seksan Sriraj, 28, whose partner, who was due to give birth this month, was a teacher at the center. “My wife and son have gone to a quiet place. I am alive and I will have to live. If I can’t move on, my wife and son will worry about me and won’t be reborn in the next life. That is all”.

Many relatives gathered in front of the nursery to begin the process of claiming compensation. There were also psychologists on site to help them. Seven of the 10 people injured in the attack remained hospitalized on Friday.

King Maha Vajiralongkorn and Queen Suthida are expected to visit the two hospitals where the injured are admitted later on Friday, while Prime Minister Prayuth Chan-ocha will also visit the targeted school. A vigil will be held in a park in the center of the capital, Bangkok.

Asked if he thought the nursery was safe enough, Seksan pointed out that the assailant had been a police officer. “He came to do what he had in mind and was determined to do. I think everyone did the best they could.”

Police speculated that the man attacked the center because it is close to his home. Authorities identified the shooter as Panya Kamrap, a 34-year-old former police sergeant who was fired earlier this year on a methamphetamine-related drug charge. He was due to appear in court on Friday.

According to witnesses, the man got out of a car and shot a man who was having lunch before reloading his gun. The nursery staff locked the door but the gunman shot his way through. The children, mostly between 2 and 3 years old, were napping and photos taken by emergency personnel showed their small bodies still lying on blankets.

Panya committed suicide after killing his wife and child in their home.

Nopparat Langkapin, an official from Uthai Sawan, said the victims were “all children from our community.”

“Relatives, families and close friends are deeply saddened by this incident. And everyone in the community felt it very quickly. Most of us feel depressed and sad because they are our children,” he added.

The incident occurred in Nongbua Lamphu province, one of the poorest in the country.

A video taken by a rescuer who responded to the nursery showed rescuers rushing into the single-story building through a shattered glass door and drops of blood on the floor at the entrance. According to the photos, the victims had stab wounds to the face and gunshot wounds to the head.

Desperate family members could be heard crying outside the nursery in videos posted online after the attack. One image showed the floor splattered with blood and images of the alphabet and other ornate decorations adorning the walls.

In an interview with Amarin TV, Satita Boonsom, a worker at the center, said that upon arriving at the scene, the gunman shot a boy and his father in front of the building before heading to the classroom. The teachers locked the door, but the man shot and kicked her until the glass shattered, adding that he then attacked the children and the teachers with his knife and gun.

In the center there are usually between 70 and 80 children, but at the time of the assault there were fewer because for the older students the semester had already ended, he said.

“They would not have survived,” he said.

One of the youngest survivors is a 3-year-old boy who was riding a tricycle near his mother and grandmother when the attacker began stabbing them. His mother died of injuries while the minor and his grandmother were being treated at different hospitals, local media reported.

Among condolences from around the world, Pope Francis offered prayers for those affected by “unspeakable violence.”

“I am deeply shocked by the heinous shooting at a kindergarten in Thailand,” UN Secretary-General António Guterres tweeted.

Mass shootings are rare but not unprecedented in Thailand, which has one of the highest rates of gun ownership among civilians in Asia, with 15.1 guns per 100 inhabitants, compared to just 0.3 in Singapore and the 0.25 from Japan. The figure is well below that of the United States, where there are 120.5 guns per 100 people, according to a 2017 survey by the Australian NGO GunPolicy.org.

The country’s worst recorded shooting to date was carried out by an angry soldier who opened fire inside and outside a shopping mall in the northeastern city of Nakhon Ratchasima in 2020, killing 29 people. , left almost 60 wounded and faced the security forces for about 16 hours before being shot down.

Last month, an employee shot at his colleagues at the Thai Army War College in Bangkok, killing two people and wounding another before he was arrested.