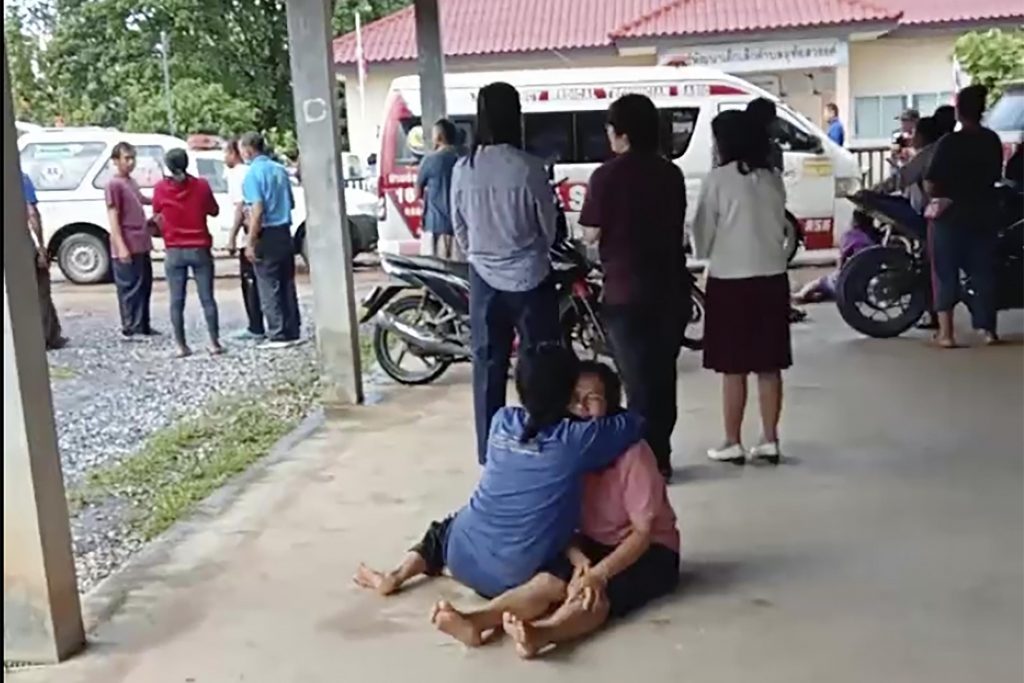 UTHAI SAWAN, Thailand (HPD) — A former police officer facing drug-related charges stormed a daycare center in Thailand Thursday, killing scores of preschoolers and some teachers and shooting more people as he ran. At least 36 people were killed in the worst mass shooting in the nation’s history.

The attacker, who had been fired from the police this year, took his own life after also murdering his wife and son at home.

The photographs taken by emergency personnel who attended the scene showed the bodies of children on the floor, wrapped in their blankets in the place where they were taking their siesta when they were killed. The infants had knife wounds to their faces and bullet wounds to their heads, amid pools of blood, according to the images.

A teacher told public broadcaster Thai PBS that the assailant got out of a vehicle and immediately shot dead a man eating lunch outside the nursery, then fired more shots. When she paused to reload her weapon, the teacher took advantage and ran inside.

The massacre occurred in the rural town of Uthai Sawan, in the northeastern province of Nongbua Lamphu, one of the poorest areas in the country.

Another witness said that the nursery staff had completely closed the doors, but the attacker shot them open.

“The teacher who died had a child in her arms,” ​​the witness, whose name was not provided, told Thailand’s Kom Chad Luek television. “I didn’t think she would kill children, but he shot at the door and he shot through it.”

At least 10 people were injured, including six who are in critical condition, said Archayon Kraithong, a police spokesman.

Video taken by an arriving rescuer showed first responders rushing into the single-level building through a shattered glass front door, and there were drops of blood on the floor of the entry hallway.

In a video broadcast on the internet, desperate families could be heard crying outside the building. One image showed the floor splattered with blood and mats scattered in the room. Pictures of the alphabet and other ornate decorations adorned the walls.

Police identified the killer as 34-year-old former police officer Panya Kamrap. Police Major General Paisal Luesomboon told PPTV in an interview that the officer was fired from the force this year due to the drug-related charge.

In a Facebook post, Thai Police Chief Gen. Dumrongsak Kittiprapas said the attacker was a sergeant and was due to appear before authorities on Friday in a methamphetamine-related case. He surmised that he might have attacked the nursery since it was located near his home.

Earlier, Dumrongsak told reporters that the main weapon used was a 9mm pistol that the attacker had bought. Paisal noted that the subject also had a shotgun and a knife.

Thai Prime Minister Prayuth Chan-ocha, who is scheduled to visit the nursery on Friday, told reporters that according to initial reports, the former police officer had personal problems.

“This should not happen,” he said. “I am deeply saddened for the victims and their relatives.”

Police have not yet released a full breakdown of the death toll, but said at least 22 children and two adults were killed at the nursery. At least two more children were killed elsewhere.