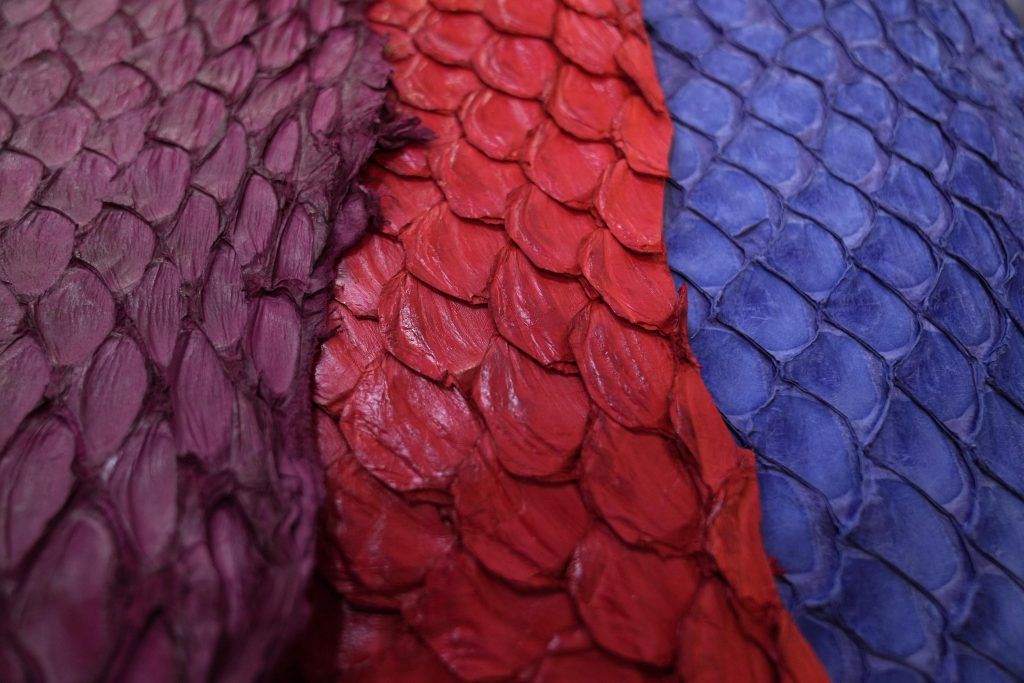 TRES RÍOS, Brazil (HPD) — Sometimes you start something and you have no idea where it will take you. So it was with Eduardo Filgueiras, a struggling guitarist whose family worked in an unusual business in Rio de Janeiro: they raised toads. Filgueiras figured out a way to take the tiny toad skins and string them together, creating something big enough to sell.

Miles away in the Amazon, a fisherman and a scientist come up with something that could save a huge fish that thrives in freshwater lakes alongside tributaries of the Amazon River.

The ingenuity of these three men is why beautiful and unusual sustainable fish skin can now be found in luxury New York handbags, cowboy boots, and in an image from the photo shoot Vogue did when Rihanna she was pregnant, where a red jacket with fish scales hangs open over her belly. The sales provide a living income to hundreds of Amazonian families who also keep the forest standing and healthy while protecting their livelihoods.

TAKING ADVANTAGE OF A GIANT

The skin comes from pirarucu fish, a staple food in the Amazon that is gaining new markets in Brazil’s largest cities.

Indigenous communities working together with non-indigenous riverside settlers manage the pirarucú in preserved areas of the Amazon. Most of it is exported and the United States is the main market.

The pirarucú, also called paiche or arapaima fish, can grow up to 3 meters (10 feet). Overfishing put it in danger, but things started to change when fisherman Jorge de Souza Carvalho, known as Tapioca, and academic researcher Leandro Castello teamed up in the Mamiraua region and devised a creative way to count the fish in the lakes. , the favorite habitat of the giant fish.

They took advantage of something special about this species: it comes to the surface to breathe at least every 20 minutes. A trained eye can count how many flash their red tails in a given area, coming up with a fairly accurate estimate.

The government recognizes this counting method and authorizes directed fishing. By law, only 30% of the pirarucú in a particular area can be fished the following year. The result is a recovering population in these areas, allowing for larger catches.

In riverside communities, people eat the fish skin and all. But in the large slaughterhouses, where most of the captured pirarucú is processed, the skin was discarded. Then the Nova Kaeru tannery appeared on the scene.

Thousands of kilometers away from the Amazon, up a steep dirt road on the outskirts of Rio de Janeiro, Nova Kaeru will process some 50,000 skins of legally caught arapaima fish this year.

This midsize company got off to an unlikely start. In 1997, Filgueiras, the guitarist, became involved in his family’s toad business, raising amphibians for meat. He was struck by the beauty of his skin, but it was all thrown away. He decided to use it, took a course in leatherworking and began to experiment.

“I had no financial resources. I bought a used cement mixer and covered it with fiberglass, adapted a washing machine and started working on frog skin,” Filgueiras told The Associated Press in his office.

He managed to transform the skin into leather, but there was a problem: it was too small. No client wanted her. Filgueiras tried to sew it up, but the result was too ugly. So he invented a way to weld various pieces together.

His creation began to attract attention at international fairs. A few years later, with a partner, he founded the Nova Kaeru fur shop, specializing in exotic skins, expanding to salmon and ostrich with techniques that do not produce toxic waste.

Then, one day, a businessman knocked on the door with a pile of pirarucú skins. Experimenting with the new skins, Filgueiras discovered that he could fix the many holes in the pirarucu skin using the same technique that he had created for the toad skin.

The first results impressed him. Meanwhile, the businessman died in a plane crash. With no previous experience in the Amazon, so different from its base of operations in Rio de Janeiro, the company decided to source arapaima fish skin on its own from the vast region.

They contacted the people who manage fishing in the state of Amazonas. That network has now grown to 280 riverside and indigenous communities, most of them in protected rainforest areas, employing some 4,000 fishermen, according to Coletivo do Pirarucu. The Nova Kaeru tannery bought the skins, it was the first buyer that the communities had, and today it is the most important.

“The commercialization of fur has been essential for riverside communities,” Adevaldo Dias, a riverine leader in the Médio Jurúa reserve, told The Associated Press in a telephone interview. “It helps make the whole business viable.”

The Association of Rural Producers of Carauari, of Médio Jurúa, sells each skin for 37 dollars, a significant sum in a country where the minimum wage is around 237 dollars a month. The money helps pay the fishermen, who receive $1.60 per kilo (2.2 pounds). Dias says that the ideal price should be $1.9 per kilo to cover all costs related to managing the fishery. They hope to earn that in the near future by exporting pirarucú meat.

From Médio Jurúa and other regions, the pirarucú leather must travel several thousand kilometers by boat to Belem, where it is loaded onto trucks for another long journey to the Nova Kaeru headquarters, a journey of several days. From there, foreign buyers are shipped by plane.

Pirarucú skin was first introduced to Texas, where it is used in cowboy boots. And the fashion industry is paying more and more attention to it. In New York City, luxury brand Piper & Skye has used pirarucu leather for shoulder bags, fanny packs and purses that can cost up to $850.

“The arapaima fish is food for local communities and a source of livelihood for people in the areas where it is fished and beyond, it is not just a durable and beautiful material. It promotes the circularity of the species by using a material that would otherwise go to waste,” Joanna MacDonald, the brand’s founder and creative director, told the HPD by video call.