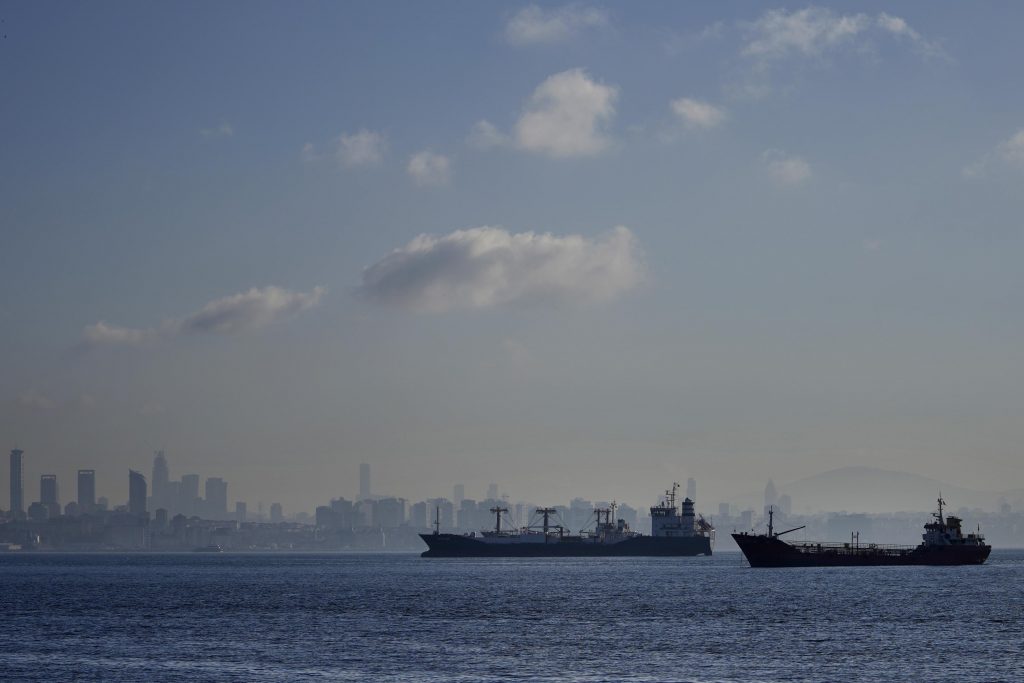 LONDON (HPD) — Ships loaded with grain left Ukraine on Tuesday, despite Russia suspending its participation in a UN-brokered deal to allow safe passage of food during the war.

But the UN said no ships would set sail on Wednesday, raising questions about future shipments.

Three ships carrying 84,490 tons of corn, wheat and sunflower meal left Ukraine through a humanitarian sea corridor established in July, while another 36 ships passed inspections near Turkey to head to their destinations, the UN reported.

The corridor, brokered by Turkey and the UN, was seen as a breakthrough that would ensure that Africa, the Middle East and parts of Asia would receive grain and other food from the Black Sea area during the war in Ukraine.

Russia announced over the weekend that it would suspend its participation in the grain deal, citing a Ukrainian drone attack on Russian Fleet ships in the Black Sea. The Russian Defense Ministry declared on Monday that the passage of ships from southern Ukrainian ports had been stopped, calling the naval movement “unacceptable”.

But a total of 14 boats set sail that day, including one hired by the UN World Food Program to bring wheat to Ethiopia, which along with neighboring Somalia and Kenya, is severely affected by the worst drought in decades. The UN has warned that parts of Somalia face famine. Thousands of people have died in the country.

Although some grain ships left Ukraine this week, the UN said there would be no more such shipments on Wednesday. Amir Abdulla, the UN coordinator for the deal, tweeted that “we expect loaded ships to set sail on Thursday.”

But it was not clear what will happen in the coming days. Ukraine, Turkey and the UN have carried out ship inspections without Russia, allowing some shipments to continue, in what the international body called “a temporary and extraordinary measure.”

After suspending its participation, “Russia is likely to use this as a negotiating tool to get what it needs out of the deal,” Anderson said. “We know that Russia has been trying to export fertilizers and get an extension of sanctions in order to do so effectively.”

Although Western sanctions against Russia do not affect its grain exports and a side deal was intended to clear the way for the country’s food and fertilizer shipments, some shipping companies and insurers have been wary of running afoul of sanctions or they want to avoid doing business with Moscow.

Russian President Vladimir Putin raised the fertilizer issue in a call with Turkish President Recep Tayyip Erdogan on Tuesday, in which he said Russia’s agricultural exports were not yet unblocked. Putin also said the resumption of the grain deal would require an investigation into the attack on the Russian Black Sea Fleet, the Kremlin said.

Erdogan told Putin “that if they resolve the grain crisis with a constructive approach, they will (also) encourage steps back to negotiations” to end the war in Ukraine, according to the Turkish presidential office.

Analysts say Russia remains bound by the terms of the deal it signed, which includes a commitment not to attack civilian ships participating in the deal. Such an attack would also violate international law.

“Although it is not currently a party to that agreement, it remains a signatory to it. Russia’s interests will not be served in any way by attacking ships and groups from the international community,” Anderson said.

He added that Russia’s main concern is likely to be that the vessels are not inspected and could be used to introduce weapons. The July agreement established an Istanbul-based Joint Coordination Center to coordinate controls between the warring nations, Turkey and the UN.

Russia has announced plans to carry out its own inspections of ships that have already passed joint checks in Istanbul, but no further details are known.