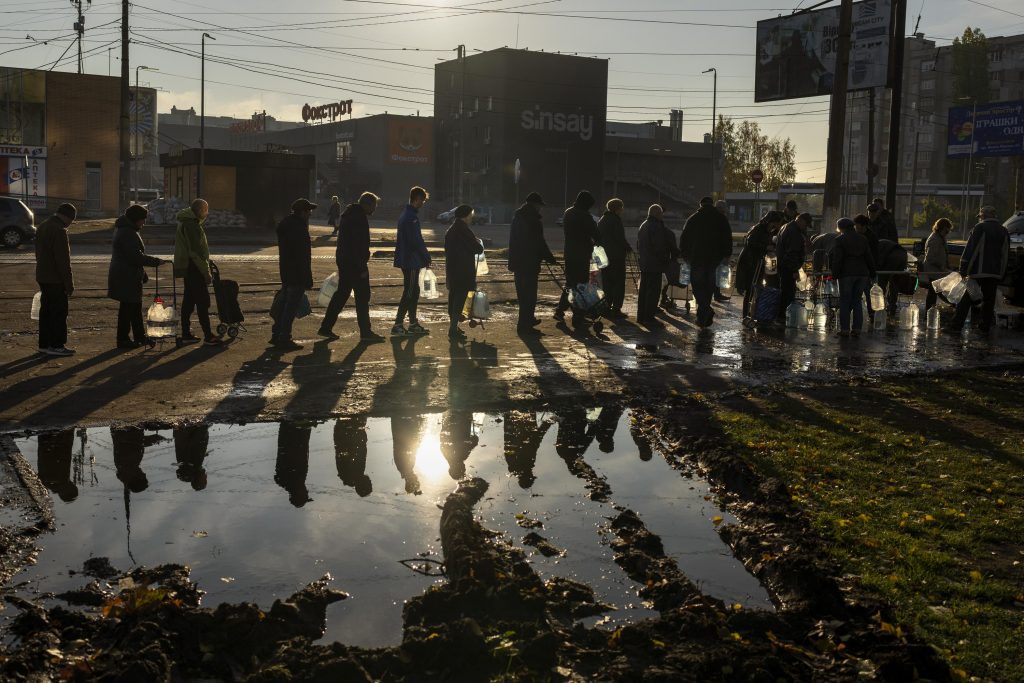 kyiv (HPD) — Ukrainian authorities were trying Monday to calm fears among the population after it emerged that Russia has used Iranian drones to carry out attacks, pointing to growing success in shooting down the small aircraft. At the same time, talk of a “dirty bomb” attack has added another worrying dimension to the conflict, which is entering its ninth month.

Ukrainians are bracing for less power this winter following Russia’s persistent attacks on infrastructure across the country in recent weeks. Meanwhile, citizens of the southern city of Mykolaiv queued for water and essential supplies as Ukrainian forces advance on the nearby Russian-occupied city of Kherson.

Ukrainian forces have shot down more than two-thirds of the nearly 330 Shahed drones Russia has fired on as of Saturday, the head of Ukraine’s intelligence service, Kyrylo Budanov, said in an interview published on Monday. Budanov said the Russian military had ordered about 1,700 units of various types of drones, and a second batch of about 300 Shahed is currently being deployed.

“Terror with the use of ‘Shaheds’ can last a long time,” he was quoted in the Ukrainska Pravda newspaper, adding: “The air defense is basically coping, 70% are shot down.”

Both Russia and Iran deny using Iranian-made drones in the war.

Budanov also downplayed speculation that Russian forces are preparing an immediate exit from Kherson, even though an evacuation of civilians and others, such as bank staff and teachers, is taking place. Budanov said the remarks to that effect by the newly appointed Russian commander in Ukraine, General Sergei Surovikin, were aimed at “preparing the ground” in the event of a full withdrawal, which the Ukrainian official predicted would happen by the end of year.

“But at the same time I can’t say that right now they are fleeing from Kherson,” Budanov said.

Meanwhile, Russian authorities have removed monuments to 18th-century Russian military chiefs Alexander Suvorov and Fyodor Ushakov from Jerson, claiming the action was aimed at saving them from Ukrainian attacks on the city.

On Saturday, Russian-installed authorities called on all residents of Kherson to leave “immediately” in the face of a counteroffensive by Ukrainian soldiers to retake the city – a key route to Crimea, a Ukrainian territory annexed by Russia in 2014 – which has been in Russian hands from the first days of the war.

Relentless Ukrainian artillery attacks on Kherson have cut off major crossings of the Dnieper River, which bisects southern Ukraine, leaving Russian soldiers on the west bank without supplies and vulnerable to being cornered. The region is one of four that Russian President Vladimir Putin illegally annexed last month and placed under Russian martial law last week.

For his part, Ukraine’s top diplomat called on the UN nuclear watchdog to immediately send an inspection team to the country to counter Moscow’s claim that kyiv is preparing a “provocation” involving a dirty bomb.

Ukrainian Foreign Minister Dmytro Kuleba said on Monday that he made the request in a call with Rafael Grossi, head of the International Atomic Energy Agency (IAEA).

Kuleba said that Grossi had agreed to send a team of inspectors, adding that “unlike Russia, Ukraine has always been and remains transparent. We have nothing to hide.”

Defense Minister Sergei Shoigu said in phone calls with his counterparts in the United States, Britain, France and Turkey that Ukraine was preparing a provocation with a dirty bomb, a device that uses explosives to disperse radioactive material.

The three Western countries said in a joint statement that they “reject Russia’s transparently false accusations that Ukraine is preparing to use a dirty bomb on its own territory.”