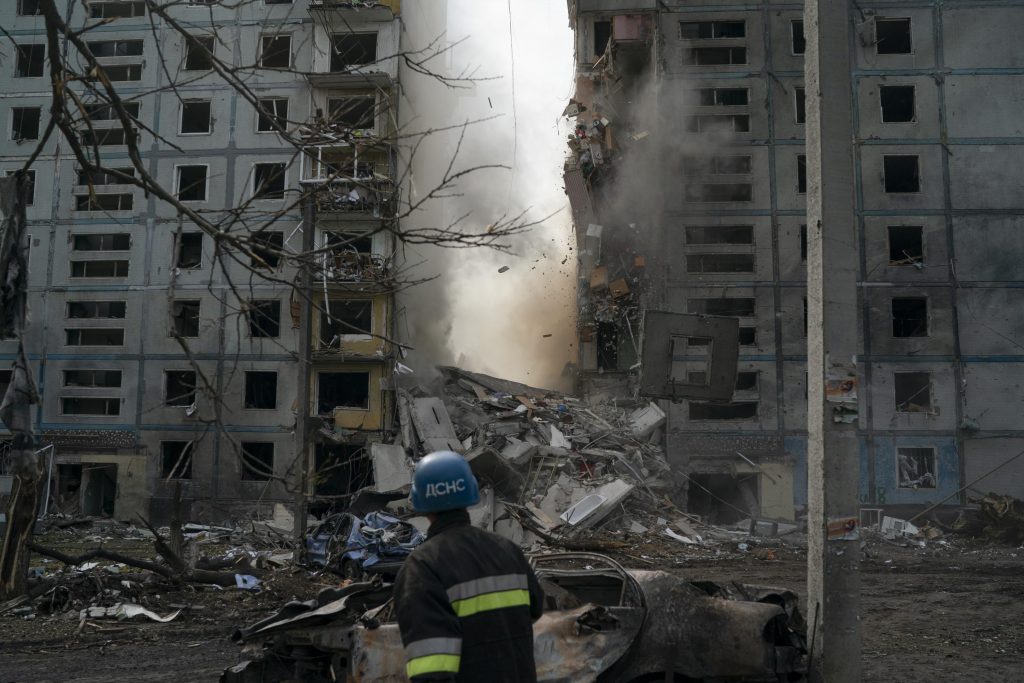 kyiv, Ukraine (HPD) — When a missile hit a power station less than a mile from his apartment on the outskirts of kyiv, Oleksander Maystrenko didn’t panic, run to a bomb shelter or think about evacuating, even though he lives nearby. what has suddenly become the main objective of the Russian army in the war: anything related to the vital Ukrainian infrastructure.

His neighbors have not moved either, although Tuesday’s attack, accompanied by a loud explosion, killed three people, caused serious damage to two facilities in the plant complex and temporarily left some 50,000 homes without power, according to the mayor of kyiv, Vitali Klitschko.

“We are not afraid because we are not only logistically prepared, we are morally prepared,” Maystrenko said outside his apartment building, where he and two neighbors sat on a bench smoking just hours after the attack.

This is what the new phase of war in Ukraine looks like after almost 8 months of invasion. Moscow has openly declared its intention to attack more and more energy, water and other key infrastructure centers. A Ukrainian energy official said Wednesday that 40% of the country’s power system has been severely damaged, and President Volodymyr Zelenskyy said Ukrainian forces have destroyed 30% of Ukraine’s power stations since Oct. 10.

But Maystrenko and his neighbors say they are prepared.

If the Russians leave them without electricity, there are reserves of flashlights and candles, he said. If there is no gas for the kitchens, he has a plan to build a rudimentary oven in front of the building’s entrance and light it with firewood that he has been gathering. They have bottled water and cans of pickled vegetables and canned food safely stored.

Everyone knows to have plenty of blankets and warm clothes for winter, he added.

“It has never been a secret that this power plant is a target, but we have been preparing since the war began,” Maystrenko said. The preparations have created a sense of community and a united front among neighbors, who previously knew each other only in passing and face a common enemy, he explained.

The attacks occur at a critical time, before winter. Klitschko said Thursday was the start of the heating season in kyiv, which like most urban centers in Ukraine and even Russia uses a Soviet-era central system controlled by the municipality, supplying heating to apartments and businesses.

Following Zelenskyy’s meeting with government ministers, members of energy companies and local authorities, presidential adviser Kyrylo Tymoshenko said there would be power supply restrictions across Ukraine between 7 and 11 a.m. starting Thursday, and that in some cities street lighting would be limited.

“Please take this seriously,” Tymoshenko said on his Telegram channel. “This affects residents of ALL regions of the country. (…) These are compulsory measures. Therefore, we all work together on our front!”

One place where the attacks cut off power and running water was Energodar, a southern city near the Zaporizhia Nuclear Power Plant, one of the biggest sources of concern in the war. The missiles have also caused serious damage to an energy facility in Zelenskyy’s hometown of Krivoy Rog in south-central Ukraine, leaving several small and medium-sized towns and an urban district without power, according to the regional governor. .

Using the energy supply as a weapon is not a new tactic for the Kremlin, especially when it comes to Ukraine.

“Energy was always a wild card for the Russians, and they claim that by controlling energy they can control the country,” said Hanna Shelest, director of security programs at the kyiv-based Foreign Policy Council Ukrainian Prism.

Russian President Vladimir Putin, who declared martial law in four illegally annexed Ukrainian regions, has used his ability to cut off gas through the country’s extensive Soviet pipeline network as a tool of pressure. He has used this tactic not only against the government in kyiv, but also against European countries that depend on him for energy and built pipelines for Russian gas through the Baltic Sea.

With its new strategy, the Russian military hopes to destroy enough Ukrainian infrastructure to make life so unbearable that the population blames its own government, Shelest said.

Putin has described Ukraine as a failed state and a historical part of Russia. He now tries to make the suffering make the Ukrainians believe him, the expert pointed out.

“What we see now is that it definitely doesn’t work very well,” Shelest said. Ukrainians, she added, are increasingly directing their anger at Putin.

It is striking that Zelenskyy admitted that Russia has put nearly a third of Ukraine’s power stations out of service, said Mason Clark, an analyst at the Washington-based Institute for the Study of War.

“If the Russians can sustain that damage on an ongoing basis, and the Ukrainians can’t repair it, that would start to have an effect,” he said.

Clark said he did not believe that Russia could affect the majority support of the Ukrainian population for its army to retake the territory occupied by Moscow.

Recent attacks on civilian homes and other non-military targets with missiles and what kyiv describes as Iranian-supplied drones “appear to be just terrorist attacks, basically trying to intimidate the Ukrainian population,” he said.

Russia has used such tactics throughout the war in “the false belief that they will be able to force the Ukrainians to surrender and force negotiations,” Clark said.

On the military front, the use of Iranian-supplied drones and Kalibr and Iskander cruise missiles against Ukrainian infrastructure is “a very poor use of limited precision munitions,” Clark said.

Russia is struggling with its dwindling stockpiles of these high-end weapons, he noted, and reserving them for the battlefield would be a more strategic move because Ukrainian air defenses have managed to intercept and shoot down many of the drones.

“It is a waste by the Russians of very expensive and limited systems in an attempt to probably achieve a terror effect that is not going to persuade the Ukrainian population or government,” Clark said.

Repairing infrastructure is usually the task of local governments. The southern Ukrainian port city of Odessa has formed teams to help neighboring Mykolaiv, which has been under Russian bombardment for weeks.

In the Kharkiv region, repairs are underway to heating systems around the newly liberated city of Kupiansk, but it is a slow process that requires first restoring electricity, gas and running water, government representative Roman Semenukha said. .

“I want to emphasize that private houses will be connected to the gas supply, but with tall buildings it is a bit more complicated, for various reasons,” said Andrii Besedin, adviser to Kharkiv’s military administration.

Regional authorities in Kharkiv are also studying firewood needs, Besedin said. Heated shelters will be set up and authorities will offer to evacuate those who want to leave for the winter.

“Those who want to do it (will move) to safe areas, where all the communications are. We will work every day to restore the critical infrastructure of these networks,” he said.

Justin Spike contributed to this report from Kupiansk.