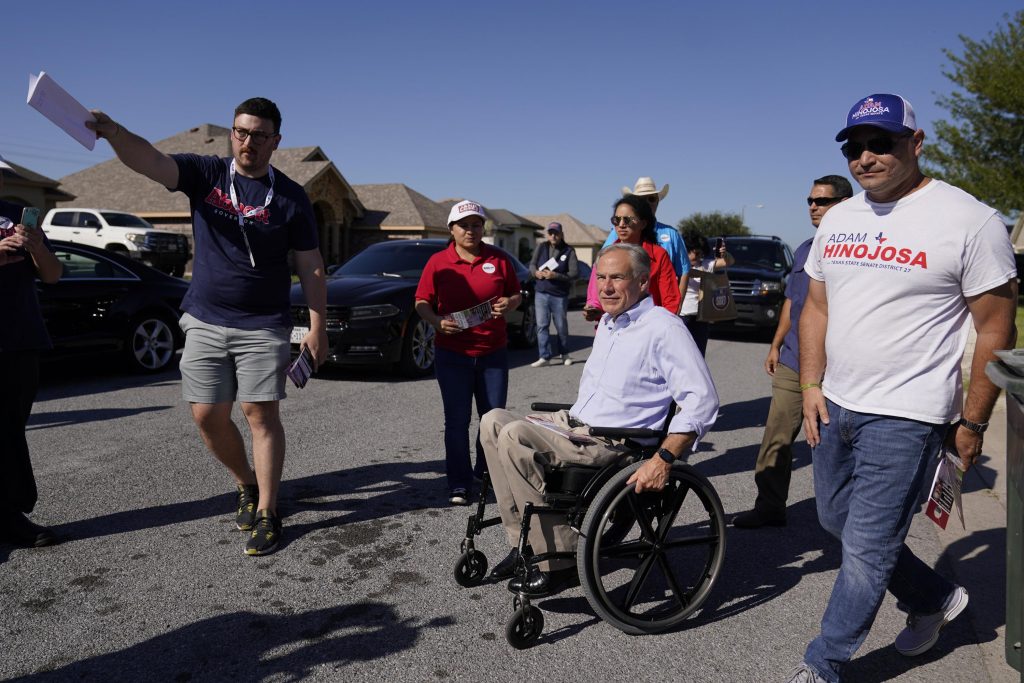 HARLINGEN, Texas (HPD) — With the election weeks away, Texas is once again spending a lot of money hunting for votes, with signs of changing trends and forecasts of totally unexpected results.

This time, however, the forecasts do not come from the Democrats, who always say that the growth of the Hispanic population will finally give them victory in this state, but from the Republicans.

“We are going to dye the Rio Grande (Bravo for Mexicans) red,” the color of the Republicans, Republican Governor Greg Abbott said during a rally in the border city of Harlingen.

While the Democrats, encouraged by the growth of the Hispanic population, seek once again to win the largest Republican state in the country, the Republicans also have ambitious goals in the November 8 elections, which are not limited to maintaining their hegemony At the state level: They want to win on the border with Mexico, populated mostly by Hispanics and where for years a Democratic victory was taken for granted.

The undertaking is not easy, as is Democrat Beto O’Rourke’s campaign for governor, held by Abbott. But they are banking on their strategy of portraying the border as a 1,200-mile (1,900-kilometre) expanse where danger and chaos abound as a result of the illegal entry of unprecedented numbers of migrants from Mexico.

Democrats say that transporting migrants by bus and plane to other parts of the country will hurt Republicans, but at the same time they admit that they cannot neglect the Hispanic vote.

Still, the fact that several races along the border are shaping up to be tight is creating fissures in a major Democratic stronghold two years after Donald Trump delivered unexpectedly strong results among Hispanics in the 2020 presidential election.

“This is the first time there have been so many competitive races,” said Republican Carlos Cascos, a Democrat who switched to the GOP and was Abbott’s first secretary of state.

Cascos does not believe that the Republicans are going to sweep away the Hispanic vote in the Rio Grande Valley, where there are 1.5 million inhabitants. But he affirms that “things are changing” and it can no longer be said that the Democrats are guaranteed the Hispanic vote.

Democrats still have an advantage in South Texas, in part because there are many moderate candidates, less vulnerable to Republican attacks and questioning some things about President Joe Biden, who is not very popular in a period of high inflation.

However, the victory of Republican Representative Maya Flores in a special election this year, in which she became the first Hispanic Texan in the House of Representatives, indicated that things may indeed be changing. Flores will try to retain her seat against Democrat Vicente González, who changed districts to have a better chance of snatching her seat.

Monica de la Cruz, a candidate for the lower house in the closest race in Texas, in a district that stretches from east San Antonio to McAllen and other border communities, “the elites do not understand (what is happening) because illegal immigration It has practically no impact on their lives.”

Former South Carolina Gov. Nikki Haley was scheduled to appear at rallies for Flores and de la Cruz at the border on Monday, in a rare incursion of nationally prominent Republican figures on the border.

These efforts coincide with the opening of 38 minority outreach centers by Republicans across the country, including McAllen and another border city, Laredo, as well as Houston and San Antonio, two cities with large Hispanic populations.

Some of these centers offer services such as tutoring for citizenship classes and tax advice. They also host movie screenings, dinners, business discussions, and workshops on topics such as cryptocurrencies.

Some of these offices opened more than a year ago.

The Republican Party says it has invested millions of dollars in efforts to capture the Hispanic vote across the country. And it has 32 Hispanics — a record number — aspiring to seats in the lower house, although several of them have no chance of succeeding.

The Democrats, for their part, opened an office in McAllen in April that coordinates national campaigning, with three people focused on regional contests. It is the first time they have taken such an initiative in years.

Richard Gonzales, director of the Democratic Party branch of Hidalgo, a county that includes McAllen, said party leaders hold weekly Zoom calls with people from O’Rourke’s campaign to coordinate efforts to encourage turnout. . He noted that the gains by Trump and the Republicans were real, but were associated “with specific candidates” and are unlikely to be repeated.

O’Rourke has in the past given Ted Cruz a scare in a Senate race and has also run for president.

“People say the Democrats are done for here and the Republicans are going to take over, but that’s not true,” Gonzales, a Democrat, said, referring to South Texas. “However, they gave us a wake-up call and we understood that victory can no longer be taken for granted” among Hispanics along the border.