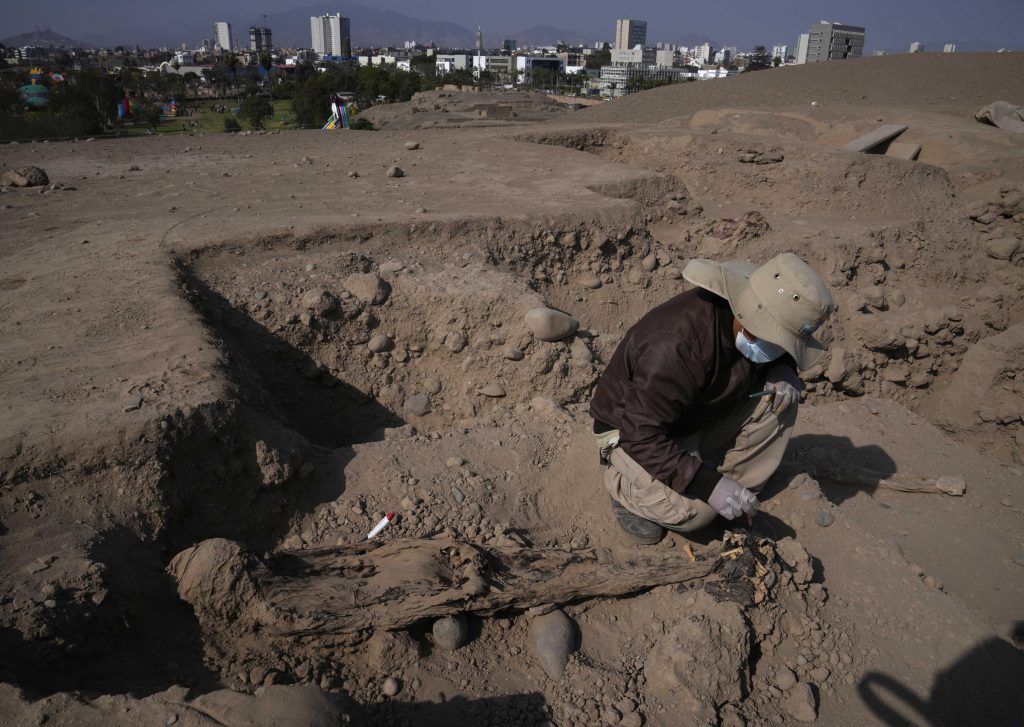 LIMA (HPD) — Peruvian archaeologists have found a colonial cemetery in a remote area of ​​an extensive park, zoo, botanical garden, but also an important archaeological site, which is the best known and favorite of children in Lima.

In Peru it is common to find pre-Hispanic cemeteries under certain streets while workers expand the natural gas network, but the discovery of a colonial-era cemetery surprised even Lucenida Carrión, head of archaeologists for two decades of the “Parque de las Leyendas”.

″A graveyard here? I would like to go, but it scares me,” said 7-year-old Johan Castillo, who was playing with his friends inside the park, next to a giant inflatable slide that was shaped like Minnie Mouse, the fictional Walt Disney character.

In August, Carrión’s team found three bones and in October another eight, one of them with a wooden cross on its chest.

“We hadn’t thought we were going to find a colonial-era cemetery here,” Carrión said Friday as he inspected the finds.

The archaeologist indicated that the bones were looking at the sky, in dorsal decubitus position. A skeleton with a cross on its chest also carried a woven bag containing a wooden comb and a turquoise glass bead.

The bones were not in coffins, but wrapped in blankets. The presence of a Catholic cross 53 centimeters long by 26 wide “undoubtedly demonstrates” that they are skeletons from a time after the 16th century when the Spaniards arrived in Lima, even bringing the Catholic religion, Carrión said. Lima was founded in 1535.

Carrió indicated that the recent finding is not the only one. In 2013, the remains of 138 pre-Hispanic dogs were found in another area of ​​the park and almost the same number of human burials, but all with an age of 1,000 years and belonging to a pre-Inca culture called Ichma.

The “park of legends” has 97 hectares within which there is a zoo with more than 1,500 animals, a botanical garden with 5,000 plants and 53 archaeological sites built of mud that are scattered throughout the park and that belonged to pre-Hispanic cultures.

In a city of 10 million inhabitants —which has less than nine square meters per person suggested for recreation and green areas by the World Health Organization— the presence of a gigantic park has made it the favorite for decades. childhood.

Thousands of children come to the park from all over the capital, even schools schedule visits to see inside areas designed with typical plants and animals that represent specific sectors of the Andes and the Amazon.