Skip to content
Home » Panama: Venezuelans seek to return to their country after passing through the jungle 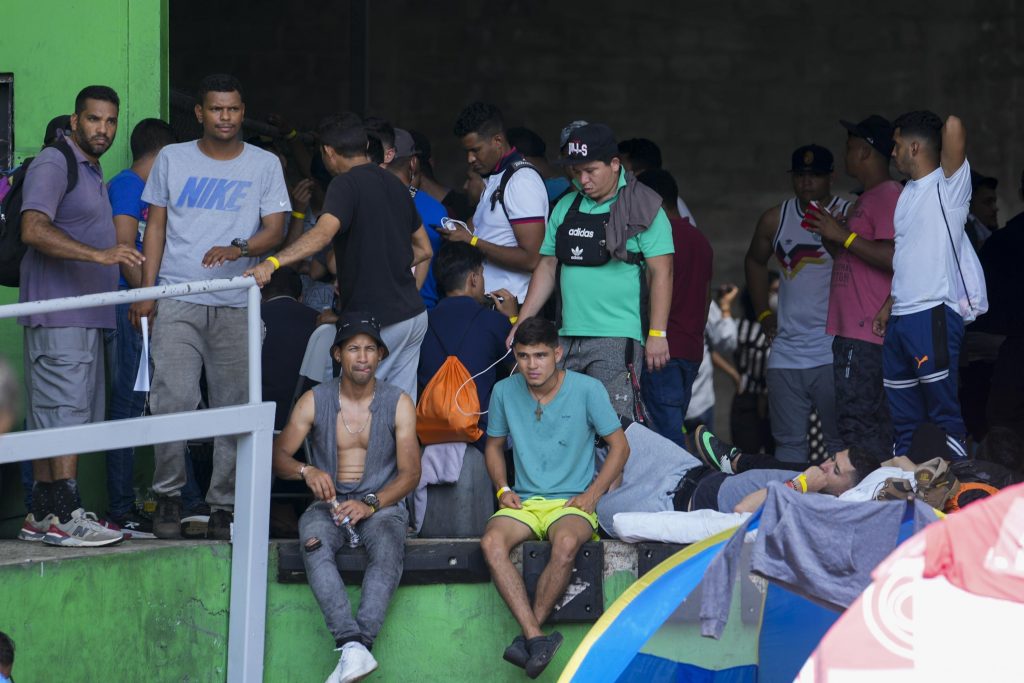 PANAMA (HPD) — With broken dreams and empty hands, many Venezuelan migrants stranded in Panama have begun to return to their country after crossing the dangerous jungle of Darién, on the border with Colombia, after the government of President Joe Biden put a new migratory control for the displaced of that South American country is in force.

A temporary shelter built in an industrial zone in the center of the Panamanian capital gives refuge to hundreds of Venezuelans while they find a way to return by plane to Venezuela. Meanwhile, the Panamanian authorities face the possibility that part of these migrants may decide to stay.

The scenario “has been complicated for us because before Panama was a passing country. Now with this measure, with this notification, people have returned to Panama, some with an interest in staying, but most of them with an interest in returning home,” said the director of the Panama National Immigration Service, Samira Gozaine.

“Clearly we were not prepared to house so many people,” he said.

In the shelter, the migrants narrated how grief invaded them in the middle of the jungle when they learned about the migratory restrictions of the US government that collapsed the hope of reaching North America in search of job opportunities in the face of the economic and social crisis that overwhelms their country. .

The United States announced last week that it will return Venezuelans who cross the border illegally from Mexico and that it will accept up to 24,000, for which they must previously register in a program, have a financial sponsor in the country and arrive by air.

Some 1,000 Venezuelan migrants have left Panama in recent days on charter flights back to their country after the new US migration plan was announced, according to Gozaine.

Jorge Lizcano, 31, left the department of Táchira with a group of 17 people, including his brother, a cousin and a friend willing to cross the Darién, which in addition to the dangers of the jungle also carries the threat of criminal groups that extort and rob the displaced.

Lizcano described that they were in Panamanian territory in a camp near the Caribbean Sea when they found a corner where there was a telephone signal. “We turned on the cell phone to let the family know that we were fine… when we turned on the cell phone, the only news that reached us was that the border had already been closed, that there were no more opportunities. At that moment we received that news and it destroyed everything, everything, ”she recounted.

Despite this, the group decided to advance, harboring a minimum of hope that when they left the jungle the news had changed. “At that time we did not believe, we thought it was a lie, we started calling relatives who were in the United States, in Chile, and they confirmed that yes, it was true… we bowed our heads, we cried and despite that we still had like that hope of reaching Panama.”

The man said that the group managed to get out of the jungle and reach the camps of the United Nations and the Panamanian security authorities and after several supervisions they paid 40 dollars for a bus ticket that took them to the Panamanian province of Chiriquí, border with Costa Rica, where they had to face the dilemma of continuing their trip or returning.

Group eight arrived at the shelter in the Panamanian capital on Monday and Lizcano’s cousin, friend and brother returned on flights to Venezuela. The man is waiting for a humanitarian flight that will return him to his country because he ran out of money, but he is sustained by the hope that he will be able to spend Christmas with his wife and his children.

“The only option is to go back to Venezuela… the nice thing is that my mom, my dad, my children are waiting for me and I think that is also something that will help me move forward. We all lost what little there was,” she lamented.

In the shelter in Panama City there are about 600 Venezuelan migrants and hundreds more are expected to arrive. The refuge is coordinated by the Venezuelan consular mission in Panama. Migrants have said that the unit charges $280 for airfare and that some have managed to pay for it, while others wait for a flight paid for by humanitarian organizations or private individuals.

According to official figures, 206,000 migrants have crossed the Darién so far this year, 170,000 of them Venezuelans. Gozaine said that the number of migrants from that South American country transiting through the Darien jungle has decreased in recent days, going from 4,300 daily to about 900.

Also in the refuge is José Gregorio Baez, 24 years old and a native of the town of Valencia, who undertook the trip to North America, crossed the Darién Gap between September 20 and 29 and learned of the migratory restrictions when he was traveling for Nicaragua.

Even so, he decided to advance, but when he arrived in Guatemala he chose to return. “I didn’t continue because it was like continuing to lose money, because with the news that they closed there I decided better to return and right now I’m looking for a flight to my country of origin,” he said.