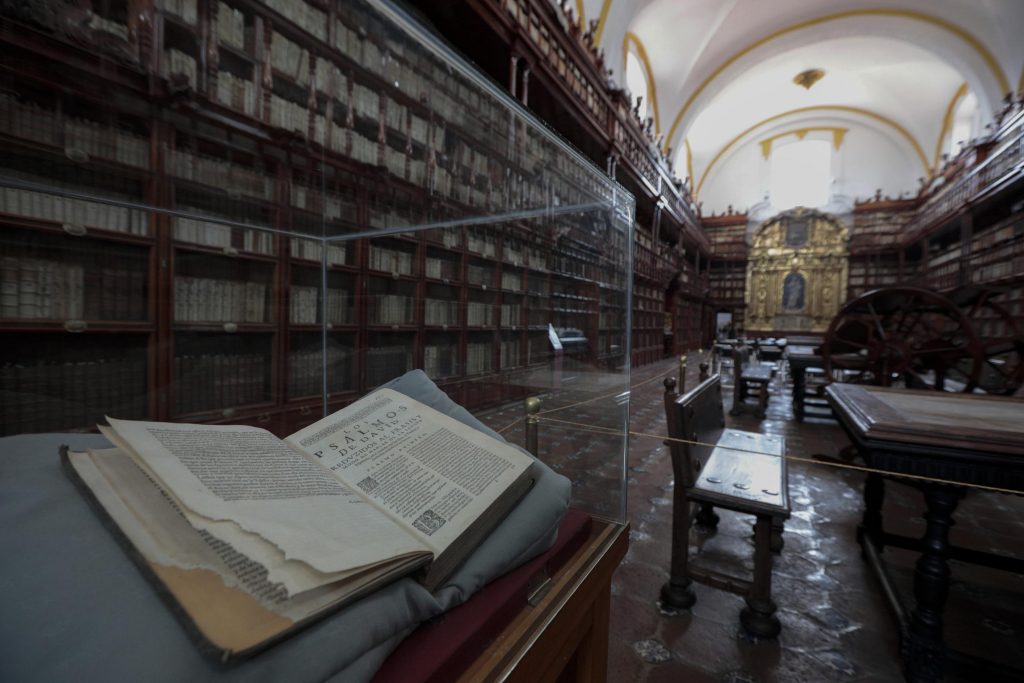 PUEBLA, Mexico (HPD) — Here it smells of wood and that which is perceived in the first encounter with a book that has not been opened in many years.

The first public library in America was founded in 1646 and was the dream of a bishop. Juan de Palafox y Mendoza did not see his project completed, but the Palafoxiana attests to its importance in Puebla, a city in central Mexico that was fundamental for religious, economic, and social affairs during the Spanish conquest.

One of the greatest prides of the Palafoxiana is having been named “Memory of the World” by UNESCO in 2005 and when visiting it one understands why. Each spine, each golden edge of its pages and each book on its shelves seems like a treasure that preserves the wisdom of our species.

To get to the Palafoxiana you have to walk through the streets of the heart of Puebla until you find the Casa de la Cultura, a colonial-style building next to the Cathedral that housed a college for seminarians in the 17th century. Once there, you must cross a patio to reach the stairs, go up to the first floor and find two huge wooden doors that, if closed, would make the library go unnoticed.

Crossing the entrance, the scene is from a movie. More than 45 thousand books form horizontal rows that lead to a central altar. Although it is a library, the arches of its vault refer to a chapel. Walking through it is like walking through a sacred precinct in which access to knowledge seems to lead to the divine: a painting of the Virgin of Trapani awaits in the background framed by neoclassical columns covered in gold.

The volumes are organized on cedar shelves that are distributed on three levels according to the scholastic conception of man, which indicates that the foundation of all knowledge is God or that reason is subordinate to faith.

On the first floor there are more than 11,000 bibles and tomes of a religious nature such as bishops’ councils and theological texts that allow the study of areas such as patristics, which refers to the fathers of the Church. The second is dedicated to the relationship between God and man —chronicles of religious orders or the lives of saints— and the third contains books on physics, mathematics, botany, language, architecture and even carpentry.

“Everything that was imagined at that time is in the library,” Juan Fernández del Campo, current manager of the Palafoxiana, explains to The Associated Press.

Like the city itself, the library had a religious origin. Puebla was founded only ten years after the Spanish conquest, in 1531, when Bishop Julián Garcés dreamed that angels traced it near a river. A century and a half later, Palafox also took the first step to fulfill a dream: to donate five thousand books from his personal collection for the consultation of those who knew how to read and write.

From an office that is invisible to the eye of the tourist and that is hidden behind the altar of the Virgin, Fernández del Campo takes the bishop’s words with caution and comments that they can only be properly dimensioned if the context of that time is understood.

“If you read what Palafox says and look back in the history of Mexico, you say: wait a minute, no. It was not the time for Mexico to raise its wings towards freedom of thought”, he assures. “It was another situation, another order of ideas.”

What the expert is referring to is exercising logic: opening a public library allows access to knowledge and this promotes dissent and ideological freedom. Would that be desirable in a newly colonized city where the Church intended to maintain control?

The desire to found a public library could be somewhat paradoxical for those who delve into the history of Palafox. According to Fernández del Campo, when assuming the bishopric in Puebla in 1640, Palafox also took into his hands the task of asserting the king’s authority through the diocesan church, the one that does not depend on the religious orders, but on the Vatican and its bishops.

His encomienda alienated him with the Jesuits, who did not hesitate to question the royal authority and confront him. Those disagreements caused Palafox to be transferred to Spain in 1653 and they themselves were expelled a century later.

Since its foundation in 1646, the Palafoxiana collection has grown gradually. A considerable number of books were added to the collection when the Jesuits left Puebla and the material from its five colleges was left behind. The rest of the volumes arrived over time, most by donation. Among its treasures are nine incunabula —those printed between 1450 and 1500 with Gutenberg’s first printing techniques— and volumes by Galen and Vesalius, famous for their contributions to the study of medicine.

The heritage of the Palafoxiana transits between two worlds. In its almost 1,500 lockers, the word of God coexists with the contributions that man made to confront divinity. The interaction between these voices, affirms Fernández del Campo, makes it a witness of its time and “gives it something very special, a very own universality that makes a stagnant thought in the past coexist with a thought that is turning the screw to everything that had already been said”.

The memory of Palafox in the library that bears his name is still palpable. His coat of arms is carved on one of its doors. A sculpture that represents him watches from the top of his entrance to those who come to visit. His own Virgin of Trapani is the one that is observed in the central altar.

There are no sheets or explanatory texts that reveal the enigmas of the Palafoxiana to tourists or the curious, but next to its doors there are always volunteer guides who narrate its history to whoever is interested. The library remains public, although Fernández de Campo acknowledges that access is often prioritized for researchers who show a clear justification for accessing the material they request.

Palafox died in 1659 in the Spanish city of Osma, thousands of kilometers from the Puebla he loved so much, but given that he always expressed his desire to be buried here, a space inside the Cathedral bears his name and defines the place where his remains were to be preserved.

His surname still haunts the streets and buildings of Puebla like a ghost defending his legacy. In this city he founded the Dominican convent of Santa Inés, erected two schools to teach grammar, rhetoric and singing and hastened the completion of the construction of the Cathedral, which was achieved in 1936.

Perhaps nothing, however, compares to the Palafoxiana. There is no photo that is enough to capture its beauty or chronicle that does justice to the experience of walking in front of its shelves. After all, it is that space that combines the scope of the divine with the sagacity of man.

GETTING THERE: By road, the city of Puebla is about 130 kilometers from Mexico City and can be easily reached by car or bus. The library is open every day except Monday, with free admission on Sunday and Tuesday and a modest admission fee on other days.

The Associated Press’ religious news coverage is supported through a partnership with The Conversation US, with funding from the Lilly Endowment Inc. The HPD is solely responsible for all content