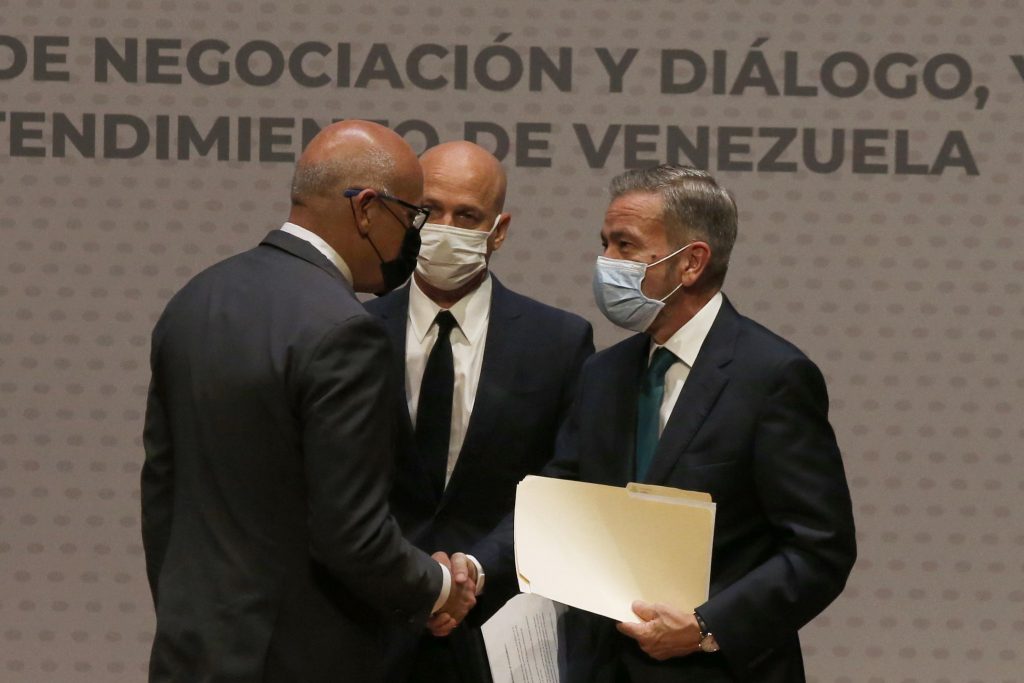 CARACAS (HPD) — The government of Nicolás Maduro and representatives of the Venezuelan opposition, led by Juan Guaidó, will resume talks suspended since October last year in Mexico this weekend, Norwegian diplomats announced Thursday.

The Norwegian embassy in the Mexican capital indicated on its Twitter account that in Mexico City, the venue for the talks, the parties “will sign a partial agreement on social matters.”

This agreement is aimed at addressing “vital social needs” and public service problems by recovering assets of the Venezuelan State that “are blocked in the international financial system,” explained the head of the Maduro government delegation and president of the National Assembly, Jorge Rodríguez, in a statement posted on his Twitter account.

The funds will be used to strengthen the health system, recover the electrical infrastructure and schools, and care for those affected by the torrential rains that have hit the South American country in recent months, the statement added.

The talks are expected to focus on a humanitarian aid program for Venezuela as well as the conditions for the presidential elections scheduled for 2024.

The resumption of the dialogue will take place almost two weeks after government and opposition delegates met in Paris for a round table to address the Venezuelan crisis promoted by French President Emmanuel Macron.

Rodríguez and Gerardo Blyde, representative of the so-called Unitary Platform, an opposition bloc made up of members of the group that in 2021 tried to dialogue with government representatives in Mexico attended that round table.

Through dialogue, the Maduro government seeks to get all sanctions against his administration and senior officials, including himself, suspended.

The opposition, for its part, said in a statement that it comes to the dialogue “with the urgency and the will to find, once and for all, tangible and real agreements that translate into solutions for the humanitarian crisis”; in particular “the construction of conditions and institutions that guarantee, among other things, free and observable elections.”

The talks – which formally began in September 2021 in Mexico after the signing of a memorandum of understanding a month earlier – have been suspended since October last year when Maduro ordered his delegation to withdraw in protest of the businessman’s extradition to the United States. Alex Saab.

Saab – of Colombian origin and whom the Maduro government appointed as its diplomatic representative and at the last moment included him as a delegate in the talks – was arrested in Cape Verde in June 2020 after making a stopover in that country on his way to Iran to fulfill a humanitarian mission that gave him immunity, according to the Venezuelan authorities.

The Maduro government has incorporated Saab’s wife, Camila Fabri, as a member of the official delegation to the Mexico talks. She added, without giving details, that Fabri will be part of the group while the reinstatement of her husband is resolved. Saab is accused in the United States of having laundered hundreds of millions of dollars from corrupt deals with Maduro.

The initiative, in which Norway participates as a promoter as in the failed attempt in 2019, is seen by many in the international community as a reason for hope to move towards a peaceful and negotiated solution to the political, social and economic crisis in Venezuela.

The United States, among dozens of other countries, recognized Guaidó as interim president after he proclaimed himself as such when he served as head of the National Assembly (2016-2021), arguing that Maduro was reelected in 2018 in fraudulent elections.

International support, one of Guaidó’s main assets, has declined significantly over time.