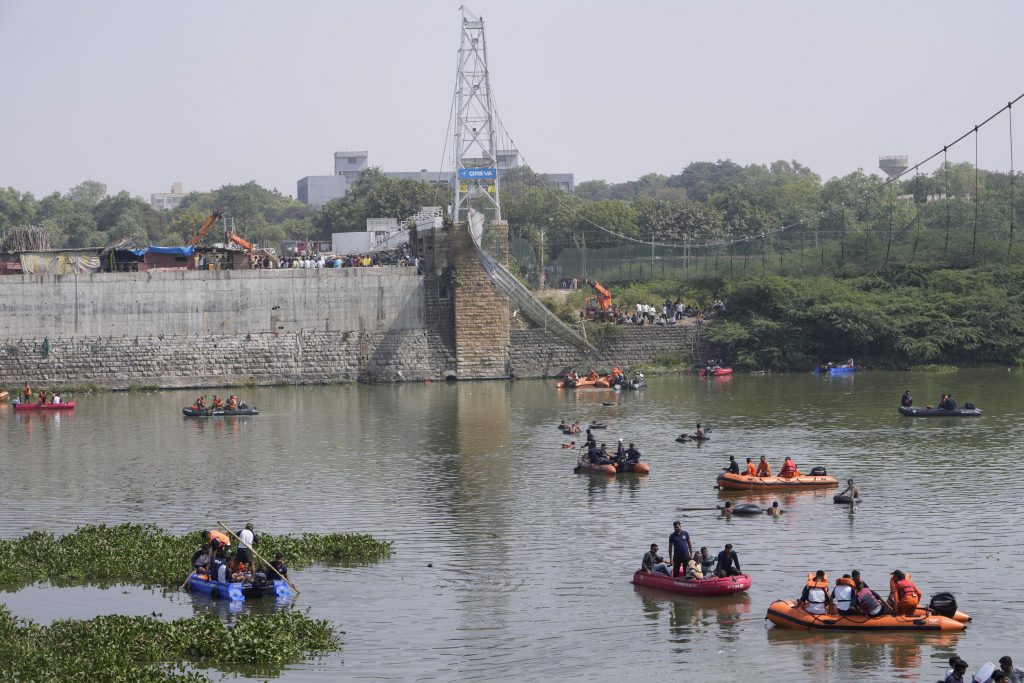 MORBI, India (HPD) — Authorities in India arrested nine people Monday after a bridge collapsed over a river in the country’s west, killing at least 134 people.

The event occurred on Sunday when a 143-year-old bridge gave way under the weight of the crowd in Gujarat state, causing hundreds of people to fall into the Machchu River.

As families mourned their dead, questions were raised about how the bridge, built by British colonialists in the late 19th century and considered “an engineering marvel,” collapsed, and who was responsible.

The bridge was closed for repairs and had only reopened four days earlier.

Inspector General Ashok Yadav said the police had set up a special commission to investigate the incident, and that the detainees included managers from the bridge operator, Oreva Group.

“We will not let the guilty go unpunished, no one will be exempt,” Yadav said.

Gujarat authorities opened a case against Oreva on suspicion of manslaughter, attempted manslaughter and other charges.

In March, the town of Morbi awarded a 15-year contract to maintain and manage the bridge to Oreva, a consortium of companies known mostly for making watches, mosquito nets and electric bicycles. That same month, Oreva closed the bridge for repairs.

The bridge has been repaired several times over the years and many of its sections have been replaced.

The bridge was reopened on October 26, the first day of the Gujarati New Year, which coincides with the Hindu festive season, and the structure attracted hundreds of visitors.

Sandeepsinh Zala, a municipal official in Morbi, told the Indian Express newspaper that the company reopened the bridge without having a “soundness certificate” for the structure. This could not be independently verified, but the state government said the matter is being investigated.

Authorities said the bridge gave way under the weight of the crowd. Videos of the event show the bridge swaying violently and people desperately clinging to cables and railings before the structure collapses and falls into the river.

Photos of the place show the bridge broken in two with the road corridor collapsed, and the cables severed. At least 177 people were pulled from the river and army, air force and navy personnel are searching for others who are still missing, said Jigar Khunt, an official with Gujarat’s intelligence department.

Police said there are 134 confirmed deaths and many others have been admitted to hospitals in critical condition. Rescue teams worked through the night looking for survivors. Minister of State Harsh Sanghvi said that most of the victims are teenagers, women and the elderly.