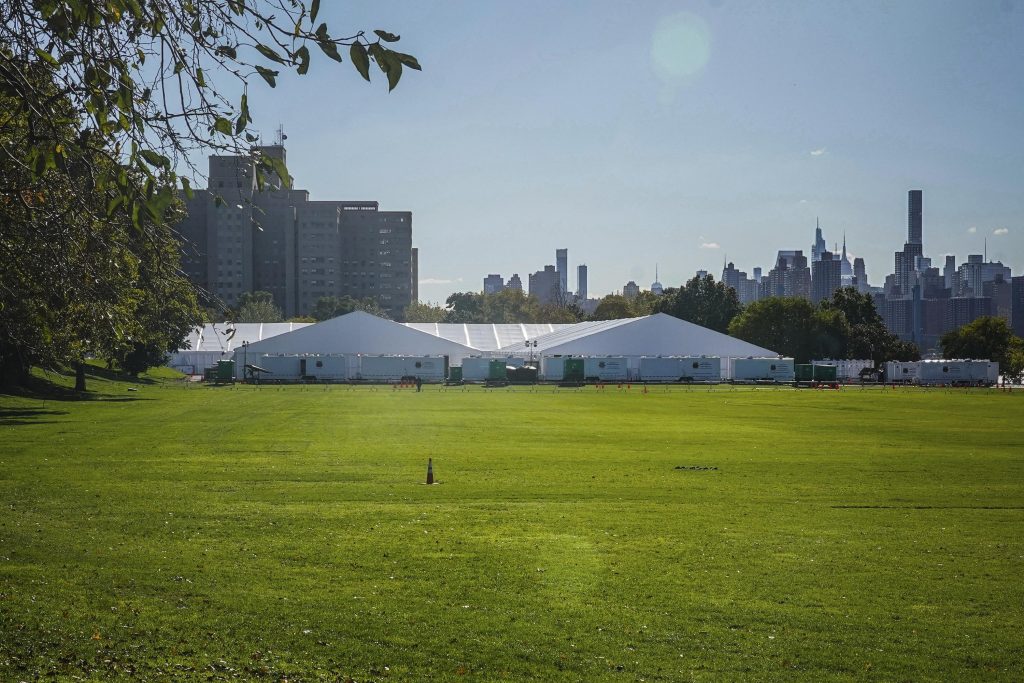 The humanitarian center on Randall’s Island is intended to be a transit point for adult males traveling alone – many from Venezuela – who arrive on buses hired mainly by Texas, and who make the trip several times a week.

Spartan and utilitarian, the tents include cots for up to 500 people, laundry facilities, a dining room and phones for residents to make international calls.

The city’s plan is to bring the unaccompanied men to the scene once they reach Manhattan’s main bus terminal and house them there while they determine their next steps, according to officials. Families with children stay in a hotel.

“We need a different operation that gives us the time and space to welcome people, offer them a hot meal, shower, a place to sleep, understand their medical needs, really work with them to figure out what their next step is going to be. ”, said Commissioner for Emergency Management, Zach Iscol.

The white plastic tents also include a space where migrants can meet with specialized workers to determine their next steps, as well as a recreation area with televisions, video games and board games. In the bedroom space there are rows of green cots, each with a pillow, sheets and a blanket, as well as a few towels. The city said it could double the accommodation capacity of the tents if needed.

In recent months, New York City has seen an unexpected increase in migrants seeking asylum in the United States who were sent from other states such as Texas and Arizona. The phenomenon has put pressure on the city’s shelter system and prompted authorities to look for other places to house people and to propose temporary facilities with tents.

The city’s homeless shelter system is now overflowing with more than 63,300 people. Although there are fewer families in shelters than in pre-pandemic years, the number of single men has skyrocketed since the spring, largely due to the influx of immigrants. On Monday there were more than 20,000 single adults in the system, 23% more than the average number of nights in July.

Mayor Eric Adams declared a state of emergency this month, saying the increased demand on the city was “unsustainable.”

The tents were originally planned to be placed in a remote corner of the Bronx, but the project was moved due to the risk of flooding and criticism from immigrant advocates for the location’s remoteness. Iscol said the site on Randall Island was safe from flooding.

Activists continued to have reservations about the new site and questioned what conditions people would be in and whether they would receive adequate support.

Randall Island is located in the waters between the Bronx, Manhattan, and Queens. Five bridges connect it to all three neighborhoods, and the city’s subway system is just a walk or bus ride away.

It has already been used for various purposes. There are several sports fields on the site, as well as the Icahn Stadium, an athletics venue. There is also a psychiatric hospital and a New York Fire Department academy.