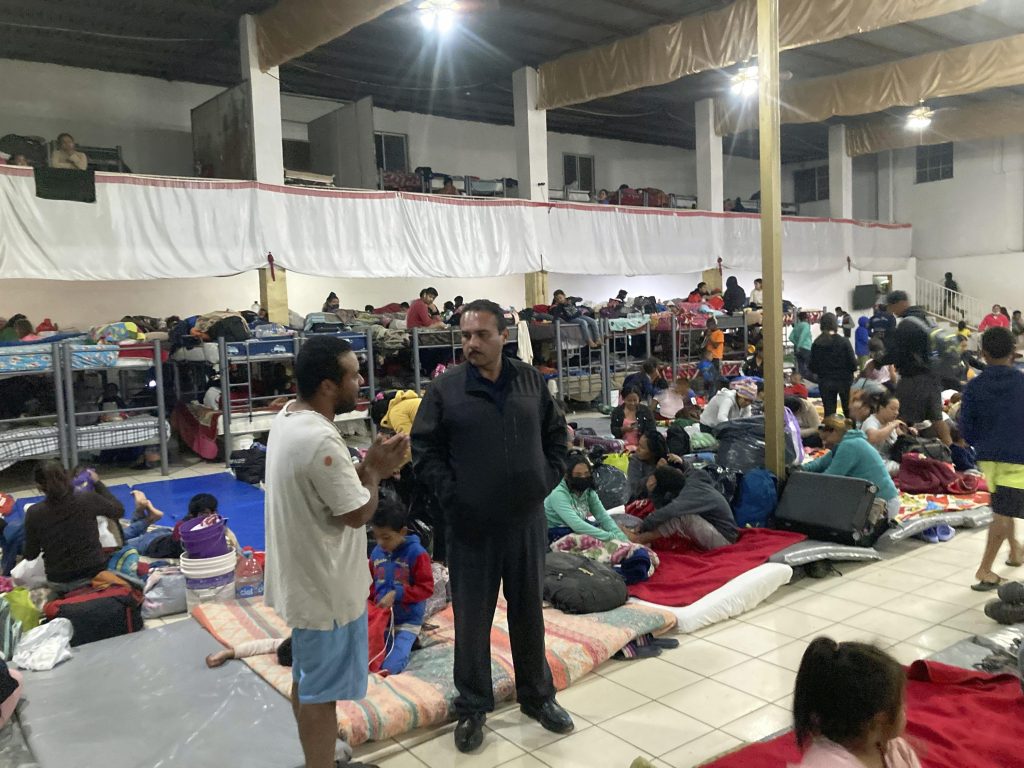 TIJUANA, Mexico (HPD) — “We can’t serve anyone, there’s no room for anyone else.”

José María García Lara answered like this, standing between rows of tents in what looks like a small warehouse, to the director of another shelter for migrants in Tijuana, on the western edge of the border between Mexico and the United States. His interlocutor was looking for space for a group, some of them Venezuelans, who had just been expelled and for whom she had no space.

About 2,000 kilometers to the east, the situation was similar. “We are on the verge of collapse,” said Edgar Rodríguez Izquierdo from Piedras Negras, across the border from Texas.

The new US plan that expands asylum restrictions on Venezuelans poses an added challenge for the already overwhelmed network of border shelters in Mexico, which can barely cope with the growing influx of foreigners.

The Joe Biden administration announced Wednesday that it will accept up to 24,000 Venezuelan migrants who pre-register for the program, have a sponsor in the country and arrive by air. But it will return those who cross the border illegally from Mexico, a figure that exceeded 25,000 people in August alone.

The first Venezuelans returned as part of this plan began to arrive immediately after the announcement through five points on the border, as confirmed by the International Organization for Migration (IOM), the United Nations migration agency.

On the eastern edge, the Casa del Migrante in the violent city of Matamoros received about 120 on its first day, said Father Francisco Gallardo, director of the shelter. The new arrivals joined the hundreds of Central Americans who were already housed there.

The Venezuelan has suddenly become the second largest nationality to arrive at the border with the United States, behind the Mexican. This poses a tough challenge for Biden, who has no relationship with Caracas, making deportations nearly impossible. For this reason, the government generally chose to release them so that they could continue their immigration process in US territory.

Almost four out of five who entered in August did so through the area of ​​Eagle Pass, Texas, in front of Piedras Negras, a city with little reception space.

Rodríguez Izquierdo, a lawyer for the Casa del Migrante there, explained that they are giving out 500 plates of food daily. In the House they can house about 40 people, but a school is being prepared that will be able to accommodate about 150 more.

Along the border there are more than 120 shelters, many of which are expanding their capacity, something that UN agencies will now support more strongly, said Jeremy MacGillivray, deputy head of IOM in Mexico.

Tijuana already has capacity for 4,500 migrants, but the shelters do not stop growing. The largest, the Embajadores de Jesús Temple, where there are 1,400 people on bunks and mats, does so at a dizzying pace in an area of ​​dirt streets that are muddy with the rain and precarious sheet metal constructions. A concrete block building with a kitchen and dining room is nearing completion and the migrants are preparing another area as a soccer field.

“Nobody knows what is really going to happen,” said Gustavo Banda, the church’s pastor.

Uncertainty was the general tone this week at the border, which has already experienced similar situations with the arrival of large caravans in 2018, with the return of asylum seekers to wait in Mexico for progress in their process or with the argument of preventing the spread of the coronavirus during the pandemic, an order known as Title 42.

Faced with the new White House plan, the Mexican government said it will only temporarily admit “some” Venezuelans who are expelled under Title 42, the measure that has returned more than 2.3 million migrants since March 2020.

The final figure will depend on Mexico’s capacity to take them in and the people who join the new program, said an official who spoke on condition of anonymity because he was not authorized to discuss the matter publicly.

In addition to that of its own citizens, until now Mexico had only accepted the return of Guatemalan, Honduran or Salvadoran migrants, who fill the shelters along with Haitians.

The US authorities also did not indicate how many expulsions there could be under the new initiative, but launched a call to avoid irregular entries.

The first returnees complained of being returned even though they arrived in US territory before the announcement, and hundreds of them protested in Matamoros on Friday.

Some were voluntarily transferred from violent border cities into the interior of Mexico, Father Gallardo said.

“It is unfair that they return us if we entered on the 10th and that law came out on the 12th (October),” said Gregori Josué Segovia, 22, who crossed from Ciudad Juárez to El Paso, Texas, and was later transferred some 1,300 kilometers to finish in Matamoros.

“We were three buses, they didn’t tell us anything but we thought it was normal and when we realized it we were on the bridge” bordering Mexico, he explained.

The IOM’s MacGillivray said in an interview with The Associated Press on Friday that, based on discussions with US authorities, people returned this week will have a chance to be chosen in the new program.

The plan is an attempt to manage migratory flows, as happened in the case of the Ukrainians who arrived after the Russian invasion, and although the official considered that it has a positive side, “it is a drop in the ocean” when compared to the seven million Venezuelans who have fled their country in recent years. For this reason, he was confident that after a trial period, Washington would agree to increase the quota.

For Venezuelans in Mexico, their best asset may be a Title 42 waiver for people deemed especially vulnerable.

The border shelters usually register candidates on lists. Embajadores de Jesus, in Tijuana, has a notebook with the names of those who hope to qualify for a Title 42 exemption. Banda, a pastor and director of the shelter, said they wait about three months to cross.

Venezuelans who were already in Mexico before Wednesday are eligible for the program but most were unaware of it. UN agencies prepare a program to inform them of their options.

Many seemed convinced to continue on their way to the border and that is why some 10,000 migrants from a camp set up in the remote town of San Pedro Tapanatepec, in southern Mexico, continued to process their transit permits there to go north, explained the secretary of the city council, Modesto Martínez.

Orlando Sánchez already had it, but he was stranded sleeping for several days in a bus station in Mexico City waiting for money from his relatives to continue. He had heard about the new visa program but buying a plane ticket was unthinkable for him.

Naile Luna was unaware of the new US initiative but was confident that if she crossed illegally and turned herself in, she would not be returned because she was eight months pregnant, so on Friday she continued on her way to the border.