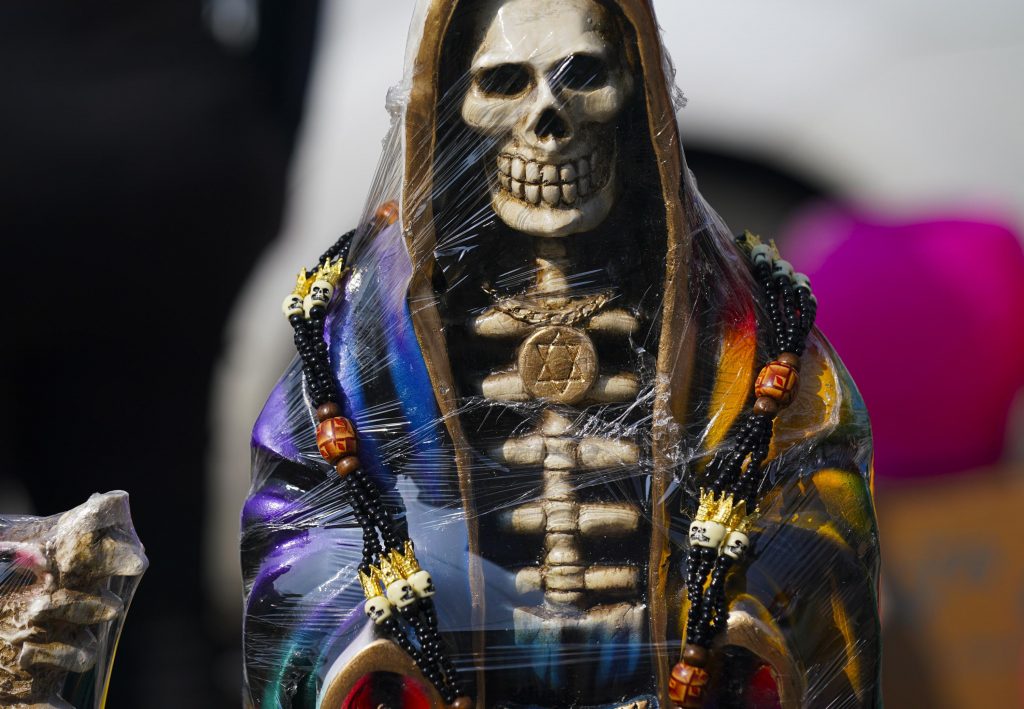 MEXICO CITY (HPD) — Men and women of all ages walk with her in their arms, cradling her close to their chest like a newborn wrapped in colorful blankets or dresses. Some call her “my girl” or “my mother”. For others, she is simply “La Santa”.

Like every first of November, a street in the Tepito neighborhood in the capital of Mexico gathers dozens of believers of Santa Muerte, a figure represented with a skeleton covered with a habit that the Church rejects in this mostly Catholic country.

“It is very miraculous. Many see her badly, but she simply behaves well with the right person,” José Luis Candanosa tells The Associated Press.

The 33-year-old Mexican says that he saw her for the first time during a dream in 2018. In that appearance she was not a figure in bones, but a tall and beautiful woman. She was wearing a long white dress. “I didn’t want to believe in her, but from then on my friends told me ‘she wants to be with you’”.

In the midst of his doubts, one of his acquaintances gave him a figure of “La Santa” and he set up an altar for her in his room. Although there are faithful who place her next to images of saints of the Catholic Church, he only has her and offers her apples, sweets, cigarettes, wine and seeds, so that her abundance is not lacking in her home.

Around José Luis, dozens of Mexicans walk with their “Niña” in their arms or carry her inside a backpack that looks like a mobile altar, because as they move towards the altar where they worship her, it fills with candies, rosaries and bread that believers offer themselves to each other. Some of them also sprinkle her with aguardiente and blow the smoke from a cigar to remove the evils that she absorbs from her when they have her at home. She thus she returns purified, affirms José Luis.

The story of each follower is different. There are those who ask him for health, for a family member to get out of jail soon or for him not to bring sadness. In Mexico he has been linked to drug cartels and it is believed that his followers have grown up on the northern borderwhere migrants, small businessmen and people from the LGBT community have joined his cult.

In the streets of Tepito, she is revered by trans women as well as by parents. There are girls who carry tiny figures of “La Santa” in their handbags, old women who carry her with bouquets of roses and even a mother who does not take her in sight because she is kneeling with her newborn in her arms. .

During a visit to Mexico in 2016, Pope Francis alluded to Santa Muerte and considered it a “chimera” and a “grim symbol” that markets death. However, from Tepito some faithful explain that the Church should not repudiate her, because before coming down to Earth she was part of the kingdom of God.

“She was a divine angel, very pretty. God is the one who gives me life, who lends it to me, and she takes it away from me”, says Mario Alberto Sánchez, 25 years old. “She is represented like this, in a death, because it hurt her to see that God had sent her for all those who had died and it hurt her to see the suffering, the regrets.”

Behind him is his little one and a half year old and both he and his partner come year after year to reiterate their fervor. Near him there are other families. Irvin Altamirano, for example, is a pedicab driver who brought his “Santa” from the south of Mexico City to fulfill the promise he made when he asked for a daughter.

He adds that his devotion grew with the birth of his daughter, but “La Santa” found him when he was about six or seven years old. His father worked all day, his mother was an alcoholic, and somehow his faith saved him. Since then he has had a hard time and she spent time in jail, but “La Santa” keeps him going.

“Every month I bring it. Whether you have money or you don’t have money, I’m here.”

The tattoos on his arms are visible because he is wearing a sleeveless shirt and touching them with both hands he clarifies: “Maybe we see ourselves as a bit of thugs (criminals), but nothing to do with it. Most of us are relaxed and chambeadores”.

He explains that later he will ride his “Santa” on his pedicab to take her to other pilgrimages and continue the celebration. For now, she turns up the music that escapes from a portable speaker that she carries with her while the offerings continue to fall at the feet of her “Niña”, who is more than a meter tall and today wears blue.