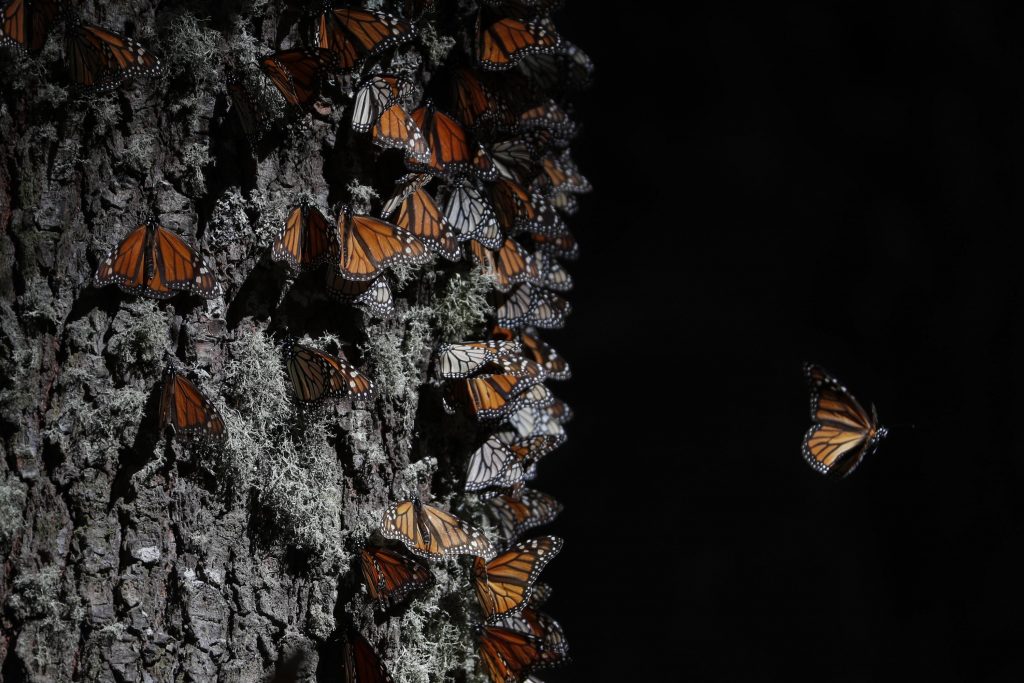 MEXCO CITY (HPD) — Monarch butterflies have begun to appear in the forests of the mountains of central Mexico, where they spend the winter, the Ministry of the Environment and Natural Resources (Semarnat) reported Saturday.

The first butterflies were spotted exploring sanctuaries high in the mountains in the State of Mexico and the state of Michoacán, apparently to decide where they will stay this year.

The Monarchs have arrived with some delay. Normally its arrival coincides with the celebrations for the Day of the Dead on November 1 and 2. Hillside communities have long associated these orange and black butterflies with the return of the souls of the deceased.

In a statement, Semarnat announced “the first records of Monarch butterflies flying over the fir forests in the Sierra Chincua, El Rosario and Cerro Pelón sanctuaries, in the Monarch Butterfly Biosphere Reserve, in Michoacán, and in the forests of the municipality of Atlautla, in the State of Mexico.

The main contingent of butterflies is expected to arrive in the coming weeks, depending on weather conditions, the Secretariat said.

“The migration of the Monarch butterfly is not compared to that of any other insect, in terms of length, regularity, singularity and visibility, for which its conservation is considered a collective international responsibility,” added Semarnat in its statement.

It’s too early to say how big the annual migration of butterflies from the United States and Canada will be this year. Butterflies are usually counted in January once they have established themselves in groups on the branches of fir and pine trees.

This annual count of the butterflies is not used to know their individual number, but the hectares (acres) that they cover in their group.

Last year, 35% more monarch butterflies arrived compared to the previous season. The increase could reflect the butterflies’ ability to adapt to extreme heat or drought by changing the date of their departure from Mexico.

Every year, usually in March, Monarchs migrate back to the United States and Canada.

Drought, severe weather, and habitat loss north of the border—particularly milkweed where monarchs lay their eggs—as well as pesticide and herbicide use, and climate change threaten the species’ emigration . Illegal logging and loss of trees due to disease, drought and storms affect the sanctuaries of the insect in Mexico.

This year, the International Union for Conservation of Nature placed the Monarch butterfly on its “red list” of threatened species and listed it as “endangered” — two levels short of extinction.

The group estimates that the Monarch butterfly population in North America has declined between 22 and 72% over a 10-year period, depending on the method of measurement.

After wintering in Mexico, the butterflies fly north, reproducing multiple generations over thousands of kilometers (miles). The descendants that reach southern Canada undertake the return trip to Mexico in late summer.