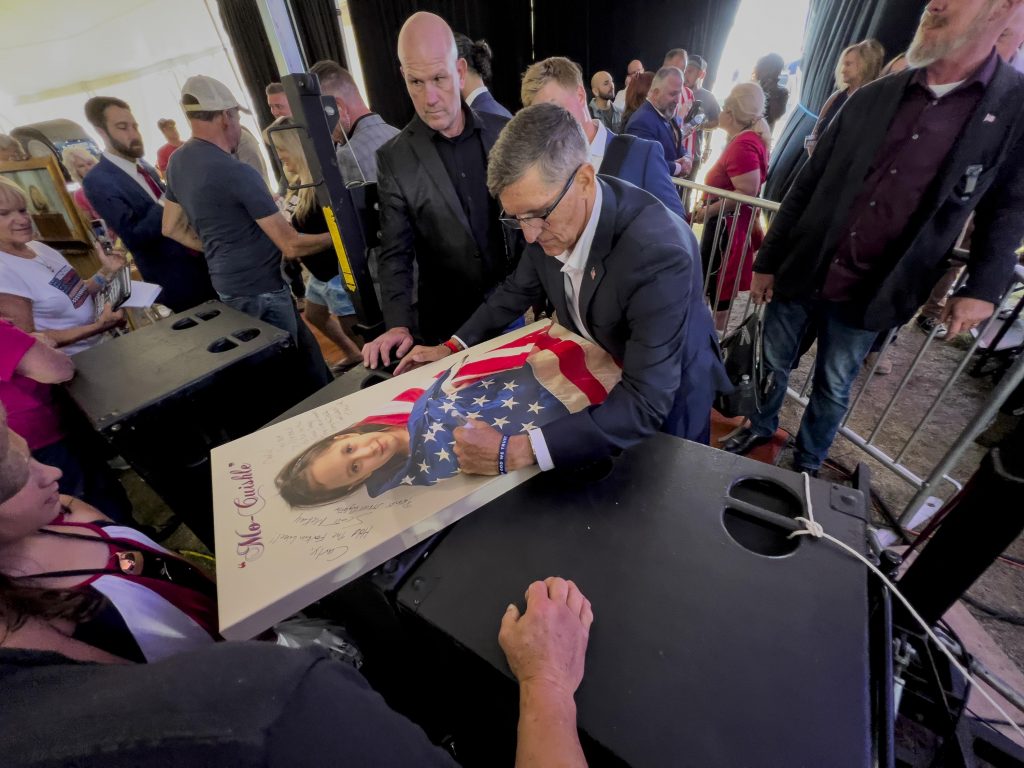 BATAVIA, N.Y. (HPD) — By the time the red, white and blue microphone was finally silenced, some 3,000 people had listened to hours of tirades and protests.

“We are at war,” said one of the individuals who spoke. Another stated that he was willing “to be shot for my country”, while a third maintained that “they hate you because they hate Jesus”. Those present were told that it was time to “put on the armor of God.” Retired three-star Army General Michael Flynn, the event’s big draw, invited people to get baptized.

Crowds of people emerged from the large tent where the event had taken place and walked towards three large metal tubes filled with water. As praise music played, one after another presented themselves to a pastor, who made them dip into the water and welcomed them to the movement in the name of Jesus Christ. One woman wore a T-shirt that said “Army of God.”

Flynn told the crowd that they were in the middle of a “spiritual war,” a “political war,” and encouraged people to join the fray.

The event was part of ReAwaken America, an initiative by Flynn, who was White House national security adviser under the Trump administration, and Oklahoma businessman Clay Clark. Both launched it after the insurrection of January 6, 2021, which unsuccessfully tried to prevent the certification of Joe Biden’s victory in the elections at the end of 2020. Both the attendees and the people who spoke still insist — on against the evidence and dozens of court rulings– that Trump won the election.

Since last year, the ReAwaken America Tour has delivered a message to thousands of people in 15 cities big and small that the nation is under siege. The tour is a kind of traveling show recruiting people for a growing Christian nationalist movement cloaked in the banner of God, patriotism and politics, which wields increasing influence in the Republican Party.

In the version of the country that promotes the movement, Christianity must be the center of life and institutions. But it is under attack and we must fight to restore the nation’s Christian roots. It is a message that the movement repeats ad nauseam and that goes against the concept of pluralist democracy in the constitution. But it is a message that is convincing many people.

A May poll from the University of Maryland found that 61% of Republicans support declaring the United States a Christian nation.

“Christian nationalism undermines and attacks core values ​​of American democracy, such as the promise of religious freedom for all,” said Amanda Tyler, executive director of the Baptist Joint Committee, which advocates religious freedom.

He added that the ReAwake cause is a partisan political cause, spreading disinformation to perpetuate the big lie (that Trump won the election) and get another result next time, in the next election.”

This dispatch is part of an investigation by HPD and Frontline that includes the documentary “Michael Flynn (The Holy War of Michael Flynn), to be released on October 18 on PBS and online.

ReAwaken is a kind of petri dish of Christian nationalism and promotes the idea that there is an ongoing battle between forces of good and evil. The forces of evil include the government and the Democrats.

“It’s a political act on spiritual steroids,” according to Kristin Kobes Du Mez, a history professor at Calvini University in Michigan who studies evangelicals.

ReAwaken often performs in churches with loudspeakers, and its speakers speak to worshipers from the pulpit.

The Batavia show was staged on church grounds after religious and community leaders from neighboring Rochester told them they weren’t welcome.

The lecturers fomented fear and hatred. Immigrants cross the border “to take your place,” said one. Homosexuals and pedophiles are included in the same category, that of sinners who do not honor God. Vaccines that save lives fuel “a genocide.” “The enemy wants to put a muzzle on you,” said another speaker. “He wants to cover your mouth.”

“On this ReAwaken America Tour,” Clark said, “Jesus is king and Donald Trump is our president.”

These ReAwaken events sound a lot like Trump acts. Claims and disdain for government institutions are a constant. Speakers included Trump’s sons Eric and Don Jr.; a great friend of Trump, Roger Stone, and Robert F. Kennedy Jr., who spreads misinformation around vaccines.

At the Batavia event, Eric Trump and other speakers said the search of Donald Trump’s home in Florida for classified documents showed that the government is against its citizens.

“Things from the third world worthy of a Gestapo,” said Trump’s son. After he finished his speech, a group of people prayed with him.

Other speakers promoted wild theories. One said that President John F. Kennedy was assassinated in 1963 because he threatened to expose a plot to enslave men, women and children in the United States. Another argued that a Hebrew prophet predicted 2,500 years ago that the US Supreme Court would strike down the constitutional right to abortion.

ReAwaken’s volatile mix of politics, Christianity and conspiracy theories could give way to political violence, several academics told the HPD.

Samuel Perry, a sociologist at the University of Oklahoma, has done several studies on Christian nationalism. In an August 2021 poll, half of white Americans who expressed a strong identification with Christian nationalism said they believed things were so bad that “true patriots” might have to resort to violence.

“I think all of us feel that the United States is about to disappear,” Clark told the HPD.

Flynn is a constant presence at ReAwaken America events, where he is portrayed as a martyr to the far right, a retired general who paid a heavy price to work for Trump.

An HPD/Frontline investigation published last month indicated that Flynn uses his public appearances to mobilize voters, rally support to forge alliances and build a network of nonprofits to help promote his movement.

It is ironic that Flynn is now presenting himself as a populist warrior. He was the typical “insider” who moved like a fish in water in Washington until Trump fired him in February 2017 for lying about the contacts he had had with the Russians.

Flynn is now on a crusade against the very establishment that employed him for years and gave him access to many of his most precious secrets.

“Now it turns out he’s a spiritual general,” said Anthea Butler, a specialist in American religion and politics at the University of Pennsylvania.

Butler said the way Flynn and ReAwaken conflate Christian nationalism with the idea of ​​spiritual warfare is dangerous because it implies that there are “demonic” people in government and that Christians must act to save the country. “If you start talking about a spiritual war and that you have to take up arms and stuff, then you have to be alarmed,” he said.

Katherine Stewart, author of “The Power Worshippers: Inside the Dangerous Rise of Religious Nationalism,” attended a March 2022 ReAwaken event at a church in San Marcos, California . She said it was like entering “a parallel universe.”

“The leaders of the ReAwaken America tour take people into an echo chamber where facts don’t exist,” he said. “They make them believe that they are doing what is best for the country. But all his good intentions are put at the service of a program that divides the country like never before and that could destroy our democracy.