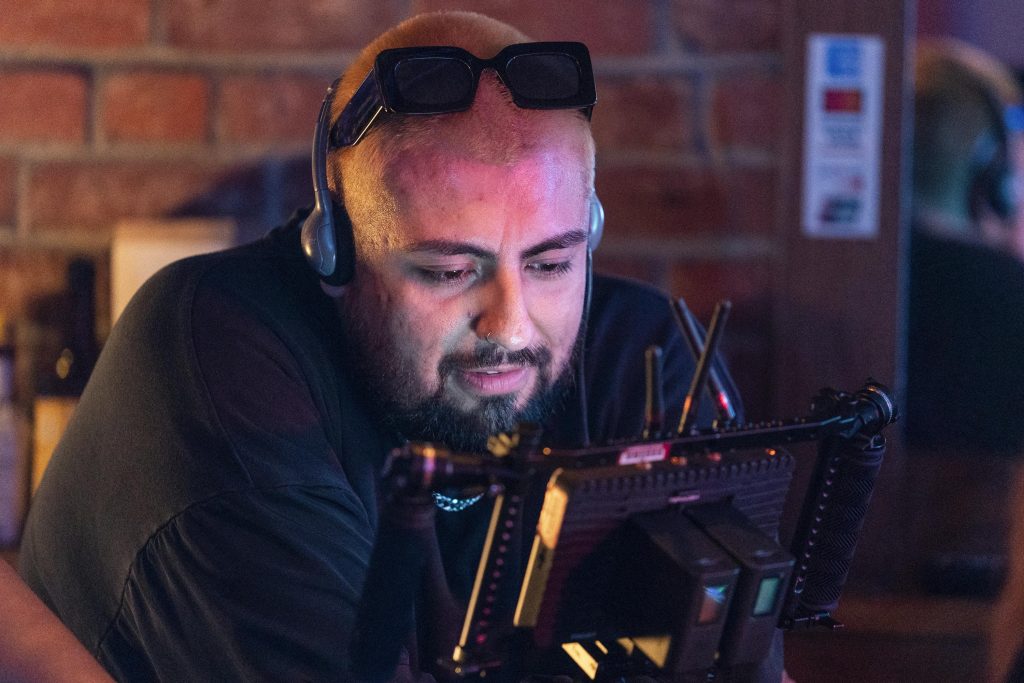 LOS ANGELES (HPD) — Under the golden lights of streetlights, directions come from Jorge Xolalpa’s mouth in either English or Spanish as he walks down the sidewalk with a cameraman at his side.

The actors are not distracted, and the production team places lighting on top of a nearby dumpster to give the scene the glow that the 33-year-old award-winning Mexican filmmaker has etched in his mind. Moments like this are precious to Xolalpa, whose eyes sparkle with emotion as he describes his love of cinema.

Despite his growing fame, Xolalpa, like hundreds of thousands of others, is locked in a years-long battle over whether he can have papers to work legally in the United States. Should the courts end the program known as Deferred Action for Childhood Arrivals (DACA), he said he will find a way to make a living and will not stop making movies. But, he commented, he will suffer from the loss of stability in the country where he grew up and has made his home.

“The biggest thing I would lose would be hope,” he said.

For many of the 600,000 immigrants in this situation, it is not easy to remain hopeful. A US appeals court recently left the program in limbo by returning a lawsuit to a trial court for review. As the country heads into midterm elections that could give Republicans control of Congress, that decision has increased pressure on Democrats to pass legislation to protect these immigrants.

Although the program implemented during the administration of former President Barack Obama has brought educational opportunities, job prospects and benefits such as driver’s licenses and health insurance for immigrants, it has not been possible to achieve long-term security. Texas and other states sued DACA four years ago, and their futures were clouded when US District Judge Andrew Hanen ruled last year that the program was illegal. He allowed it to continue to work for people who were already receiving their benefits, but prevented new applicants from being admitted.

Immigrant advocates appealed the ruling, and the administration of President Joe Biden embarked on a new rulemaking process to make the program more robust. This month, the 5th U.S. Circuit Court of Appeals sent the case back to Hanen to review the new rules, and the judge ordered attorneys to brief him on the regulations, but did not set a timeframe for issuing a decision. The case is expected to end up in the federal Supreme Court.

Facing an uncertain future, Biden and his party will face a growing urgency to craft a more durable solution to DACA in the final weeks of the session before the New Year.

DACA was created in 2012 to protect from deportation young immigrants who were born abroad, but grew up and were educated in the United States, even though they lacked legal immigration status. Shortly after he was elected after a campaign with anti-immigrant stances, President Donald Trump tried to end the program, but the Supreme Court ruled that he did not do it properly and kept DACA intact.

Initially, the program was open to immigrants between the ages of 15 and 30 who were in or had graduated from high school and did not have a criminal record. Many of the original applicants were college students and are now working professionals. Some are parents and even grandparents.

Xolalpa was 9 years old in 1998 when his mother picked him up from school in Mexico and took him on a plane to Los Angeles. He said his mother was running away from her abusive father, and that she was selling toys and T-shirts on the streets of downtown Los Angeles to support them.

Xolalpa, who arrived on a tourist visa that expired when he was still a child, said he feared he would be stuck if he took a similar job. So after finishing high school in suburban Los Angeles, he filed to become an independent contractor and landed a job as a property manager, started a small house cleaning business and went to college.

He wanted to study law and perhaps return to Mexico to run for political office, knowing that he would not be able to do so in the United States. But after seeing the movie “Black Swan”, something clicked in him, he told him, and he knew that he wanted to make movies.

Xolalpa said she initially didn’t sign up for DACA out of fear her family could be deported if she turned over her personal information to immigration authorities. He waited about two years to do it. He said he had more freedom to apply for jobs then, and that the jobs included benefits like health insurance, a retirement savings plan, and the feeling, for the first time, that he was part of the property management company where he worked. .

But that did not remove all the limitations, especially in his work in the cinema. Xolalpa commented that he has had difficulty getting permission to travel abroad, something that can be done with the program, but requires additional paperwork and takes time. He said he missed out on opportunities to attend film festivals abroad and work on a streaming production in Mexico, and he doesn’t want that to be his fate forever.

“They are playing with my life, and that is not right,” he said.

Xolalpa said he made seven movies in seven years and has no plans to stop. She started with an iPhone and a $100 budget, and now she has her own production company, Mighty Aphrodite Pictures, focused on female-themed movies. Last year, her film “Your Iron Lady,” which tells the story of her mother, was considered for a Golden Globe nomination after winning awards at various film festivals.

His most recent film, “Union Station,” is set to premiere next year, and Xolalpa has applied to renew his DACA enrollment after a federal judge ruled the show could continue for now.

However, if his immigration status is not resolved within the next two years, he could go abroad to continue making films. He said he loves this country and the opportunities it has given him, but chronic instability is taking its toll, leaving him with a restless mind after nights filming in a Los Angeles harbor-view neighborhood just blocks from distance.

“I don’t like the word ‘dreamer,’” he said of the term often used to describe DACA participants, which was coined by an earlier legislative proposal to fix youth immigration problems. “We are doers,” she noted.

“We are not victims. We are heroes,” he said. “We are making this nation.”