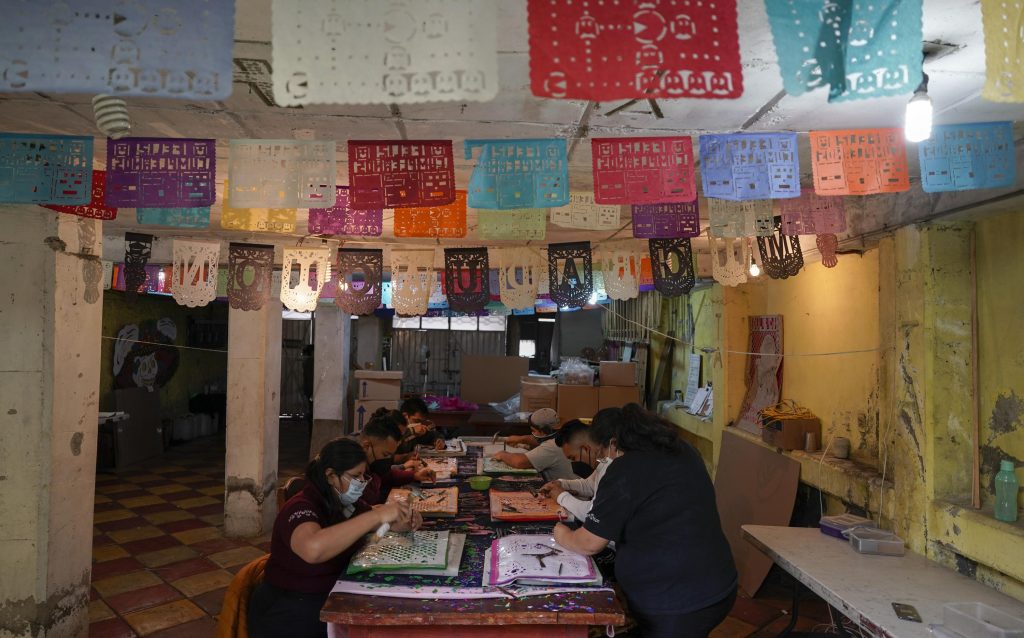 XOCHIMILCO, Mexico (HPD) — Many Mexican artisans are working to preserve the traditional making of papel picado decorations that have long been used on Day of the Dead altars.

In defiance of the increasing use of large-scale production techniques, Yuridia Torres Alfaro, 49, makes her own templates in her family’s workshop in Xochimilco, a rural area on the southern edge of Mexico City.

Just as she has done since she was a child, Torres Alfaro fits razor-sharp chisels to cut thick stacks of tissue paper at her “Papel Picado Xochimilco” business.

While others use more durable plastic sheets, laser cutters, or suajes (dies), Torres Alfaro performs each step by hand, as Mexican artisans have done for 200 years.

“The business started 34 years ago, we were very young and we began to support at work,” Torres Alfaro recalled.

Although china paper came into use in the 19th century, experts say it is likely a continuation of a much older pre-Hispanic tradition of painting ceremonial figures on paper made from bark, known as amate paper. Mexican artisans adopted imported china paper because it was cheap and thin enough to cut through a stack of dozens of sheets at one time, done with care using sharp tools and considerable skill.

But the most important part is the template: its design contains the lines that must be cut out, leaving an intricate network of tissue paper figures that are sometimes hung from buildings or from one side to another in the streets. The most common is that they are placed on top of the altars of the Day of the Dead that Mexican families use to remember and be in communion with their deceased relatives.

Traditionally, the bright colors of the paper used to have different meanings: orange meant mourning, blue was dedicated to those who drowned, yellow to the deceased elderly, and green to those who died young.

But many Mexicans — who also use the decorations at other times of the year, hanging them on the streets at roof height — now prefer to buy them made of plastic because they resist the sun and rain better.

And other producers have tried to use mass-produced dies, meaning thousands of sheets can bear the exact same design.

“The stamps began to emerge to be able to also make papel picado, because there is a lot that has to be done to supply many people,” said Torres Alfaro, who still cuts his own templates by hand with original designs.

“We liked to continue doing it in a traditional way because it gives us the opportunity to make small highly personalized pieces, to continue creating a new design every day; that is what the workshop is really dedicated to,” he added.

Another rival is the American holiday of Halloween, which more or less coincides with the Day of the Dead. Due to its flashy and more marketable character—with costumes, movies, parties, and candy—it has gained popularity in Mexico.

“Well, a long time ago there began to be a little more Halloween,” said Torres Alfaro. “We dedicate ourselves more to the Mexican tradition, that is part of the job: putting things from Mexico on the confetti. We do do some Halloween stuff, but it’s only by request.”

Others have tried to use 21st century technologies, using laser cutters and computer generated designs.

But Torres Alfaro says that concentrating too much on cutting the leaves leaves out the most important part: the delicate weaves that remain on the paper.

“Currently, some laser machines are emerging that also do it, but we have checked (verified) and it is also the same cost, the machine makes hole by hole and they don’t cut as many pieces either,” he said.

“What is the die and the laser machine, because it has its complications, making shredded paper goes from what can be cut and what cannot, that is the magic of shredded paper,” he added.