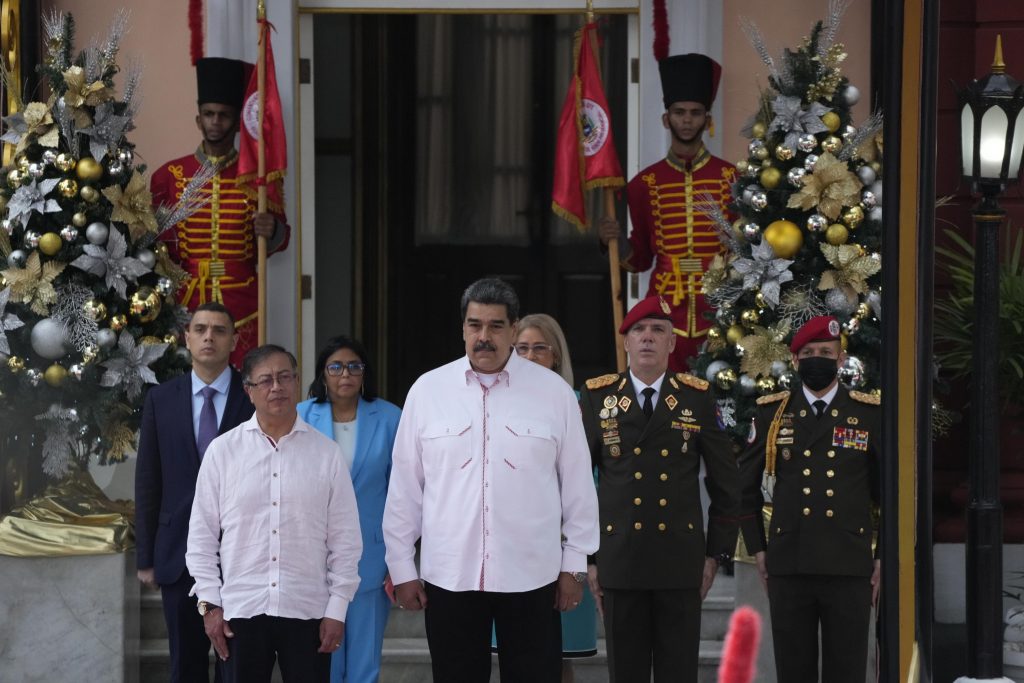 CARACAS (HPD) — Colombian President Gustavo Petro and Venezuelan President Nicolás Maduro open on Tuesday a new stage in the thorny bilateral relationship that for almost two centuries has had frequent incidents between their armed forces and disputes over the sovereignty of territories. that led to the rupture of the diplomatic and commercial link in the last three years.

Petro arrived in Caracas on a Colombian Air Force flight and was received with honors at the presidential palace by Maduro. The two leaders held a private meeting.

Before leaving for Venezuela, Petro told the press in Bogotá that it will be the first meeting between leaders of both nations in six years and that he will try to fill a “political vacuum.”

He added that the agenda will be varied and will include border trade integration, as well as the “dignification of migration” in reference to Venezuelans and Colombians who live in both countries. Colombia is home to 2.4 million Venezuelan migrants who fled due to the political and economic crisis in their country.

The possible re-entry of Venezuela to the Inter-American Human Rights System is also of interest to Colombia. Petro assured that he is interested in the “democratic construction of America” ​​and for that he proposes to strengthen human rights in the region.

The meeting takes place almost two months after Petro, the first left-wing president in Colombian history, came to power. One of his first actions in terms of foreign policy was to recognize Maduro as the legitimate president and forget the harsh friction between the now former Colombian president Iván Duque (2018-2022) and the Caracas government that led to the breaking of official ties. in 2019.

Petro also promoted the reopening of the border on September 26, marking the resumption of commercial relations between the two countries.

Maduro, for his part, has repeatedly expressed that with Petro now the environment is conducive to building a new stage of cooperation and closer ties with Colombia.

Maduro’s previous meeting with a Colombian president was on August 11, 2016 in the city of Puerto Ordaz, southeast of Caracas, when with Juan Manuel Santos he agreed to the gradual reopening of several border crossings that he had ordered closed almost a year earlier after of an attack suffered by three soldiers and a civilian in the Venezuelan border city of San Antonio del Táchira when they were carrying out operations to combat smuggling.

Neither Maduro nor his predecessor and mentor Hugo Chávez, who governed between 1999 and 2013, had a president with ideological affinity in Bogotá before.

“Although there may be some ideological communion between Petro and Maduro, in reality there are many issues that are not going to be processed as quickly, such as the border security strategy and migration,” Ronal Rodríguez, told The Associated Press. researcher at the Venezuelan Observatory of the Universidad del Rosario.

The Maduro government broke relations with Bogotá, arguing that Duque, a right-wing conservative leader, had promoted plans to overthrow him.

Colombia, with Duque at the helm, was one of the countries that recognized opposition leader Juan Guaidó as interim president after he declared himself as such while he was leader of the National Assembly, arguing that Maduro had been re-elected in 2018 in fraudulent elections.

Guaidó, who was recognized as interim president by dozens of countries, rejected the meeting. “President Petro decides to visit the dictator Maduro today and call him ‘president,’ an action that could dangerously normalize human rights violations that point to Maduro as being responsible for the chain of command,” Guaidó wrote on his Twitter account on Tuesday.

Petro also invited Venezuela to be a guarantor country in the efforts to reach a peace agreement with the guerrilla National Liberation Army (ELN), which operates on both sides of the border. Caracas recently welcomed ELN delegates from Cuba, the former venue for the negotiations.

According to human rights organizations and the former Colombian government, the ELN and other Colombian rebel groups have an active presence in Venezuela. Maduro has rejected those accusations.

The resumption of the peace talks with the ELN, which were suspended in January 2019, is part of a more ambitious project of the Petro government called “total peace” with which it seeks to sign agreements or treaties of submission to justice, to exchange of benefits, with armed groups, drug gangs and dissidents of the Revolutionary Armed Forces of Colombia (FARC) that continued to operate after the historic peace agreement signed in 2016 with the Colombian State.

Since August, the governments of Caracas and Bogotá have made contacts to restore military coordination, which for years was essential to control criminal activities in the border region and prevent the involuntary incursion of soldiers from both countries into neighboring territory during security operations. Both countries share a common border of 2,200 kilometers.