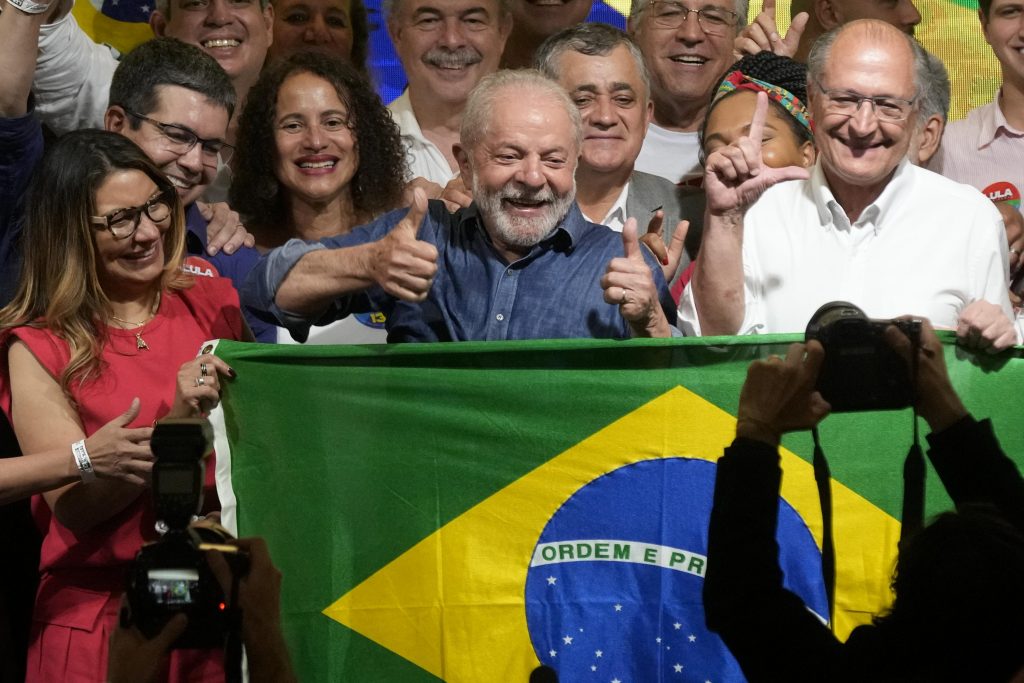 RIO DE JANEIRO (HPD) — Luiz Inacio Lula da Silva has done it again: Twenty years after winning Brazil’s presidency for the first time, the leftist defeated President Jair Bolsonaro on Sunday in an extremely close election that represents a sea change for the country after four years of right-wing policies.

With more than 99% of the votes counted, Lula had 50.9% and Bolsonaro 49.1%, before which the electoral authority said that Lula’s victory was mathematically assured. At approximately 10 p.m., three hours after the results were announced, the lights went out in the presidential palace without Bolsonaro acknowledging defeat or issuing any statement.

Before the elections, the Bolsonaro campaign repeatedly alleged that there was possibly electoral manipulation, although without presenting any basis for it. Such accusations raised fears that he would not accept defeat and would contest the results if he lost.

It’s a stunning return to power for Lula, 77, whose jailing in 2018 for a corruption scandal prevented him from running in that year’s election, clearing the way for a victory for Bolsonaro, a defender of conservative values.

“Today the only winner is the Brazilian people,” Lula declared in a speech at a hotel in downtown Sao Paulo. “This is not a victory for me or for the Workers’ Party, or for the parties that supported me in the campaign. It is the victory of a democratic movement that was formed above political parties, personal interests and ideologies so that democracy would emerge victorious”.

Lula has promised a government that goes beyond his Workers’ Party. He wants to include centrists and even some right-leaning people who voted for him for the first time, and return the country to the prosperity it enjoyed in the past. However, he faces difficulties in achieving this in a highly polarized society in which economic growth is slowing and inflation is rising enormously.

These were the country’s closest elections since it returned to democracy in 1985, and represent the first time that the sitting president has failed to win re-election. The margin of difference between the candidates was only a little over 2 million votes; Previously, the closest contest had been that of 2014, which was decided by a difference of approximately 3.5 million votes.

The inauguration ceremony of Lula’s presidency will take place on January 1. He was already president of Brazil from 2003 to 2010.

Thomas Traumann, an independent political analyst, compared the results to the victory of US President Joe Biden in 2020, noting that Lula inherits an extremely divided nation.

“The enormous challenge that Lula has will be to pacify the country,” he declared. “People are not only polarized on political issues, but also have different values, identity and opinions. What’s more, they don’t care about the values, identities and opinions of the other party.”

Some Latin American leaders quickly expressed their congratulations via Twitter.

Mexican President Andrés Manuel López Obrador stated: “Lula won, blessed people of Brazil. There will be equality and humanism”, and his Chilean counterpart Gabriel Boric declared: “Lula. Happiness!”. For his part, Argentine President Alberto Fernández said: “Congratulations @LulaOficial! Your victory opens a new time for the history of Latin America. A time of hope and future that begins today”.

Biden also congratulated Lula, praising the “free, fair and credible elections” in the country. The European Union issued a congratulatory statement to the new president, and applauded the electoral authority for its efficiency and transparency throughout the campaign.

Bolsonaro was in the lead during the first part of the count, and as soon as Lula passed him, some cars in downtown Sao Paulo began honking their horns. He could hear people in Rio de Janeiro’s Ipanema neighborhood yelling, “It rebounded!”

At Lula’s campaign headquarters in downtown Sao Paulo, those present did not erupt in cheers until the final result was announced, a sign of the tension that was experienced throughout the contest.

“Four years waiting for this,” said Gabriela Souto, one of the few supporters allowed to enter due to heavy security.

Outside Bolsonaro’s home in Rio de Janeiro, where his supporter base was concentrated, a woman on top of a truck uttered a prayer through a loudspeaker, then sang fervently, trying to generate excitement. But supporters, decked out in the yellow and green colors of the flag, barely responded. Many did perk up when the notes of the national anthem were heard and they sang loudly with their hands over their hearts.

For months it looked like Lula would win an easy victory, running a campaign that fueled nostalgia for his presidency, in which Brazil’s economy was booming and government welfare helped tens of millions of people into the middle class.

But while Lula led the first round of voting on Oct. 2 with 48% of the vote, Bolsonaro came in a solid second with 43%, showing opinion polls significantly underestimated his popularity.

The Bolsonaro government has been characterized by incendiary speeches, its testing of democratic institutions, its widely criticized handling of the COVID-19 pandemic, and the worst deforestation of the Amazon rainforest in 15 years. But he has built a devoted supporter base by championing conservative values ​​and portraying himself as a hedge against leftist policies that he says infringe on personal freedoms and produce economic turmoil. And he garnered support in an election year in which the government spent huge amounts.

“We are not facing an opponent, a candidate. We faced the Brazilian state machine put at its service, so that we could not win the elections,” Lula told the crowd in Sao Paulo.

Lula built an extensive social welfare program during his presidency, which helped bring tens of millions of people into the middle class, and presided over an economic boom. At the end of his administration, he had an approval rating of over 80%, before which then US President Barack Obama said that he was “the most popular politician on Earth”.

But he is also remembered for a wide web of corruption during his government that came to light after a series of investigations. Lula’s arrest in 2018 prevented him from participating in that year’s electoral contest against Bolsonaro, a lawmaker at the time who was an outspoken supporter of former US President Donald Trump.

Lula was jailed for 580 days for corruption and money laundering. Subsequently, the Federal Supreme Court annulled his guilty pleas, after determining that the presiding magistrate had acted with bias and colluded with the prosecution. That allowed Lula to run for the presidency of the country for the sixth time.

Carla Bridi contributed to this report from Brasilia.