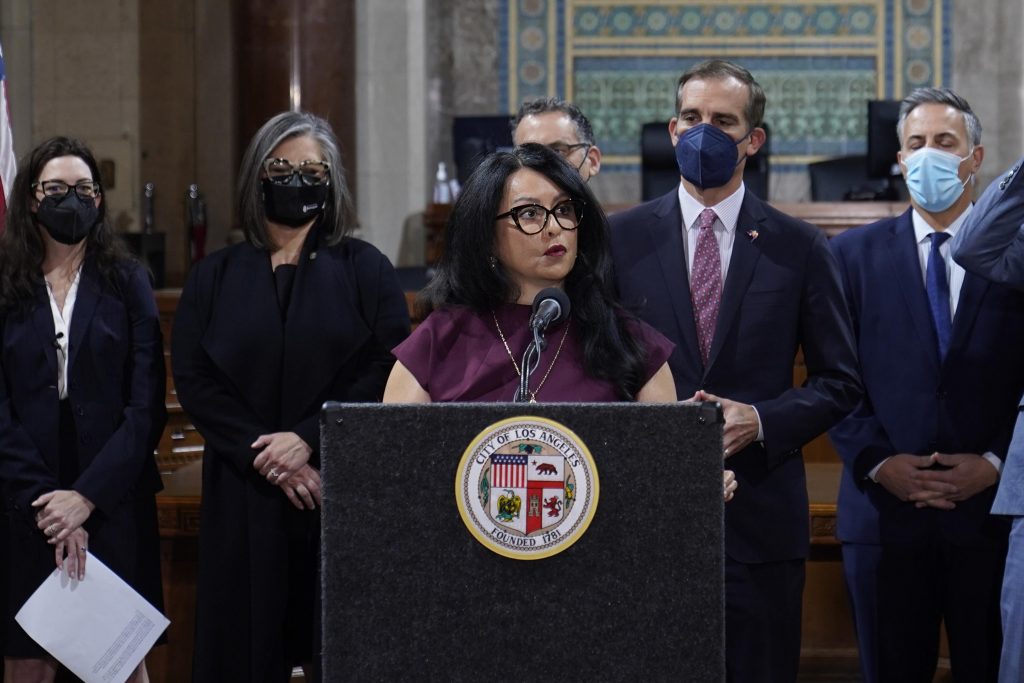 LOS ANGELES (HPD) — A raucous crowd of protesters packed the Los Angeles City Council chambers Tuesday, calling for the resignation of three members who participated in a closed-door meeting that used racist language to describe colleagues — including to a councilman’s son—when they conspired to safeguard Hispanic power in council districts.

The start of the meeting was delayed when protesters shouted for Councilmembers Kevin de Leon and Gil Cedillo to leave the room, while police unsuccessfully called the gathering to sit down.

“Resign now,” protesters shouted, using expletives. “This meeting cannot start. This camera is out of place. Outside!”.

De Leon sat impassively in his seat, eyes downcast, as protesters told him to leave the room. Other councilors asked the crowd to be quiet and allow the meeting to begin and threatened to vacate the room if necessary.

“We don’t want to take it out,” Councilman Mitch O’Farrell said, shortly after the crowd was seated and the meeting began.

Former council speaker Nancy Martinez, a Democrat, left office and apologized Monday, saying she was ashamed for using racist language revealed in a recording from a year ago.

Martinez, however, did not resign as councilman. On Tuesday, she announced that she needed to “take a leave of absence and some time for an honest conversation with my family, my constituents and community leaders.”

He did not participate in the meeting, in which protesters shouted: “Hey, hey, Nury Martinez has to go!” and “What do we want? Justice! When do we want it? Now!”.

The outrage was sparked by a leaked recording of crude, racist comments at a meeting nearly a year ago, which also provided a stark look at racial rivalries on City Hall and fights to gain and retain political power in the city.

Martinez’s controversial words, which include taunts about the black son of a white councilman, came during a private discussion with de Leon, Cedillo and a Hispanic union leader about protecting their agenda during redistricting, a process that it occurs once every 10 years and that it can pit groups against each other in the struggle to gain political advantage in future elections.