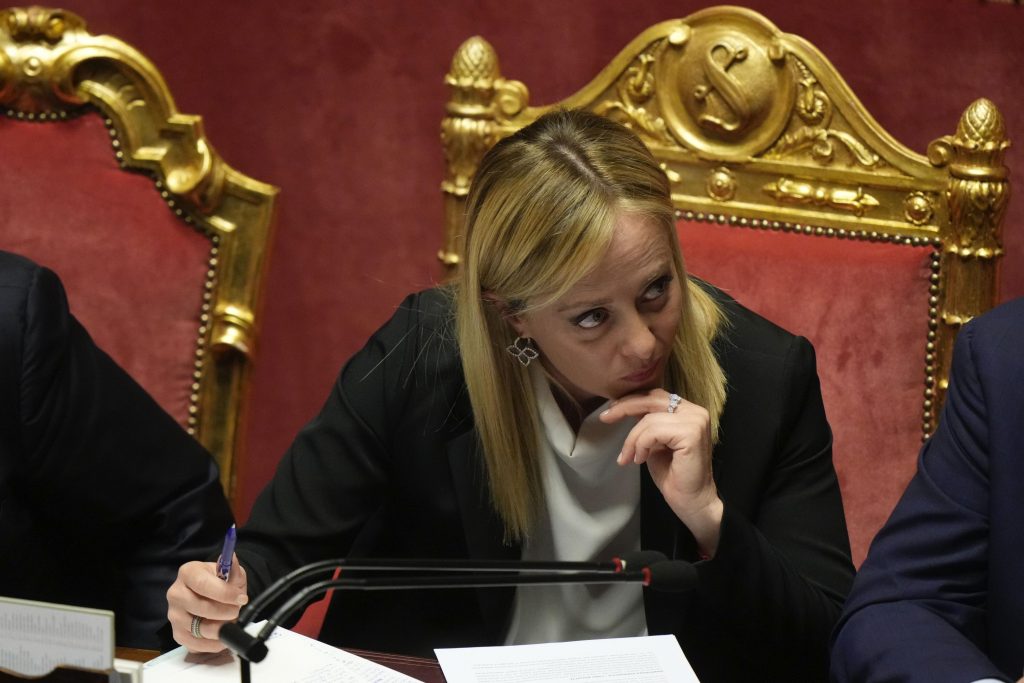 Ahead of the Senate vote, Meloni responded to criticism that his government’s policy objectives — laid out in the lower house on Tuesday — omitted any reference to peace as part of his support for Ukraine and that his economic policies would encourage tax evasion and would jeopardize important funds provided by the EU for the recovery from the COVID-19 pandemic.

On the economic front, Meloni said he would go ahead with plans to remove limits on cash transactions that previous governments had enacted as a measure to fight tax evasion, but which, according to Meloni, were ineffective. And he said it was necessary to reallocate part of the EU funds for post-pandemic recovery because the projects were decided before the war in Ukraine pushed up energy and raw material costs.

Meloni easily won both votes of confidence, beginning with the one in the lower house on Tuesday. In the Senate on Wednesday, 115 voted in favor of his coalition government and 79 against, with five abstentions. Confidence votes are required by the Italian Constitution for new governments.

“To work immediately to respond to the emergencies facing Italy,” Meloni tweeted after the vote.

Meloni was sworn in on Saturday as Italy’s first woman prime minister after her Brothers of Italy party won the most votes in a parliamentary election last month, receiving 26% of the vote. She governs in alliance with the leader of the anti-immigration League party, Matteo Salvini, and former conservative Prime Minister Silvio Berlusconi.

Meloni bristled at criticism that his political references to Italy’s support for Ukraine did not include the word peace.

“If anyone thinks this means I like war, no. But you have to understand how you get to peace… You don’t get to peace by waving a rainbow flag at a demonstration. It’s hard to achieve peace that way,” Meloni told the Senate.

He reiterated his decision to support Ukraine in its defense against Russian aggression, comparing it to his support for the principle of self-defense against domestic intruders. And he pointed out that supporting Ukraine was also essential for Italy’s legitimacy on the international stage.

Meloni concluded with a call to the opposition not to hinder his government for ideological reasons, but to vote based on the content of the policies.

“Don’t keep criticism, I don’t expect that, it would be a mistake. I believe in the merits of the opposition, but what I ask is that we talk about the merits, not that we create ideological debates,” Meloni pointed out.