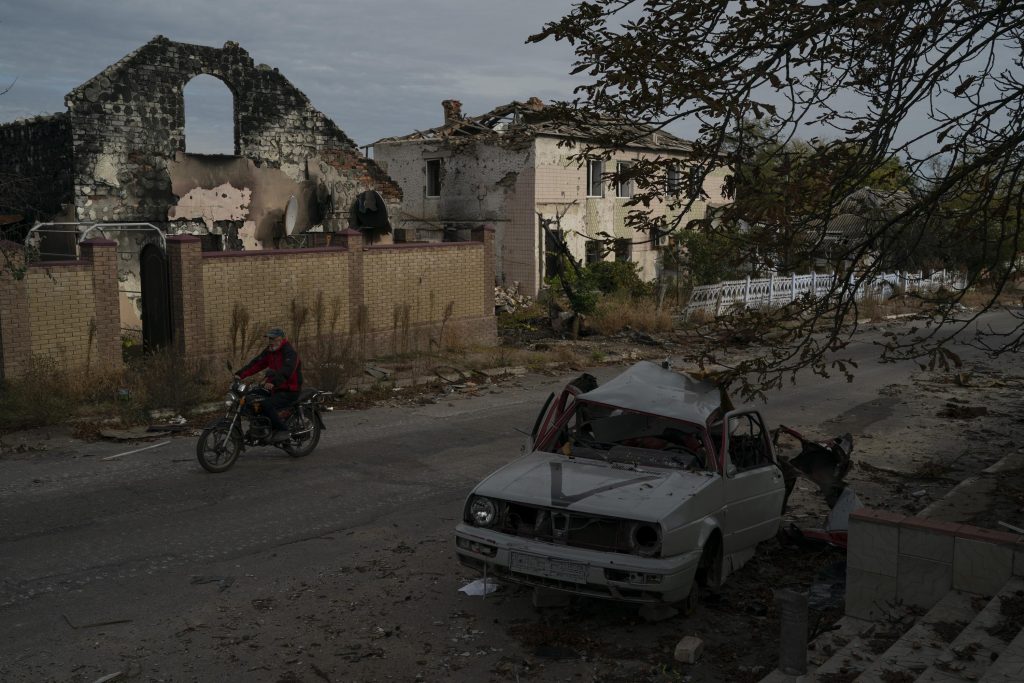 kyiv, Ukraine (HPD) — Ukraine’s capital region was attacked by Iranian-made kamikaze drones early Thursday, with rescuers rushing to the area as residents woke to the sound of air-raid sirens for the fourth morning in a row after of the massive and deadly Russian assault on the entire country on Monday.

According to the governor of the kyiv region, Oleksiy Kuleba, the attacks occurred in an area near the capital. It was not immediately clear whether those incidents left any casualties, but Ukrainian officials reported 13 deaths and 37 injuries in Russian strikes in the nation over the past 24 hours.

“Critical infrastructure facilities” were hit in the incident, the deputy head of the Ukrainian presidential office, Kyrylo Tymoshenko, said on Telegram, without offering further details.

In the southern city of Mykolaiv, overnight attacks destroyed a five-story apartment building as fighting on the country’s southern front lines continued.

An 11-year-old boy was rescued from the rubble, where he spent six hours, the governor of the eponymous region, Vitali Kim, said, adding that rescuers were looking for seven other people on Thursday morning.

The building was hit by an S-300 missile, which although it is usually used against military aircraft, the Russians would have been using them more and more in imprecise ground attacks, he said.

On the southern front, such early morning operations have become a daily occurrence as kyiv forces maintain their counteroffensive to recapture Russian-occupied territory.

Attacks on kyiv were rare until the capital was hit at least four times during Monday’s massive offensive that left at least 19 dead and more than 100 wounded across the country.

Western leaders pledged this week to send more weapons to Ukraine, including air defense systems and weapons that kyiv has said are crucial to defeating Moscow’s forces.

Britain said on Thursday it would provide missiles for NASAM advanced anti-aircraft systems that the Pentagon plans to send to Ukraine in the coming weeks. As part of the aid, it will send hundreds of aerial drones to gather information and provide logistical support, in addition to 18 more howitzer artillery guns.

“These weapons will help Ukraine defend its skies from attack and strengthen its overall missile defense alongside US NASAMS,” British Defense Secretary Ben Wallace said.

The systems, which kyiv has long hoped for, will offer medium- and long-range defense against missile attacks.

The Ukrainian military said this week that, with its current air defenses, it has shot down dozens of Russian missiles and Shahed-136 drones, the so-called kamikaze drones that are playing an increasingly deadly role in the conflict.

kyiv’s air force command said Thursday that its defenses shot down six Iranian drones over the Odessa and Mykolaiv regions the night before. Ukrainian officials said Iranian instructors based in Moscow-occupied Ukrainian provinces have been training Russians to operate the drones.