Skip to content
Home » In Asia, Biden will try to boost US leadership 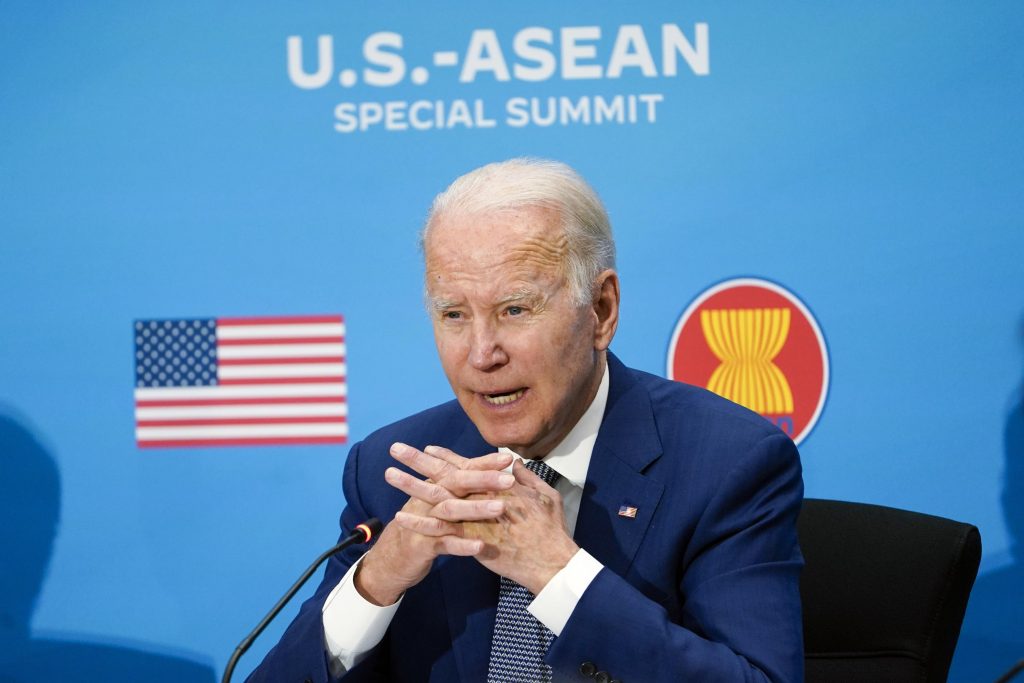 WASHINGTON (HPD) — President Joe Biden will try to bolster American leadership on his trip to Southeast Asia, which will be overshadowed by Tuesday’s midterm elections.

The foreign policy challenges that have defined the first two years of Biden’s presidency — Russia’s invasion of Ukraine and China’s growing geopolitical influence — will be on display at two summits in the region. Biden is preparing for the possibility of a face-to-face summit with Chinese leader Xi Jinping, who last month won a third term as leader of the Chinese Communist Party.

Biden will also deal with global economic problems at a summit of the Group of 20, an annual meeting of the 20 largest economies on the planet. He will also try to promise the Association of Southeast Asian Nations that the United States is committed to the region at a time when China is increasing its influence there.

The ASEAN summit will be in Phnom Penh, Cambodia, while the G20 will be in Bali, Indonesia.

Before that, Biden will be in Sharm el-Sheikh, Egypt, for the UN climate conference known as COP27. Unlike last year’s conclave in Glasgow, Scotland, this year Biden will go with achievements under his arm: the law signed in August that constitutes the largest investment in US history in efforts to combat climate change.

Here’s a look at the dominant themes during Biden’s trip. The first stop will be in Egypt on Friday.

KEEP THE PRESSURE ON RUSSIA

More than eight months have passed since Russia began its invasion of Ukraine, and Biden faces new challenges in his efforts to isolate Moscow. High food and fuel prices and shortages in Europe just as winter approaches are testing the global commitment to support Ukraine and punish Russia for its aggression.

At the G20 summit, Biden will have the opportunity to meet with two important partners in such efforts: British Prime Minister Rishi Sunak and Italian Prime Minister Giorgia Meloni.

Sunak, who took office last month after Liz Truss’ brief tenure, has vowed to maintain the tough policy on Russia that his two immediate predecessors have followed. He and Biden are scheduled to meet to work out strategies to strengthen Ukraine’s defenses in the long term.

Meloni has promised to continue providing weapons and assistance to Ukraine, although doubts remain as she leads a far-right coalition.

Russian President Vladimir Putin has not said whether he will participate in the meeting. Biden has said that she has no plans to meet with Putin, but she has left the possibility open in case the Russian leader wishes to discuss the release of Americans imprisoned in Russia.

US officials have been coordinating with foreign counterparts to isolate Putin in case Putin decides to participate, either in person or virtually. They have talked about the possibility of boycotts or other forms of condemnation.

STAND UP WITH AUTOCRATS

Biden has spoken of the current global standoff between democracies and authoritarian regimes. But lately he has been relying on autocratic rulers to advance US interests, such as Egyptian leader Abdel Fatta El-Sisi, who is hosting the climate conference, and Prime Minister Narendra Modi, who has resisted US calls to cut back on oil purchases. Russian oil.

Biden used his speech at the United Nations in September to underscore that the United States was willing to work with all nations – regardless of their systems of government – to bring about change.

“The Charter of the United Nations was not only signed by the world’s democracies, but was negotiated between citizens of dozens of nations with very different histories and ideologies, united in their commitment to work for peace,” Biden said at the time. .

The government says Biden has no plans to meet Saudi Crown Prince Mohammed bin Salman after the OPEC cartel embarrassed Biden by cutting production months after his July meeting with the crown prince. Biden has criticized the move for signaling that Saudi Arabia was siding with Russia.

American voters will deliver a verdict on Tuesday on the Biden administration and two years of Democratic control of Washington. It is not clear how quickly control of the House of Representatives and the Senate will be known after election day. The White House has repeatedly tried to frame the election as a duel between democracy and extremism, rather than a referendum on Biden’s time in office.

Democrats are privately preparing to lose control of at least the House of Representatives. A large number of Senate races that could tilt power in the House 50-50 are considered a tie. Depending on the results, Biden could embark on his trip abroad significantly weakened politically.

The strongest foreign impact of Tuesday’s results in the United States could be the future of aid to Ukraine. Although aid support has been broadly bipartisan, conservatives have increasingly expressed skepticism about the wisdom of continuing support, as has California Rep. Kevin McCarthy, the Republican leader who is poised to become Speaker of the House of Representatives if Republicans win that chamber.

However, some observers believe that the outcome of the midterm elections, regardless of the trial, will not have a significant impact on Biden’s maneuvers abroad.

“These issues tend to transcend politics,” said Ash Jain of the Atlantic Council, pointing to congressional support for Ukraine and the strengthening of US competition with China. “Biden’s conversations with leaders on these issues will be largely unaffected by the outcome of the election.”

A MEETING WITH XI?

US and Chinese officials are working out the logistics of such a meeting between the two leaders, which would be the first in person during Biden’s presidency. It could come at a time when Biden may have been politically chastised by American voters as Xi consolidated his power during the Communist Party congress that concluded last month.

If a meeting does take place, there will be no shortage of issues that Biden can raise with China, which the US government says is now its most powerful military and economic rival.

Tensions between the two nations have increased over Taiwan, especially after House Speaker Nancy Pelosi’s visit to the self-governing island in August, and Biden’s repeated comments that the United States would defend militarily to Taiwan if attacked by China, comments his aides have repeatedly retracted.

The issue of Trump-era trade sanctions on Chinese goods is also still on the table. Biden is also likely to raise the issue of human rights abuses, particularly against Uyghurs and other Muslim-majority minorities in the Xinjiang region. China has also refrained from publicly blaming Russia for the Ukraine situation, though Putin said Xi privately conveyed “his concerns and questions” about the invasion to him when the two met in Uzbekistan in September.

John Kirby, a spokesman for the National Security Council, stressed on Friday that the US government has never asked other countries to effectively choose between it and China, recognizing that each nation can establish relations based on its own interests.

But “it is not going to change the fact that we continue to want to make sure that we are in the best possible position to compete strategically with China and to deal with the threats and challenges that China represents in a very physical and tangible way, especially in the Indus region. “Pacific,” Kirby added.

THE MOMENTUM TO THE FIGHT AGAINST CLIMATE CHANGE

At the climate conference, Biden will highlight one of his biggest national successes: the huge Democratic healthcare and climate change bill known as the Reducing Inflation Act.

The US commitment to spend some $375 billion over a decade to fight climate change gives Biden greater leverage to pressure other countries to meet their commitments to cut greenhouse gas emissions. and transition the world economy to cleaner energy sources.

Biden will be in a very different position from last year’s meeting, which came during a particularly unhappy stretch in the bill’s winding road to passage.

That summit led to additional global commitments to meet temperature targets agreed to in the Paris Climate Agreement, which Biden rejoined after then-President Donald Trump withdrew the United States from the deal. But even with the new US law, the United States and the world have a long way to go to meet emissions targets to reduce global warming. And the political will to invest more – as the global economy faces new headwinds – is shrinking.

“There is a real gap in the reality of public policy versus the ambition that was sealed in Glasgow,” said Joseph Majkut, director of the Energy Security and Climate Change Program at the Center for Strategic and International Studies.

The global rush to move away from fossil fuels has been tempered by the turmoil in world energy markets following the Russian invasion of Ukraine. Biden is pressuring oil and gas producers to increase production to meet demand and lower prices that have financed the Kremlin’s war effort.

Prospects for a significant breakthrough are even slimmer as major emitters such as China and India are sending lower-ranking delegations. Officials in the Biden administration have attempted to downgrade expectations for outcomes at the meeting and instead cast it as a return to US leadership on this issue.