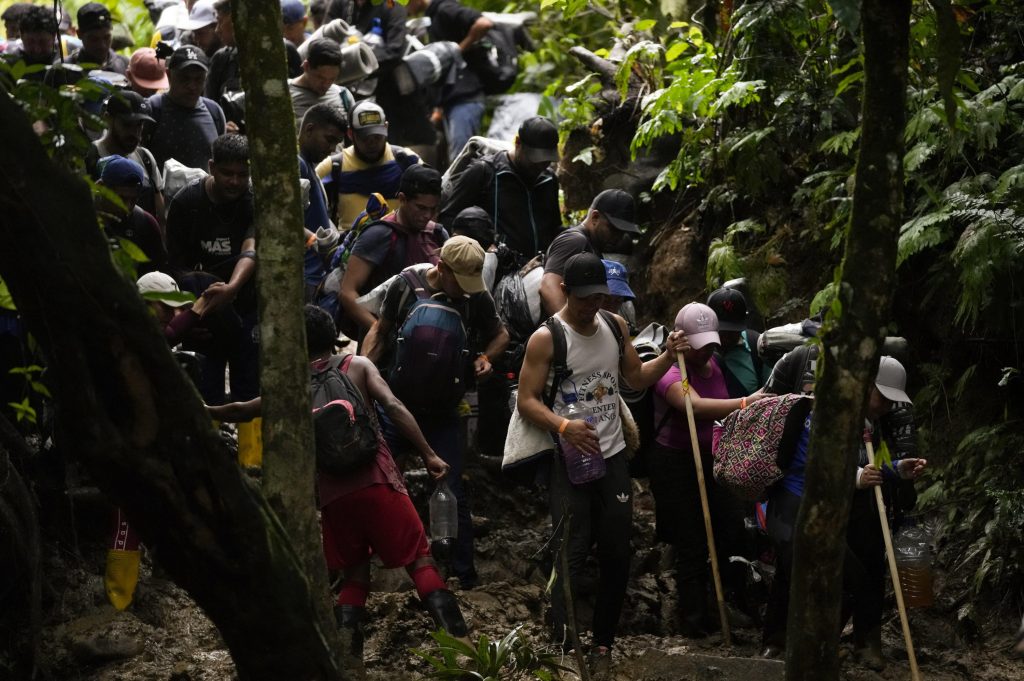 ACANDÍ, Colombia (HPD) — On the threshold of the dangerous jungle of Darién, there is optimism. Some eight hundred migrants, mostly Venezuelans, applaud before beginning the journey in what will be one of the few moments of joy they will have on their journey through the jungle that connects Colombia with Panama.

Andrés Rodríguez remembers that his trip began 11 days ago in Lima, where he first migrated from his native Apure, in Venezuela.

“This trip is for the future of my children and for the family as well,” the Venezuelan told The Associated Press, who accompanied the migrants over the weekend in the first kilometers of the Darién road on the Colombian side.

The hope is stronger than the fear they feel knowing that it is possible that after risking their lives in the jungle and arriving in Panama, their attempt to fulfill the so-called “American dream” could fail.

A few hours earlier, the United States announced a conditional humanitarian permit for 24,000 Venezuelan migrants who are supported in that country by a financial sponsor and enter by air.

Those who do not comply and attempt the land border could be returned to Mexico under the public health law known as Title 42, under which they do not have the right to request asylum, and which was implemented with the argument of preventing the spread of COVID-19.

The sun is just rising in Acandí, a town on the Colombian side that connects with the jungle, and the migrants are ready: they carry tents, several liters of water, flashlights, rubber boots, canned food and some cars or chargers for their children. . There are dozens of children, some just months old.

Quickly, the jungle becomes dense and humid. The terrain is getting muddier as the walkers progress. After hours of walking, a girl loses her balance when she crosses in the mud and falls. Her father holds her and asks her to get up quickly, while she cries. Losing the rhythm of the walk is a constant fear, because falling behind could mean getting lost and spending more nights in the jungle in the midst of wild animals or outlaw groups.

Taking a break by a river, Rodríguez retains his strength, although he looks tired. “The main thing is that God give us health, strength and get to Panama,” he says.

The Darién has become the clandestine route for migrants seeking to reach the north of the continent in the last decade. In 2021 there were tens of thousands of Haitian migrants crossing the jungleHowever, now the nationality has changed and it is the Venezuelans who take the greatest risk. As of September 2022, more than 151,000 people have crossed the jungle and the majority —107,600— are Venezuelans, surpassing the flow of the previous year with a total of 133,700 migrants, according to official figures from Panama.

Several Venezuelan migrants the HPD spoke with on the Colombian side of the Darién recounted coming from countries including Ecuador, Peru, Chile, Colombia and Venezuela. The Venezuelan exodus, which began in 2015 due to the social and economic crisis in their country, already totals 7.1 million migrants around the world and most of them take refuge in Latin American and Caribbean countries.

Migrants seek to improve their living conditions, given that they have not achieved a place to live with dignity in Latin America, in countries with their own internal problems and high levels of inequality, Marianne Menjivar, director for the Response to the Crisis in Venezuela, explained to the HPD. of the International Rescue Committee (IRC).

For Menjivar it is a host of reasons that push migrants to continue their pilgrimage. Thus, the negative economic effects of COVID-19 converge, which exhausted the few resources with which they survived in host countries, often with informal jobs, as well as the overwhelmed public health or education systems that were congested due to the pandemic, hindering access to migrants.

Elwin Primero, a Venezuelan merchant, took the risk of crossing the Darién because of the economic crisis in his country. “The company collapsed,” lamented Primero, who was traveling with his family, and blamed the “bad government of (Nicolás) Maduro” for his fate.

Menjivar warns that as long as the international community “does not support the receiving societies to the extent of the need that exists,” the migration of Venezuelans will continue to increase, generating “greater instability.”

The decision of the US government took by surprise thousands of migrants who were enlisting in Necoclí, on the Colombian side, to cross by boat to the Darién entrance. Some like Cristian Casamayor, 27, reconsidered his decision. “Then they cross us out on our passport and we can no longer enter the United States,” he told the HPD on Thursday after getting off a boat.

However, for some migrants it is a point of no return, because they sold all their belongings to undertake the journey and in Venezuela they have nothing left.

In the Darién, a natural wall between South and Central America where the Pan-American highway is interrupted, dangers lurk and migrants face a lawless jungle with the presence of illegal armed groups, where they are victims of robbery, sexual assault and human trafficking. migrants.

Despite all the dangers, in the middle of the jungle hangs a sign hanging from a tree that seems to encourage daring travelers: “Triumph does not make you grow, it is failure that makes you great.”

But the migrants do not go on an adventure, they risk one of the most dangerous jungles in the world. In 2022, the Panamanian authorities confirmed the death of 19 people, including a Venezuelan minor, while in 2021 the figure rose to 51 people dead or missing.

Associated Press reporters Astrid Suárez in Bogotá and Juan Zamorano in Panama contributed to this report.