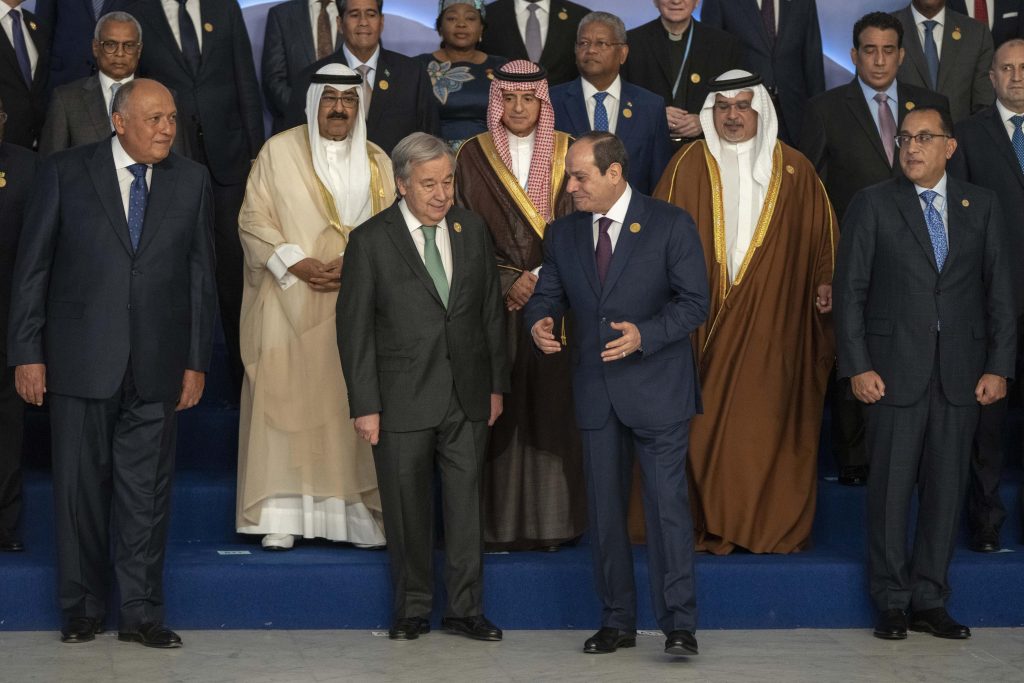 SHARM EL SHEIKH, Egypt (HPD) — The only way to “end all this suffering” from “a highway to climate hell” is for the world to cooperate or perish, the United Nations chief warned dozens of leaders Monday. gathered for an international climate summit.

More than 100 leaders were scheduled to speak in the coming days on how to deal with a worsening situation that scientists describe as Earth’s greatest challenge. Nearly 50 heads of state or government began to take the podium on Monday, on the first day of “high-level” talks at this edition of the annual United Nations climate summit, known as COP27.

Much of the interest will be on leaders recounting examples of devastation caused by weather disasters, especially Pakistani Prime Minister Muhammad Sharif’s speech on Tuesday. Summer flooding in your country caused at least $40 billion in damage and displaced millions of people.

“The planet has become a world of suffering … it is time to put an end to all this suffering,” said Egyptian President Abdul Fatah el Sisi, host of the meeting. “Climate change will never stop without our intervention… Our time here is limited and we must use every second we have.”

El Sisi, who called for an end to Russia’s war in Ukraine, was mild compared to the forceful United Nations Secretary-General António Guterres, who said the world is “on a highway to climate hell.”

Guterres called for a new pact between rich and poor countries to work more closely together, with financial help and an abandonment of coal in rich countries by 2030 and elsewhere by 2040. He called on the United States and China, the two biggest emitters that change the climate, that they work together especially on climate matters, something they did until a few years ago.

“Humanity has a choice to make: cooperate or perish,” Guterres said. “It is either a Climate Solidarity Pact or a Collective Suicide Pact.”

However, the pressure could be less effective than in previous meetings, due to calendar problems and those who will not attend, will be late or face the appointment with reservations.

Most of the leaders met on Monday and Tuesday, just as the United States was holding potentially momentous parliamentary elections. Afterwards, the leaders of the 20 richest nations will have their influential meeting in Bali, Indonesia, a few days later. Added to that, “there are big climate summits and small climate summits, and this was never expected to be a big one,” said Climate Advisers CEO Nigel Purvis, a former US negotiator.

It appeared that the leaders of two of the top three carbon emitting nations – China and India – would not attend the talks, although they did send lower-ranking delegates. The leader of the other big polluter – US President Joe Biden – would arrive days after most other presidents and prime ministers, on a stopover en route to Bali.

Initially, British Prime Minister Rishi Sunak was not going to attend the negotiations, but public pressure and plans by former British President Boris Johnson to attend changed his mind. The new King Carlos III, a veteran defender of the environment, will not attend due to his new role as monarch. And Russian President Vladimir Putin, whose invasion of Ukraine triggered energy chaos with consequences for climate negotiations, will not attend.

“We always want more (leaders),” United Nations climate chief Simon Stiell told a news conference on Sunday. “But I think right now there are enough (presidents) for us to have a very productive result.”

In addition to speeches by the leaders, the talks include “groundbreaking” roundtable discussions that “we’re sure will generate some very powerful input,” Stiell said.

Those who turned out in large numbers were the leaders of the host continent, Africa.

“The historical pollutants that caused climate change are missing,” said Mohammed Adow of Power Shift Africa. “Africa is the least responsible, the most vulnerable to the problem of climate change and it is the continent that is rising up and showing leadership.”

“The South shows its face,” Adow told The Associated Press. “The North, historical cause of the problem, fails”.