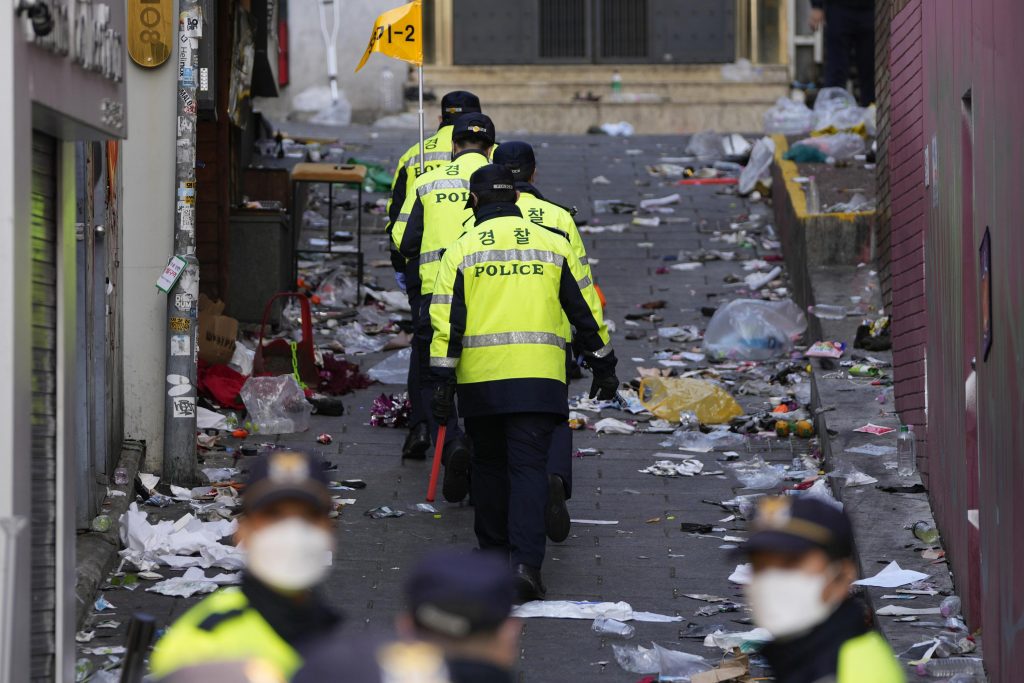 SEOUL (HPD) — Worried relatives rushed to hospitals Sunday to search for their loved ones as South Korea mourned at least 153 dead, most of them teenagers or 20-somethings who were trapped and crushed in a stampede in a narrow alley. from an entertainment district in Seoul where a large crowd had gathered to celebrate Halloween.

Witnesses said the surge of people in the Itaewon area on Saturday caused “hellish” chaos with people falling on top of each other “like dominoes.” Some people were bleeding from the nose and mouth while receiving cardiopulmonary resuscitation, according to witnesses, while other people in disguise continued to sing and dance in the area, possibly unaware of the seriousness of the event.

“I still can’t believe what has happened. It was like hell,” said Kim Mi Sung, an official with a non-profit organization that promotes tourism in Itaewon.

Kim said he tried CPR on 10 unconscious people and nine of them were certified dead at the scene. The 10 were mostly women in witch costumes and other Halloween themes.

It is the worst recorded disaster in the country in years. By Sunday afternoon, authorities had confirmed 153 dead and 133 injured. The Ministry of the Interior indicated that the number of victims could increase by 37 because there are very serious people.

Ninety-seven of the dead were women and 56 men. More than 80% of the deceased are between 20 and 30 years old, and at least four were teenagers.

At least 20 of the dead are foreigners from China, Russia, Iran and elsewhere. An American is among the dead, the Home Office said in a statement.

An estimated 100,000 people gathered in Itaewon for the country’s largest outdoor Halloween festivities since the pandemic began. The government has eased COVID-19 restrictions in recent months.

Witnesses said there were so many people and vehicles on the streets that it was virtually impossible for ambulances and emergency workers to quickly reach the alley near the Hamilton Hotel.

By Saturday afternoon, more than 2,600 people had called or visited a nearby municipal office to report missing relatives and try to confirm whether they were among the victims of the disaster, according to the Seoul government.

The bodies of the dead were transferred to 42 hospitals in Seoul and nearby Gyeonggi province, according to the capital’s government, which said it had instructed crematoriums to cremate more bodies per day as part of support plans for the dead. funeral.

About 100 businesses in the Hotel Hamilton area agreed to remain closed until Monday to reduce the number of attendees who could go outside on Halloween.

Although Halloween is not a traditional holiday in South Korea, where children do not usually call houses to trick-or-treat, it is a popular celebration among young adults and costume parties in bars and clubs have multiplied in recent years. .

President Yoon Suk Yeol declared Sunday a week of national mourning and ordered flags at government buildings and public offices to fly at half-staff. During a televised speech, Yoon said that he will support the families of the victims, including preparing for their funeral, and caring for the injured.

He also asked officials to thoroughly investigate the cause of the accident and review the safety of other major cultural and entertainment events.