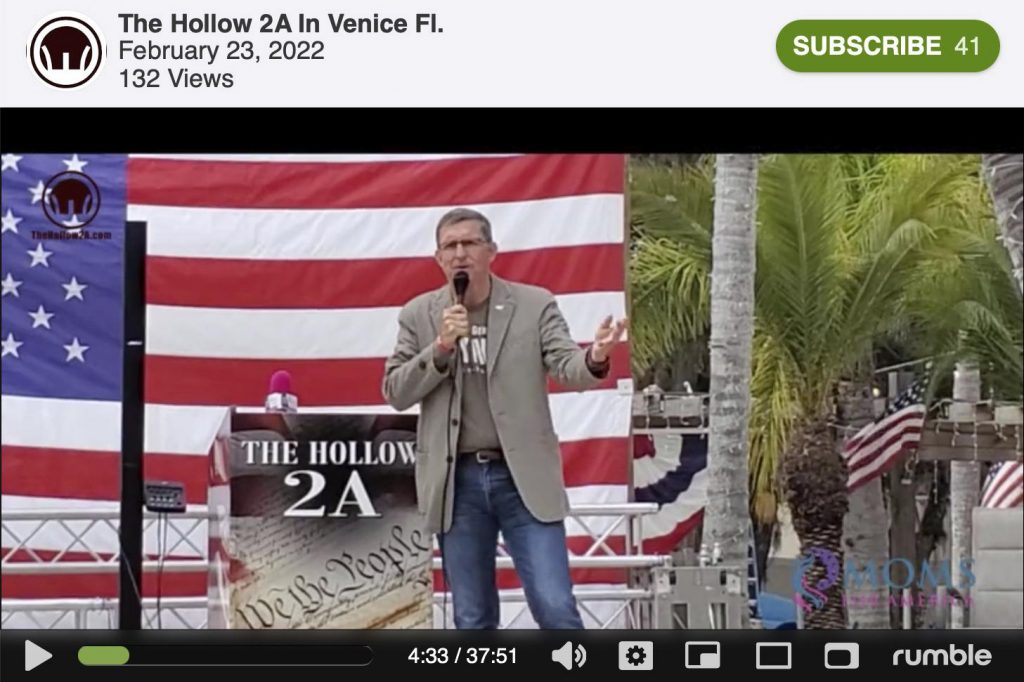 “These ‘wokes,’” said Michael Flynn, using a derogatory term for leftists and progressives, “have to be defeated. Our children’s lives and futures are in jeopardy when our school boards here, in Florida, and across the country promote such nonsense about (critical race theory) and transgenders,” he added in a Telegram comment posted on 6th August.

Within days this retired three-star Army general, who had spent decades dealing with international conflicts, spoke again of that election: “The damn wokes that operate in many counties and in many school boards across the country” should be defeated at the polls or censored. Some, he concluded, should be arrested.

Flynn, who just eight years ago headed the military’s intelligence services under the Obama administration, is today the lynchpin of a far-right Christian nationalist movement that is gaining more and more weight in the Republican Party. He makes presentations across the country and encourages his supporters to get involved in the politics of their communities, in order to promote change from below.

“Local activism has national impact,” Flynn says in his presentations.

This dispatch is part of an HPD and Frontline investigation that includes the documentary “Michael Flynn’s Holy War,” premiering Oct. 18 on PBS and online.

In Sarasota County, Flynn and his people created something of a laboratory for this model, mobilizing conservative elements through social media and public appearances, as well as events at a place called The Hollow, which has since become a referent for the extreme right.

He questions the democratic institutions of the United States, repeats lies about the 2020 elections, criticizes the media and promotes conspiracy theories about COVID-19. One of the groups he has brought into his campaign is the extremist organization Proud Boys.

The alliance between a man who was once President Donald Trump’s right-hand man and local extremists in Sarasota County began to take shape in many ways on January 6, 2021, when a Trump mob tried unsuccessfully to disrupt the democratic process and keep Trump in power despite having lost the elections.

Flynn was with Trump that day, as the president harangued his supporters, and a mob led by elements of the Proud Boys took over Congress.

Since then, the paths of Flynn and the Proud Boys have crossed several times.

The Associated Press and PBS’s “Frontline” said last month that Flynn’s movement wants Christianity to be the foundation of American life and institutions, abortion outlawed, the right to bear arms sacred, that concepts like systemic racism and gay and transgender rights are left untouched in schools, and that people who disagree are branded “Marxists” or perverts and excluded from civic life.

Flynn’s movement includes deniers of Trump’s defeat in the elections, opponents of the use of masks and vaccines, insurgents and Republican figures in city and state politics whose questioning of democracy and the institutions of the United States promoted the January 6 attack on the Capitol.

After the failed insurrection, Flynn settled in Sarasota County and surrounded himself with like-minded people. He established a headquarters in The Hollow, a four-block site with playgrounds, wedding halls and target practice spaces. Its owner, Victor Mellor Sr., is a former Marine who admitted on Facebook that on January 6, I “knocked on the front door” of the Capitol.

Mellor told “Frontline” that he was proud to have participated in the insurrection and once said he would organize a “meeting of the 6J (January 6) people” in The Hollow.

Flynn visited the site in May 2021. The next day, Mellor said on Facebook that “a war is being waged” and pledged to bring “all of our resources to the Flynns in this battle.” Since then, The Hollow has been something of a hub for Sarasota County’s far-right.

Thousands of people have attended events in The Hollow, where doctors hand out certificates exempting children from wearing masks in schools and getting vaccinated. Political acts abound with the presence of candidates for different positions, workshops are organized on the Bible, on food storage, wound care and access to a shooting club is facilitated.

Visitors enter through a windowless, bunker-like hallway, painted black and filled with slogans, some of which say the country has already seen violent revolutions and may experience one again. “Disarming people is the best way to enslave them,” says one. Another, by Thomas Jefferson, says that “the tree of liberty must be refreshed from time to time with the blood of patriots and tyrants.”

The hallway leads into a large open space decorated with American flags and palm trees. Attached there is a target shooting. Mellor said he incorporated a 10-foot-plus cross at Flynn’s suggestion.

HPD and “Frontline” reporters visited The Hollow in February, though without entering. Subsequently, Mellor invited the “Frontline” team and allowed them to make a very controlled visit inside. He also sat down for an interview, in which he said he was not a right-wing extremist and expressed concern that The Hollow is being painted as a “camp for militia.”

Flynn has visited The Hollow numerous times in the last year and supports it financially.

There Flynn was seen with elements of the Proud Boys. In photos and videos posted on Facebook and in a public Telegram chat, he appears alongside individuals wearing the black and yellow shirts worn by the Proud Boyd and other items bearing the organization’s logo. Sarasota attorney Ron Filipkowski, who monitors far-right figures online, posted a photo that appeared on Facebook in September 2021 of a man wearing a Proud Boys hat, a yellow shirt and a bandana, alongside Mellor and Flynn.

The Proud Boys are considered a terrorist organization by the Canadian and New Zealand governments. The Southern Poverty Law Center, a nonprofit legal organization, lists it as a “hate group,” a group that spreads hate.

At an event in The Hollow in October 2021, Flynn asked people to volunteer to work at the polls.

“I know exactly where the Democrats put their people, where they put their thugs,” he said.

Mellor told “Frontline” that some elements of the Proud Boys had volunteered before he knew they were members of the extremist group.

“They are fathers and husbands, with children, who come here. They are part of society,” he stated. He added that the Proud Boys “are an organization like many that we open our doors to here, like any other organization.”

It’s unclear if Flynn has a formal relationship with The Hollow. Both he and Mellor declined to answer questions on the subject.

Mellor said in writing that America’s Future Inc., a Flynn nonprofit, had recently donated $25,000 to purchase an observatory to be used by a science and nature program at The Hollow. Flynn also solicited donations for The Hollow.

Some Sarasota residents told the HPD and “Frontline” that the Proud Boys have tried to intimidate people at school board meetings, calling those who favor masks or sympathize with children “perverts.” gays.

Angela Wynn said she was harassed by a group of the Proud Boys when she attended a women’s rights event with her 10-year-old son. She indicated that she believes Flynn’s presence in Sarasota emboldens members of that group.

“In the past maybe they tried to hide who they were,” Wynn said. “But now they are enlarged.”

Carol Lerner, a retiree who condemns Flynn’s views, said she has visited The Hollow twice and keeps an eye on the Proud Boys’ activities.

He argued that Flynn, with the help of Mellor and the Proud Boys, is building an infrastructure to further attack democracy and uses The Hollow to create a community and teach children anti-democratic values.

“It is a nice, pleasant place. Fill a void. But when you see what they think, it’s scary,” Lerner said.

Flynn says he and his people changed the makeup of 250 school boards across the country, putting in people who support their views. He refused to say what meetings he was talking about. But what is certain is that this is what he did in Sarasota County, where he, Mellor and the Proud Boys supported candidates who they thought would oppose mandatory face coverings and vaccinations, ban questionable books and the teaching of classes. of sexual orientation.

Flynn is not limited to school boards. He ran for a seat on the Sarasota Republican executive committee.

An insider, Nick Radovich, said “take control of the Republican Party and get rid of the RINOS.” He was alluding to Republicans who they feel are not conservative enough.

In the weeks that followed, dozens of people applied to join the executive committee of the Sarasota County Republican Party, including Flynn and several of his family members.

On September 8, Flynn joined the executive committee, which has 270 members, and pledged to be an observer during the midterm elections.