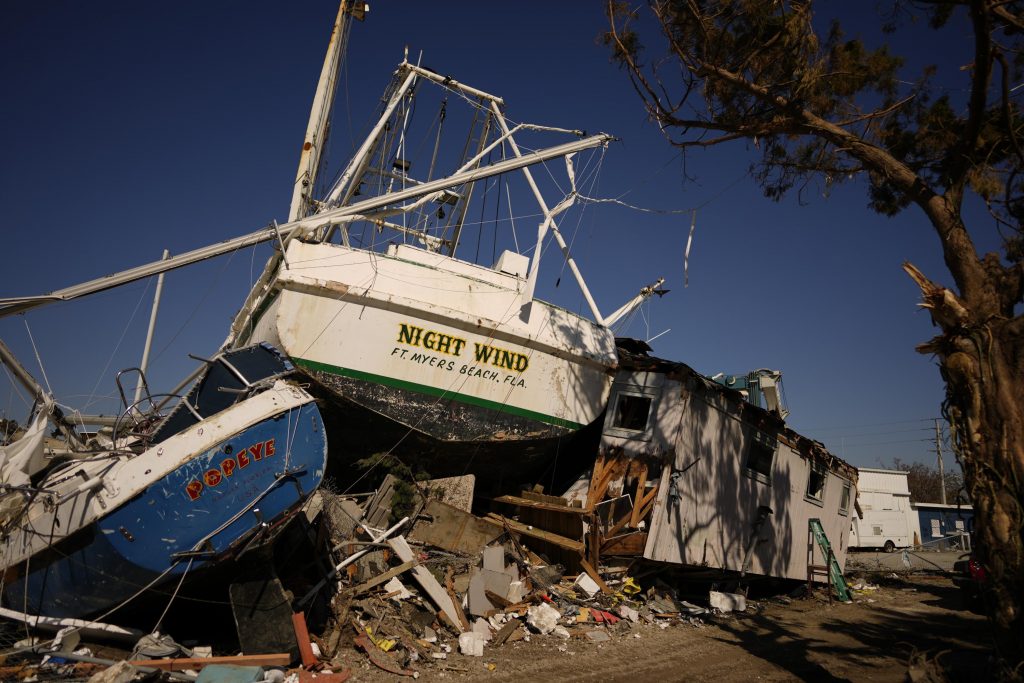 FORT MYERS BEACH, Fla. (HPD) — Southwest Florida’s fishing industry is racing against time and nature to save what’s left of a major shrimp fleet — and a way of life — that were battered by Hurricane Ian.

Fierce winds and waves caused two dozen shrimpers to end up on top of docks and homes in the port of Fort Myers Beach. Jesse Clapham, who oversees a dozen trawlers for a local seafood company, is trying to get the boats back out to sea as quickly as possible, before their engines, braces and pulleys atrophy from sitting too long. out of the water.

One of the two shrimpers that did not sink or wash up on dry land set sail on Sunday, but it is a very small achievement compared to the magnitude of the task ahead.

“We have 300 people working for us and none of them are employed right now,” said Clapham, who runs the fishing fleet for Erickson and Jensen Seafood, which brings in $10 million a year from shrimp catches. “I’m sure they’d rather tear this whole thing down and build a giant condo here, but we’re not going to give up.”

The wrecked docks, flooded office and a processing plant are located on the main street, next to another fishing company, the Trico Shrimp Co. There, a crane lifted reinforcements from the shrimper Aces & Eights, which is the first step in efforts to take it back to the water.

Nearby was the huge Kayden Nicole and Renne Lynn, in a car park.

Shrimp catching is the main activity in Florida’s fishing industry. It generated almost 52 million dollars in 2016, according to official statistics. Gulf of Mexico shrimp caught by Fort Myers Beach boats have been sold throughout the United States for generations.

Now it will be necessary to see when the capture can be resumed and if there will still be experienced people who can operate the boats.

Deckland Michele Bryant lost much more than a job when the boat she worked on washed up on dry land. She lost her house.

Shrimp crews spend up to two months at a time at sea, so much time that many of the workers don’t have a home on land.

Richard Brown’s situation is equally precarious. A Guyanese man working on a Miami boat when Ian came up, Brown tried to ride out the storm on one of four boats that were tied up next to a wall in the harbor.

“We try to weather the storm. The ropes were breaking. We replaced them, but when the wind started, we all went to dry land.”

There’s no way to catch shrimp in a boat surrounded by land, so Brown keeps busy cleaning barnacles from the Gulf Star’s hull. “It’s like I’m in a dry dock,” he said.

Seafood fleets are used to being struck down by storms off the Gulf Coast. Katrina wreaked havoc on fisheries from Louisiana to Alabama in 2005, and southern Louisiana is still reeling from last year’s Hurricane Ida. This part of Florida, however, hasn’t seen a storm like Ian in a century and people are now wondering what else could happen.

Dale Kalliainen and his brother followed in their father’s footsteps and took up shrimp farming. They own the trawler Night Wind, which ended up in a trailer park near a bridge.

He says high fuel prices, combined with low-cost imported seafood, were hitting the industry long before Ian made things worse.

“There used to be 300 boats in this port and now there are about 50,” he said. “It’s going to be years before this goes back to what it was.”

Clapham, a 47-year-old fleet supervisor, has spent his entire life on shrimpers. He says that the profit margin of this sector is very small and that now it will be necessary to see how it recovers from Ian’s passing.

“Sometimes you lose money,” he said.