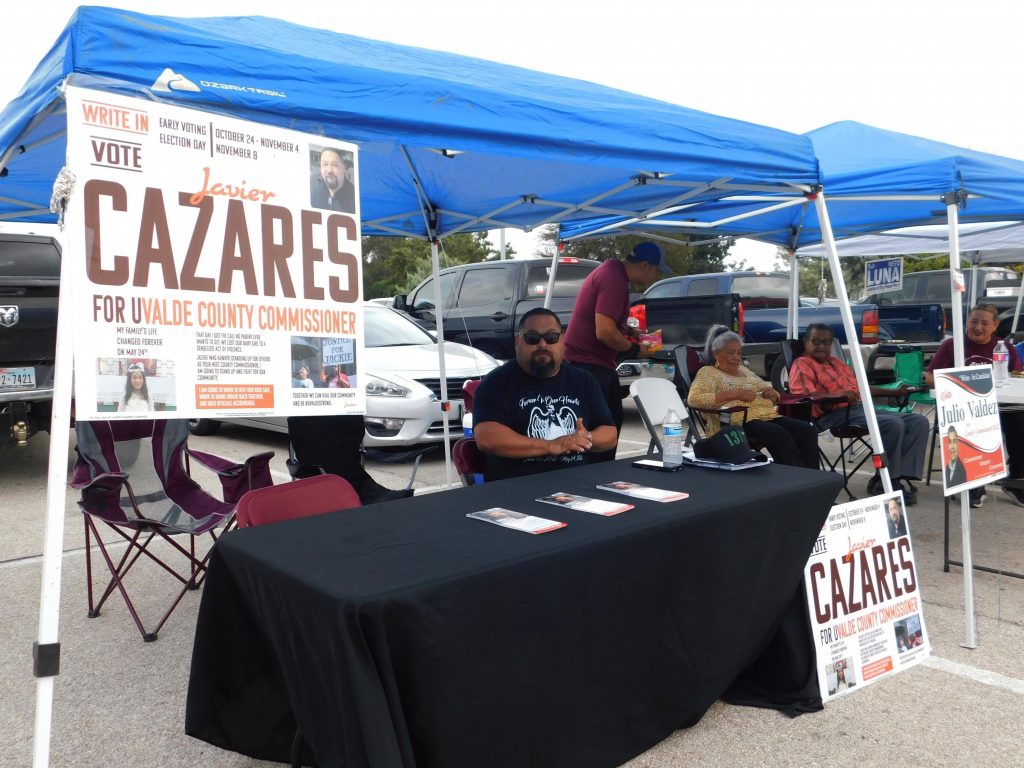 UVALDE, Texas, USA (HPD) — A few hours after voting began in Texas, Kimberly Rubio cast her ballot in the same building in the city of Uvalde where she waited in May to find out that her daughter, Lexi , was one of 19 4th graders shot to death at Robb Elementary School.

“If our kids aren’t safe, neither are your jobs,” Rubio said as he walked out of his polling place wearing an “I Voted” sticker. Nearby, another woman waved a Gadsden flag with the slogan “Don’t tread on me.”

The deadliest school shooting in Texas history has cast a long shadow over the midterm elections. It has prompted Republican Gov. Greg Abbott to step up his campaign against Democrat Beto O’Rourke and fueled a wave of television ads. On Thursday, a Republican congressman joined calls for the Texas state police chief to resign, a reflection of the anger that lingers five months after the massacre.

But with more than 2 million votes already cast in Texas, the Uvalde families who have been most critical since the May 24 attack face an uphill climb to get bigger changes come Election Day, including a change in governor.

Abbott, who has rejected calls to toughen Texas gun laws in the wake of the shooting, has never trailed in the polls. He’s also capitalizing on headwinds facing Democrats nationally, who risk losing control of the House of Representatives, which could scupper the chances of toughening gun control laws at the federal level over the next few years. two years.

Democrats had hoped that the outrage generated in Texas by the latest in a grim series of mass shootings would mobilize voters to go to the polls. As of Thursday, turnout was below 2018 levels in the state’s largest counties, which also have the highest concentration of Democratic votes. There is still another week of early voting left.

“We’re still in a very Second Amendment-friendly state” of the Constitution, said Matt Langston, a Republican political strategist from Texas, where many residents proudly proclaim their constitutional right to bear arms.

School safety remains an important issue for voters, he said. “But that doesn’t necessarily translate to: ‘We’re going to tighten restrictions on guns.’ It seems more like, ‘We have to protect the place where we send our children.’ It’s kind of a nuanced answer,” Langston said.

Republican Rep. Tony Gonzales, whose South Texas district includes Uvalde, this week became the first leading GOP figure to call for the resignation of the state’s police chief over the hesitant police response and shifting statements from authorities.

Victims’ families have kept up pressure on Col. Steve McCraw, head of the state Department of Public Safety, who said Thursday that his police department “didn’t fail” Uvalde. Two officers have been fired, others are under investigation, and the city’s school superintendent abruptly announced his retirement this month.

But even a few blocks from Robb Elementary School, where a huge offering of wooden crosses and stuffed animals remains outside the closed campus, there are reminders that the shooting is not the biggest concern for many voters.

“I don’t think that has anything to do with my vote,” said Dolly Schultz, 52, a Navy veteran and chair of the local GOP constituency. “There were a lot of failures, with the police and everything else. But most of those people are not running for public office, so I don’t think that will have a real impact on my vote.”

President Joe Biden’s most recent arguments ahead of the November 8 election focus on economic issues, amid runaway inflation and fears of a recession. An Associated Press-NORC Center for Public Affairs Research poll in June found that about 30% of Americans named gun policy as one of the top issues facing the country.

In 2018, Florida lawmakers enacted new gun restrictions just three weeks after the Marjory Stoneman Douglas High School massacre. In that same period, Texas Republicans — who are poised to maintain a large majority in the state legislature — have gone in the opposite direction, expanding access to guns after the mass shootings at Santa Fe High School in the suburban Houston, and at an El Paso Walmart.

Fred Guttenberg, whose 14-year-old daughter Jaime was one of the 17 people killed in the Florida shooting, said his advice to Uvalde’s parents is not to get frustrated or discouraged.

Among the places where you can vote early in Uvalde is the civic center where parents were asked to wait for the day of the May 24 shooting. In the parking lot Monday, Javier Cazares set up a blue awning and sat behind a table with three stacks of campaign pamphlets on the first day of early voting, in which more than 700 votes were cast in the county.

His daughter Jackyln, 9, was killed in the shooting. Now he is running as an unregistered candidate for Uvalde County Commissioner. “Some people listen to us, others prefer to turn a blind eye. But we are not going to stop doing this,” said Cazares.

When parents of other children killed in the shooting came to vote together, they each held pro-Cazares signs as they examined a sample ballot to learn how voting works for unregistered candidates.

“We’ve had people fighting for the last 15 years, from Columbine to Virginia Tech, there are a lot of people who are still fighting,” Cazares said. “That’s going to be me from here on out.”