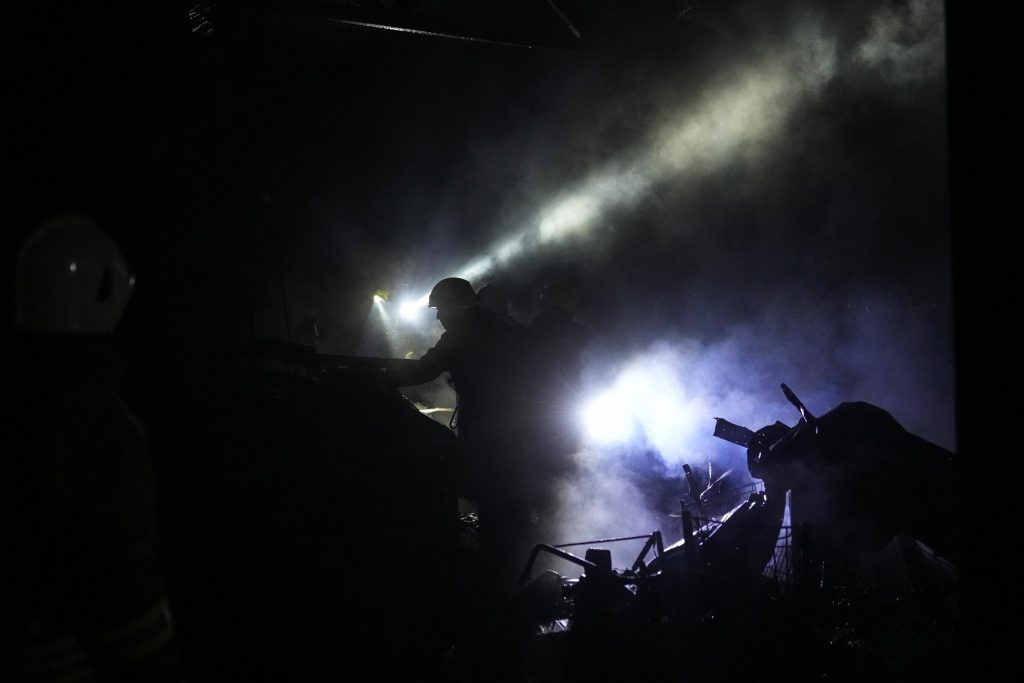 KHARKIV, Ukraine (HPD) — A truck bomb ignited a fire and caused part of a bridge linking mainland Russia to the annexed Crimean peninsula to collapse on Saturday, Russian authorities said. It is a key supply artery in Moscow’s faltering war effort in southern Ukraine.

The Kremlin-backed speaker of Crimea’s parliament immediately blamed Ukraine, although the Russian government did not second the criticism. Ukrainian authorities had repeatedly threatened to attack infrastructure and some celebrated the attack, but kyiv did not claim responsibility.

The attack came a day after Russian President Vladimir Putin’s 70th birthday and is a humiliating setback that could lead him to escalate the war.

The explosion of the vehicle caused a fire in seven cars of a train carrying fuel, resulting in the “partial collapse of two sections of the bridge”, explained the Moscow National Anti-Terrorism Committee, which did not immediately blame anyone for the incident.

The Crimean peninsula has symbolic value for Russia and is key to maintaining its military operations in the south. If the bridge were to be disabled, it would be much more difficult to get supplies to the area. Although Russia seized areas north of Crimea at the start of its invasion of Ukraine and opened a land corridor there along the Sea of ​​Azov, an offensive by troops from kyiv is trying to recapture the territory.

The bridge has sections for cars and trains. The Russian authorities specified that the explosion and the fire caused the collapse of two sections of one of the two links to the bridge for road traffic, while the other remained intact.

The Russian Energy Ministry said Crimea has enough fuel for 15 days and is working on refueling lines.

The circulation of passenger trains on the bridge has been suspended until further notice. Putin was informed of the incident and ordered the creation of a government committee to manage the emergency.

The 19-kilometre (12-mile) bridge over the Kerch Strait, linking the Black Sea and the Sea of ​​Azov, is the longest in Europe. It cost billions of dollars to build and is a crucial link to the Crimean peninsula, which Russia annexed from Ukraine in 2014.

Russia opened the first part to vehicular traffic in May 2018. The parallel rail structure was opened a year later.

The $3.6 billion project is a tangible symbol of Moscow’s claims to Crimea. It was the only land connection between Russian territory and the peninsula until Kremlin troops seized more Ukrainian territory at the northern end of the Sea of ​​Azov after heavy fighting, especially around the city of Mariupol, earlier that year.

The speaker of the Crimean parliament blamed Ukraine for the incident but downplayed the severity of the damage and said it would be repaired immediately.

“Now they have something to be proud of: in 23 years of management they failed to build anything worthy of attention in Crimea, but they managed to damage the surface of the Russian bridge,” Vladimir Konstantinov, chairman of the State Council of the Republic, wrote on Telegram. .

On the other hand, the parliamentary leader of the Ukrainian president’s party, Volodymyr Zelenskyy, stopped short of claiming that kyiv was responsible for the incident, but seemed to present it as a consequence of the seizure of Crimea and Moscow’s attempts to integrate it.

“Illegal Russian construction is starting to crumble and catch fire. The reason is simple: if you build something explosive, sooner or later it will explode,” said David Arakhamia, leader of the Public Server formation, on Telegram.

“And this is just the beginning. Of all things, reliable construction is not something Russia is particularly famous for,” she added.

Other Ukrainian officials showed a more festive attitude, although they also did not claim responsibility. Secretary of the National Security and Defense Council Oleksiy Danilov posted a montage on Twitter with the Kerch Bridge in flames on the left and the video of Marilyn Monroe singing her famous “Happy Birthday, Mr. President” on the right.

A Zelenskyy adviser, Mykhailo Podolyak, tweeted: “Crimea, the bridge, the beginning. Everything illegal must be destroyed, everything stolen must be returned to Ukraine, everything occupied by Russia must be expelled.”

In Moscow, Foreign Ministry spokeswoman Maria Zakharova stated that “the kyiv regime’s reaction to the destruction of civilian infrastructure shows its terrorist nature.”

In August, Moscow suffered a series of explosions at an airbase and ammunition depot in Crimea, indicating its vulnerability.

The incident on the bridge came hours after explosions rocked the Ukrainian city of Kharkiv early on Saturday, sending up huge plumes of smoke and triggering a series of secondary explosions.

The city’s mayor, Ihor Terekhov, said on Telegram that the early morning explosions were the result of missile attacks on the city center. The episode caused fires in one of Kharkiv’s medical institutions and in a non-residence building, he added. No casualties were immediately reported.

This incident came hours after Russia focused its increasingly turbulent invasion of Ukraine on areas it illegally annexed, as the death toll from an earlier crackdown on residential buildings in the southern city of Zaporizhia rose to 17. people.

Schreck reported from kyiv. Francisco Seco contributed to this report from Kharkiv.