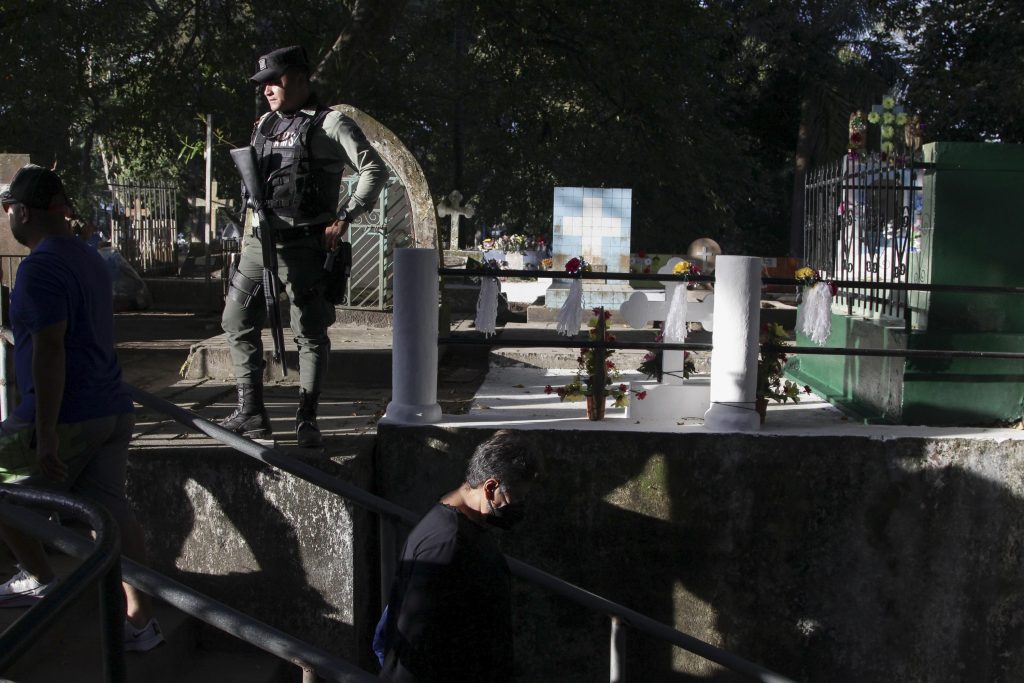 SAN SALVADOR (HPD) — El Salvador extended its strategy of persecuting gangs and began destroying the tombs of their members, identified with gang insignia, in the country’s public cemeteries, in what authorities say is an attempt to erase all traces of these criminal groups and prevent them from continuing to terrorize the population.

The mayor of Santa Tecla, Henry Flores, reported Wednesday that he had sent a gang of prisoners to the local cemetery to remove or destroy about 80 tombstones that had acronyms or inscriptions of the gangs, such as the MS-13 attributed to the Mara Salvatrucha, at a time of high circulation of visitors in the cemeteries.

Among the explanations of the local authority, it was assured that the gang members even performed “satanic rituals” in the tombs, although until now no scenes of this type had been reported in the country. Since the persecution of the gangs intensified, the government has maintained a campaign to erase all graffiti and gang markings in neighborhoods and communities.

“Our plan is to have zero graffiti so people feel safe,” added Mayor Flores.

Santa Tecla, one of the most populous cities in the country, is located on the western outskirts of San Salvador and for years has been one of the strongholds of the Mara Salvatrucha gang. Several of its members have ended up in jail and, according to the authorities, others would have sought refuge in rural areas as a result of a persecution campaign launched on March 27.

After two years of the pandemic, El Salvador has lifted most of the controls this year so that the population can visit their deceased relatives in cemeteries, although police controls have been maintained on entrances to prevent the entry of armed people. The police have also carried out preventive patrols in all the cemeteries.

“There is a lot of joy to visit relatives who have passed away. Before, it was normal to see gang members inside the cemetery, but today there is no danger,” Juan Escamilla, who came to leave flowers at the grave of a relative, told The Associated Press.

The deputy minister of Justice and director of Personal Centers, Osiris Luna, reported on his Twitter account that with the participation of gangs of prisoners “in the confidence phase”, supported by units of the National Civil Police, they proceeded to destroy tombstones and tombs with badges of gang groups in the cemeteries of Santa Tecla and Colón, in the department of La Libertad.

Luna, who oversaw the destruction of the graves, said the gang members don’t deserve “any recognition.” For this reason, she assured that the destruction of all traces of these groups, whom she described as “terrorists”, has been promoted. “In this country, gangs no longer have a place,” emphasized the deputy minister.

The National Civil Police reported on their social networks that residents of Candelaria de La Frontera, in the department of Santa Ana, in the west of the country, denounced that in the cemetery of that municipality there was a tomb with a plaque alluding to MS-13 , which was later destroyed.

The official harassment policy against the gangs came after 62 homicides were reported in one day on March 26, a level of crime that had not been seen in El Salvador for a long time. Congress approved the state of exception that limits freedom of association and suspends the right of detainees to be duly informed of their rights and the reasons for their arrest. Nor do they have the right to the assistance of a lawyer.

That same month, the Salvadoran Congress also reformed the Penal Code so that being part of a gang is considered and punished criminally. The sanction can reach a sentence of 20 to 40 years in prison. In the case of the ringleaders, the possible sentences rise from 40 to 45 years.

In crimes related to organized crime, which includes gangs, 20 years in prison are applied to adolescents over 16 years of age and up to 10 years to those over 12.

Since the emergency regime came into force, the authorities say they have captured more than 56,000 suspected gang members, of which 850 have already been released.

Social organizations maintain that in six months of this regime they have documented more than 4,000 cases of human rights violations and the non-governmental organization Cristosal affirms that 80 people have died in state custody.