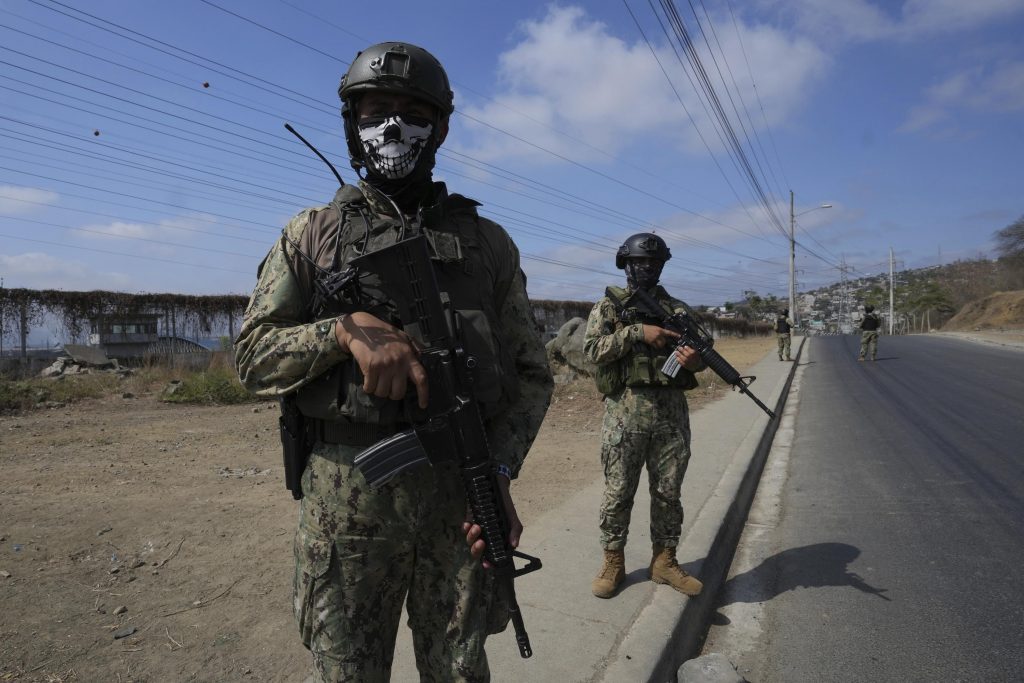 QUITO (HPD) — The president of Ecuador, Guillermo Lasso, assures that the crime figures have decreased during the state of emergency, in the delivery of a post-mortem decoration to seven police officers killed in the outbreak of violence at the beginning of November that motivated restrictions and increased controls.

During an official postmortem ceremony to award seven police officers, the president defended that the reduction in the number of violent deaths in Guayas, Esmeraldas and Santo Domingo was due to his government during the state of emergency decreed in November “to control criminal threats.”.

The presidential statement was accompanied by figures from the Ministry of the Interior, in a comparison made between the fifteen days before the state of emergency came into effect and the 17 days after, which conclude that there was a decrease in violent deaths in the main cities of those provinces.

In Guayaquil, the most violent in the country, the figures offered reflect that it went from 79 to 65 murders, in Esmeraldas, from 34 to 19 violent deaths and Santo Domingo de los Tsáchilas from seven to two.

The Government associates this decrease in crimes with the operations carried out on a national scale, with which 29 criminal gangs have been dismantled, 3,322 people have been arrested, and 389 firearms and 483 bladed weapons have been confiscated, according to the report presented.

The detainees include 74 who are related to organized crime and, according to the official explanation, also to the attacks at the beginning of November in which the seven decorated policemen died and which generated the declaration of a state of emergency.

Among the measures adopted, the leaders of various criminal organizations were transferred to a maximum security prison in Guayaquil, which led to clashes in the prisons. and a riot in a Quito prison that left 10 prisoners dead.

The president assured in his speech that the investigations and sanctions of those responsible will remain vigilant, after which he awarded the newly created “medal of valor” to the relatives of the fallen uniformed officers.

A series of explosions and attacks on police units and personnel in Esmeraldas and Guayaquil, as well as clashes in prisons with detained prison officers, led to the declaration of a state of emergency with a night curfew in two provinces. After four days, it spread to a third. It is valid until December 15, although restricted circulation hours have been reduced from one to five in the morning.

Fausto Salinas, commander of the Ecuadorian Police, affirmed that he has faced the enemy “firmly” affecting the “criminal economy”, with the withdrawal from the market of more than 170 tons of drugs and almost 8,000 weapons so far this year . In the same act, he pointed out that there have been 713 assaults on police officers, 208 assassination attempts, 778 police officers injured and 77 killed in the line of duty.

Jéssica Salazar, widow of one of the police officers, stated at the award ceremony that nothing will return their relatives, but that she hopes that her departure “has not been in vain and serves as an example and motivation.”

For the specialist in security issues, Colonel Mario Pazmiño, what has happened is that “much of the crime has displaced”, for which reason he denies that there is efficient control by the State. As he shows, he mentions that the authority “cannot enter different sectors in the territory, which gives rise to criminal governance.”

In dialogue with The Associated Press, he stated that neither the state of emergency nor the curfew attack substantive issues such as corruption in prisons, overcrowding, social reinsertion or the budget. This was evidenced, for example, with a prisoner escape from the Guayaquil prison in the middle of the state of emergency.

The country’s authorities link the wave of violence in the streets with the massacres that occurred in the Ecuadorian prison system, due to a struggle for power and territory between criminal gangssome of them related to international cartels, especially Mexican ones that dispute routes for drug trafficking.