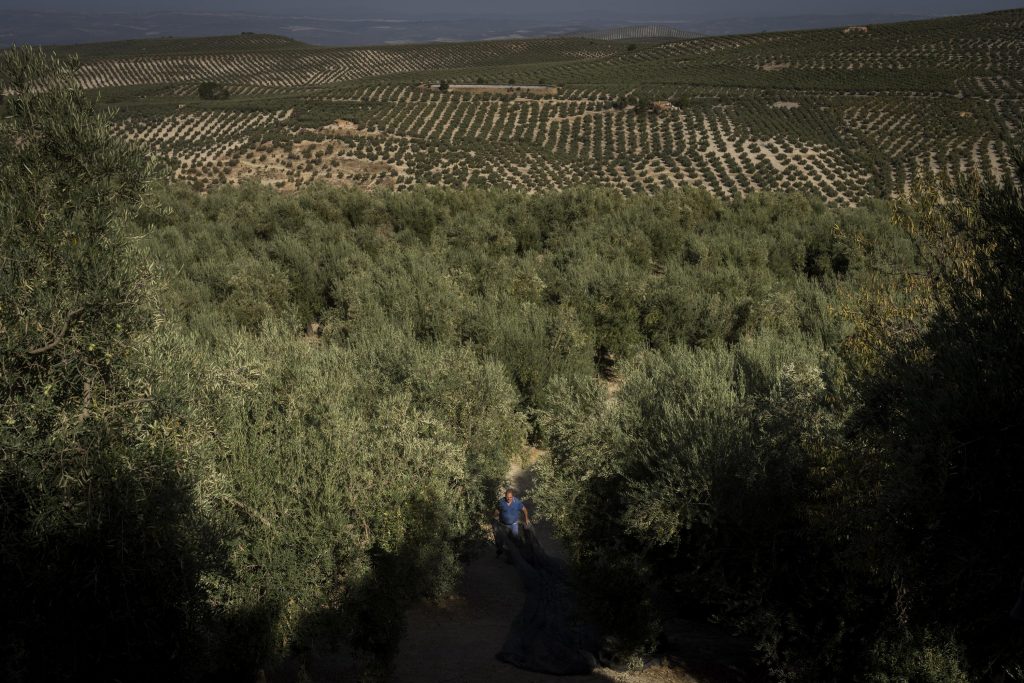 QUESADA, Spain (HPD) — An extremely hot and dry summer that shrunk reservoirs and sparked forest fires now threatens the most emblematic of Spain’s traditional crops: the olives that make the European country the largest producer and exporter of the small green fruits, that are pressed to produce golden olive oil.

Authorities and industry experts estimate that the fall harvest of Spanish olives will be around half that of last year, another victim of global weather changes caused by global warming.

“At 57 years old, I have never known a year like this,” said Juan Antonio Delgado as he walked past his rows of olive trees in the town of Quesada, in southeastern Spain. “My intention is to hold out as long as I can and when expenses are above production we will all have to go on strike.”

The high temperatures in May killed many of the flowers in the Spanish olive groves. Those that survived produced small fruits due to lack of water. Although a little less moisture can produce better olive oil, the recent drought has been too severe.

This has been the third driest year in Spain since records began in 1964. The Mediterranean country also had its hottest summer on record.

Spain’s 350,000 olive growers typically harvest in early October, before the fruit is fully ripe, to produce oil. But his olives are still too small, and Delgado has left most of the fruit on the trees in hopes of rain. So far no luck.

If the desired rain does not arrive soon, the country’s olive production will be almost half that of last year, according to the Spanish Minister of Agriculture.

“The campaign forecast for this year is notoriously low,” Agriculture Minister Luis Planas told The Associated Press. “The Ministry does not reach 800,000 tons.” By comparison, the 2021 harvest reached 1.47 million tons.

Olive groves cover 2.7 million hectares (6.8 million acres) of land in Spain, 37% of it in the province of Jaén, known for its “sea of ​​olive trees”, and where Delgado works.

The European organizations, known by their acronyms COPA and COGECA, warned in September that the harvest could be reduced by 35% due to drought and high temperatures. The two groups described the situation in Spain as “particularly worrying”.

The smaller harvest boosts prices, according to Italian olive oil producer Filippo Berio. The company noted that the price of European olives for extra virgin oil has skyrocketed from €500 per tonne ($495) to €4,985 ($4,938).

In addition to warmer than normal weather, the drought affects Spanish olives in other ways. Agricultural consultant Antonio Bernal has seen forgotten diseases return during his visits to Quesada. He believes that warmer winters help fungi to proliferate.

Bernal also fears that the most widely grown variety of olives in Jaén may not be able to adapt to such a sudden change in climate.

“(The olive grove) will not be able to adapt to such rapid change. The only way, the only solution would be to avoid change,” Bernal said.

If the olive branch is the universal symbol of peace, the olive grove is a symbol of the Mediterranean. Plato was said to share his wisdom under an olive tree, and its widespread cultivation in Spain dates back to the Roman Empire.

When the season was too dry for orange and lemon trees, the olive trees were expected to continue to thrive. The low, gnarled trees cling to dry, stony ground and seem unscathed in full sun. In the scorching middays of summer, the microscopic pores in its leaves close to reduce water loss.

“In Jaén, the olive tree has been our lifelong culture. It has been our currency to survive and feed our families,” said farmer Manuel García.

But even the iconic olive tree has its limits. These days, the fruit embodies the challenges of communities in a hotter, drier environment.

Researcher Virginia Hernández is an olive tree expert based at the Institute of Natural Resources and Agrobiology in Seville, Spain. She is now studying how to adapt irrigation practices to drought, and specifically to what extent “suboptimal” amounts of water can be used to promote sustainability.

If scant rainfall becomes the norm, harnessing water becomes crucial, Hernández said. She believes smarter use of high-tech irrigation systems, combined with more drought-resistant tree varieties, could save the industry as the planet warms.

Climate experts estimate that the Mediterranean will be one of the fastest-warming regions in the coming years. The challenge is convincing farmers that reducing their current output a bit could save their livelihoods tomorrow, an adaptation that olive trees are especially adept at, Hernandez said.

“The olive tree is a paradigmatic species in the sense that it is very resistant to lack of water,” he said. “I can’t think of another (that could) resist better than the olive tree. The truth is that the olive tree suffers a lot”.