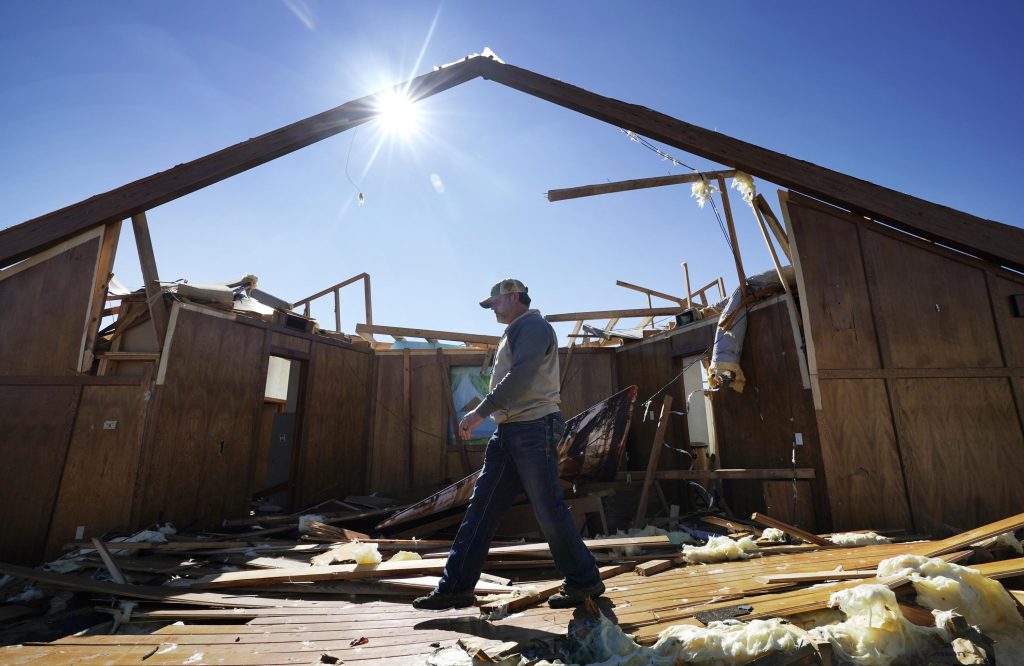 IDABEL, Okla. (HPD) — Residents of southeastern Oklahoma and northeast Texans began assessing damage Saturday, working to recover and giving thanks for surviving a storm that swept from Dallas to northwestern Arkansas. , which caused tornadoes and flash floods that left at least two dead and many injured, as well as homes and buildings in ruins.

Oklahoma Governor Kevin Stitt visited the town of Idabel to learn about the damage. He said on social media that all the houses had been inspected and that a 90-year-old man had died. Keli Cain, a spokesman for the state Department of Emergency Management, said the nonagenarian’s body was found at his home in the Pickens area of ​​McCurtain County, about 36 miles (58 kilometers) north of Idabel.

Judge Doug Reeder, of Morris County, Texas, indicated in a message on social networks that a person appeared due to the tornado in the extreme northeast of Texas county without elaborating on details. Reeder and other county officials did not immediately respond to requests for additional comment.

For its part, the Oklahoma Highway Patrol reported that a 6-year-old girl drowned and a 43-year-old man was missing after their vehicle was swept away by currents off a bridge near Stilwell, 217 kilometers (135 miles). ) north of Idabel.

The drowning was not officially attributed to the storm and the corresponding investigation will be carried out by a medical examiner, Cain said.

Stitt declared a state of emergency Saturday afternoon for McCurtain County, where Idabel is located, and neighboring Bryan, Choctaw and LeFlore counties.

The declaration is a step toward accessing federal funding and assistance and paves the way for state agencies to make disaster recovery purchases without restrictions on bidding requirements.

Texas Gov. Greg Abbott said damage assessments and recovery actions are underway in the northeast of the state and encouraged residents to report damage to the state Division of Emergency Management.