Skip to content
Home » Cristina, the former minister who captures votes for Bolsonaro 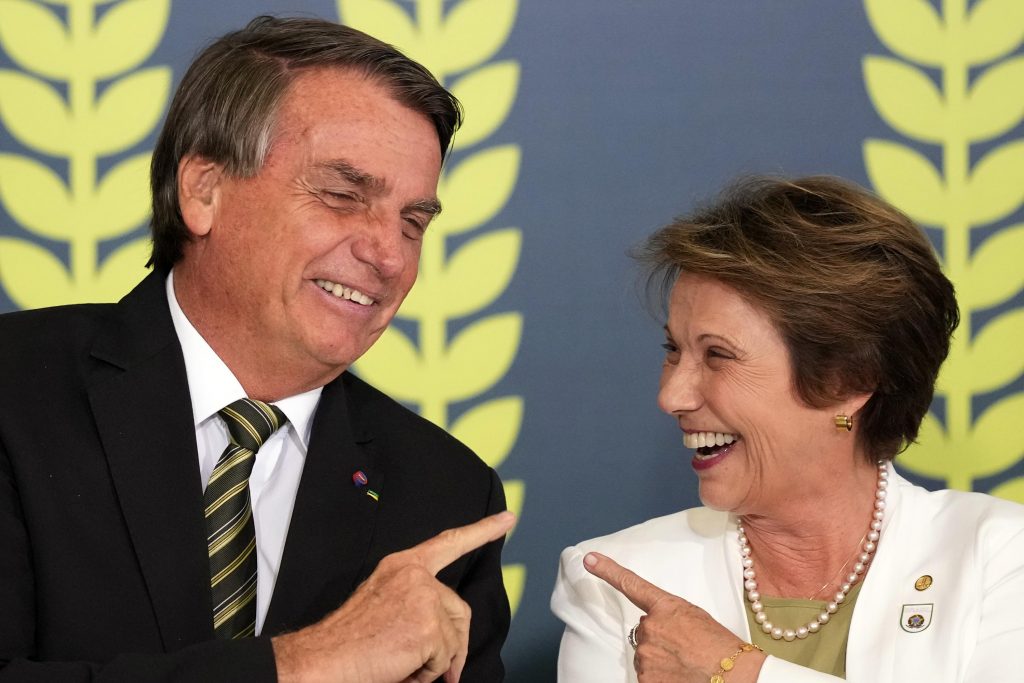 CAMPO GRANDE, Brazil (HPD) — Tereza Cristina serves coffee to visitors at her home, surrounded by soy plantations. Guests seated in wicker chairs are friends and farmers eager to hear what they can do to help get Jair Bolsonaro re-elected president.

Cristina, former minister of agriculture in the Bolsonaro government, is the winning card for the far-right president at the Mato Grosso do Sul stadium, with an important agricultural sector that is key for Bolsonaro, who is running for the presidency with the leftist Luiz Inácio. Lula da Silva.

Cristina, 68, resigned as minister in March to seek a seat in the Senate, which she won with 61% of the vote on October 2. She got more votes than Bolsonaro himself in the first round of the presidential election in a state of 2.8 million people.

Lula has a slight lead over Bolsonaro in the polls and any vote the president gets could be key in Sunday’s referendum.

The economy of the state, and of the entire country, flourished during the Lula government, from 2003 to 2010. And since then the state has weathered economic downturns well. Its GDP has risen more than 10% in real terms since 2012, while that of the rest of the country has contracted, according to Sérgio Vale, the chief economist at MB Associados.

“In those years (when she was minister), I worked much more for small farmers than for large ones. The big ones don’t need the government. What they need is freedom (to operate). Small producers do need us,” Cristina said on Monday, during a conversation with landowners from the state of Minas Gerais. She was alluding to Bolsonaro’s policy of not intervening in the economy and giving some support to small, family-owned farming operations.

His preaching seems to be paying off.

“I am going to vote for Bolsonaro largely because of her,” said João Pedro Bernardy, a rancher and director of a warehouse who identifies as a moderate and has soy plantations in Sidrolandia, near Campo Grande, the state capital.

Bernardy believes that the agricultural sector may have problems if Bolsonaro is re-elected. He argued that the deforestation of the Amazon, which many attribute to the president, may cause them to impose restrictions on Brazil’s exports.

But he is also bothered by the history of corruption in Lula’s Workers’ Party, the lynchpin of numerous scandals, including one for which Lula himself was jailed until the Supreme Court overturned the ruling.

He indicated that Cristina has handled herself well and recalled that Bolsonaro did not prevent workers in the agricultural sector from continuing to carry out their tasks during the coronavirus pandemic and gave them benefits. The president also pushed for road projects and other infrastructure in the countryside to help produce reach markets.

“Their presence guarantees exports. He knows that we cannot depend exclusively on China,” Bernardy said, alluding to Cristina’s efforts to find more buyers for Brazilian products.

Mato Grosso do Sul is one of the great agricultural centers in the center and north of the country, where 16 million people live. The economic flourishing of the region can be seen in Campo Grande, where flashy places like a Peruvian-Japanese fusion restaurant and gated communities with tennis courts and Jaguar, Land Rover and Harley-Davidson dealerships are springing up.

The Brazilian agricultural sector has flourished in recent years, regardless of the type of government and despite the bad times that the Brazilian economy experienced, largely due to the boost that exports to China took from the early 2000s. .

It seems that Bolsonaro is rapidly gaining ground in Mato Grosso do Sul and that Lula is losing it. Street signs supporting Bolsonaro abound and there are very few of Lula.

That bothers Militino Domingos de Arruda, a 78-year-old leftist who used to work on cattle ranches and now survives by collecting recyclable things. He says that tens of millions of Brazilians go hungry because the agricultural model is export-oriented.

He complains that Lula ceded the region to focus on other parts of the country.

“His campaign here is so weak that I hardly see stickers, flags or anything that attracts voters,” Arruda lamented in his house, full of PT flags and Lula posters. “Lula didn’t even come here.”

Lula, however, received the support of moderate senator Simone Tebet, who is from Mato Grosso do Sul, where his family has large tracts of land where he grows sugar cane and other products. Tebet, 52, finished third in the October 2 referendum, after which she encouraged people to vote for Lula.

“It was the hardest decision of my life,” Tebet told The Associated Press by phone. “A very conservative Congress was elected, governors who support Bolsonaro, and the democratic center to which I belong collapsed. I had never campaigned for the PT.”

Tebet believes that the agricultural sector supports Bolsonaro out of unfounded fear of the Landless Rural Workers Movement, which for decades took unused land and responded with violence when there were forced evictions. The movement is a firm ally of the PT.

Tebet also stated that Bolsonaro’s conservative nationalism is well seen in the field.

“But this can change if Lula wins. I know my status,” Tebet said. “I know that our agricultural sector also fears the closure of markets abroad due to Bolsonaro’s policy against the environment.”

Jaime Verruck, secretary of agriculture for the center-right government of Mato Grosso do Sul, said he sees Cristina as a possible president of the Senate.

“Bolsonaro’s government was saved by Cristina’s Ministry of Agriculture. It was the only good thing that she was able to show in international forums,” she expressed.

Cristina likes María Nelzira, 36, a black woman who studied pedagogy and now heads a local agricultural cooperative. She knew how to support Lula. But she says that she will vote for Bolsonaro because she considers that he and Cristina gave a boost to the agricultural sector with initiatives to regularize land ownership and give access to loans in state banks.

“They corrected the chaos that was there, they addressed the main bureaucratic problems and that had a great impact on our cooperative,” said Nelzira. “Our income increased, now we have more help. People know that small farms help feed the country.”